A Note on War Aims 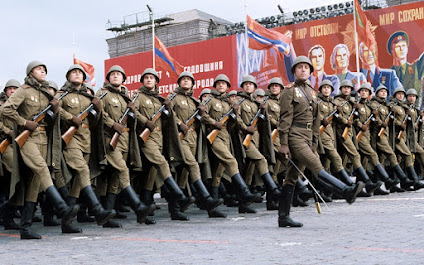 By now, the war between Russia and Ukraine has been going on for almost forty days. It remains difficult to get an accurate picture of the situation on the ground, largely because all of the information coming out of Ukraine is being filtered through thick clouds of propaganda. Go to BBC or CNN and you will see one story; go to SputnikNews, and you will see a completely different one.

Still, I happen to think that, owing to Russia having had a much stronger military position to begin with, Sputnik’s version of the story is closer to the truth.

I suspect that a large part of the collective West’s inability to think rationally about this conflict – even to the point of imagining that the Russian offensive is on the verge of collapsing when it clearly isn’t – stems from the West’s lack of imagination regarding war aims.

To begin with, it’s probably not an exaggeration to say that at least 90 percent of the rhetoric about war that you hear in the West is based on comparisons drawn from a single historical event – World War II. And World War II was an existential war: the regimes on its losing side did not survive to the present day in any way, shape, or form. Generally speaking, this was a good thing, because if Germany, Italy, and Japan had won… well, suffice it to say that a world remade in the image of the Axis powers is not one that you or I would wish to live in.

Such is the nature of the conflict from which most Europeans and Americans get 90 percent of their ideas about war.

Also, our collective pop culture is totally dominated by existential wars in which the bad guys are obvious stand-ins for the Nazis. Whether it is Star Wars or Lord of the Rings or Harry Potter or The Hunger Games or what have you, whenever we go to the movies or crack open a bestselling adventure novel, we are looking at a situation in which the heroes are forced to wage total war against an evil enemy who desires the complete destruction of their way of life. And the conflict cannot end until one side or the other is stomped into the mud.

The trouble is that, in the real world, most wars are not like that. If you look at the last few hundred years of Euro-American history, then what you see most often, in international wars, is a situation in which two countries – neither of which is wholly good or wholly bad – somehow come to blows, and fight until the stronger side achieves its war aims. And these war aims usually consist of disarming the losing nation’s military, extracting indemnities/reparations, and possibly seizing a disputed piece of territory (usually one in which there is already some degree of popular agitation for a change in ownership).

In comparison, situations in which one side’s war aims include the complete destruction of the enemy nation, the enslavement of its people, the extirpation of their language, culture, and religion, or the systematic execution of civilians are much rarer.

But it so happens that this second, smaller category happens to include the one war that gets more media exposure than all other wars put together, and which has also been used as a template by the creators of pretty-much every epic fantasy/adventure franchise in the modern world.

So what does any of this have to do with the situation in Ukraine?

Well, if you assume that Russia has the same war aims as Nazi Germany – the complete destruction of the enemy nation/ethnicity/religion – then it looks like the Russians are doing a poor job of it. Forty days in, they still have not taken the capital. Many of Ukraine’s roads remain open, so that refugee caravans and trucks carrying food and other essential supplies can traverse them freely. Also, Putin and Shoigu have recently withdrawn some of their troops from central Ukraine and redeployed them in the east, in a move that the Western press is portraying as a retreat.

But what does the situation look like from the point-of-view of a Russia with more limited war aims – i.e. where the goal is simply to demilitarize Ukraine, prevent it from ever joining NATO, and secure the independence of the Donetsk and Luhansk People’s Republics? Well, in that case it looks like Russia is winning.

One other potential consequence of the West’s lack of imagination concerning war aims – a hazard which I am glad to say ended up sputtering out – was the casual attitude toward guerrilla warfare held by some Ukrainians, and also by what seems like a majority of the Western press.

In short, it was very common, in the early days of the war, to read stories about how Ukrainians of all ages and sexes were going out to fight the Russians with no chain of command and no uniforms, using whatever improvised weapons they could get their hands on.

On the one hand, this is the sort of thing that looks great in an action-adventure movie like Avengers or The Hunger Games. On the other hand, in real life it is a good way to get a lot of a civilians killed – first, because a disorganized, untrained, and poorly equipped fighting force is weaker, man-for-man, than a professional army, and second, because abolishing the distinction between soldiers and civilians is a good way of ensuring that a lot of violence will be done to civilians.

This is why the matter of francs tireurs – men (and a few women) who would dress in plain clothes, sneak up on an advancing enemy column, fire as many shots as they could get away with, and then melt back into the countryside – has been such a hot controversy in wars like World War I. When you’re a soldier, and you have good reason to believe than any civilian you encounter might be about to shoot or bomb you, then your own survival is likely to depend on your willingness to strike first.

Fortunately, the blithe promotion of guerrilla warfare that was so common early on seems to have won only a few converts, and most (though by no means all) of Ukraine’s civilians have proven content to keep behaving like civilians, or even to flee the country outright.

Now, there are situations in which guerrilla warfare makes sense – when the war is existential, and when the invaded nation has no conventional means of resisting the enemy. Again, think of World War II – if you are a Jew, or one of the Slavs whom Hitler and Himmler plan to work to death in vast slave-labour camps, and you’re hundreds of miles behind enemy lines, and your chances of being liberated by the conventional army are uncertain, then engaging in irregular combat makes sense.

Insurgencies, though quite costly in terms of civilian life, do in some situations have a proven record of working. (I trust that my audience does not need me to summarize the Vietnam and Afghanistan wars). Suppose, then, that the Ukrainians decided, like Ho Chi Minh and the Taliban did, that losing a lot more lives than the other side is an acceptable price to pay for ultimate victory. If they made this decision, and fought for long enough, could they win in the end?

Well, if Russia decided to set up a puppet government over all of Ukraine, then it’s likely that after a few years or decades of guerrilla warfare, it could be defeated, once the Russians decided they didn’t care about propping it up as much as the Ukrainians cared about tearing it down.

But yet again, we are projecting an imaginary set of war aims onto the enemy. Because if the Russians don’t want to control all of Ukraine – if they only want to secure the independence of the Donbass – then a Ukrainian insurgency is completely useless. After all, the whole reason this war happened was because the inhabitants of Crimea and the Donbass refused to accept the legitimacy of the new Ukrainian government which came to power after the 2014 coup, and have been fighting back, with Russian aid, ever since.

In conclusion, Russia’s position – thanks to Russia’s modest war aims – is much stronger than most people in the West are willing to admit. Yet this shouldn’t really surprise anybody.

After all, as the old saying goes, “politics is the art of the possible.” War, of course, is simply the “continuation of politics by other means,” and in both politics and war, the victory will often go to the side that does a better job of choosing attainable goals.