But in order to avoid interrupting my forthcoming post with a cumbersome explanation of my method, I’ve decided to lay it all out here instead. If you already know the method, or if the whole thing bores you, you can skip ahead. Otherwise, read on. 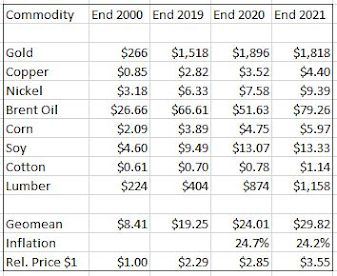 Above you see a table with prices for eight commodities, both at the turn of the millennium, and at the ends of the years 2019, 2020, and 2021. All data are from tradingeconomics.com. At the bottom of each column, I’ve included the geometric mean of the eight prices.

The “geometric mean” means that instead of adding together all the numbers and dividing by eight, I multiplied them all together and took the eighth root. This saved me the trouble of having to decide how much of each commodity to include in my “basket.” (If I used the ordinary average, it would make a big difference whether I included an ounce of gold or a gram of gold, a bushel of corn or a ton of corn, etc.)

With the geometric mean, if you double the price of gold – or of any other commodity – the number at the bottom of the column goes up by a factor of 1.0905 – and it does that whether you started with an ounce of gold or a ton of gold. Similar relations exist for any other logarithm. The upshot is that the process is neutral – the personal biases of the tabulator (me) don’t influence the outcome.

Now, I generally refer to the numbers calculated in this way as “commodity inflation,” because they reflect the price of commodities – that is, fungible goods like copper, cotton, and brent oil. What’s left out are non-fungibles like houses or college tuition. The weakness in this approach is that most of the things ordinary people spend money on are not commodities. The strength is that, because my method only looks at commodities, it can’t be gimmicked.

Suppose that the people who work at the CBO or the Fed or wherever sit down to calculate inflation, and notice that the average American family spends 2.5 times more on college tuition or health insurance or housing or what-have-you than they did 15 years ago. Is it because they’re actually getting 2.5 times more of what they’re paying for? Or is it because of inflation? Or is it some combination of the two?

The answer, of course, will depend on your politics. Which is why I don’t trust the numbers that come out of the CBO and the Fed. Their incentives to hide the true scale of economic decline are just too strong.

Now, commodities markets are more volatile than the economy as a whole, which means that the full force of the 24 percent inflation I’ve calculated for these past two years isn’t being passed on to ordinary people… yet. In due time it will be, since things like houses, and food and gas for the people who work at universities, have to be made from commodities like lumber, soybeans, and crude oil.

But at the same time, it’s hard to hide from the fact that inflation is hitting ordinary Americans hard nonetheless. Anyone who’s poor enough to pay attention to how much his or her food costs – and that’s a category that very much includes Yours Truly – knows by now that the true magnitude of the situation is being swept under the rug.

So if you’re reading this, and wondering why it feels like so much of what you eat costs two or three times what it did a decade ago… then I hope I’ve helped to make that mystery a bit clearer.