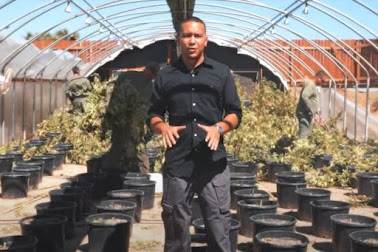 A few days ago, The  Daily Caller released its first investigative documentary: Cartelville USA. The film is short – only 36 minutes – and you can watch it here with a subscription or free trial. There is also an interview on the Federalist Radio Hour with the directory, Jorge Ventura, which is nearly as long as the documentary itself.

In case the title doesn’t already give it away, the topic of Cartelville USA is a string of communities in the California desert that have been taken over by drug cartels. The cartels grow marijuana in hoop houses on land that may or may not be theirs, using slave labor and stolen water. They pack heavy weapons and gun down whoever looks too much like a rival or a threat, and generally do as they wish.

“These drug cartels are wreaking havoc on the entire antelope valley, and nobody is talking about it,” says the narrator near the beginning of the film. “This is the cartels. We are very very close to driving down the freeway, and seeing bodies hanging from the overpasses. That is what's coming.”

Ventura’s disturbing look into the growing power of drug cartels on this side of the border caught my interest because it has two important political ramifications: one short-term and the other long-term. But before I discuss those in detail, a summary of what I learned from the documentary is in order.

The setting is, for the most part, in rural Los Angeles county, though it extends into neighboring counties as well. The inhabitants are, for the most part, old, working-class conservatives who settled there in their twilight years to get away from bustle of city life, only to be rudely surprised by what is going on. And you can tell that something is deeply wrong from the get-go by the fact that most of the people Ventura interviews (the sheriff and Congressman Mike Garcia being notable exceptions) have their faces blurred to avoid recognition.

Ventura and his crew reveal how a combination of Mexican, Chinese, and Armenian organized crime syndicates are growing marijuana in hoop houses in the California desert. Some growers own the land or are in league with absentee landlords, while others are just squatters. The hoop houses, complete with lights and irrigation systems, can be set up in just a day or two, and even when police get a search warrant, the law usually allows them to take only the marijuana plants, while leaving everything else, so the whole enterprise carries surprisingly little risk.

Labor is provided by illegal aliens brought from Mexico or China and forced to work by their traffickers; water is simply stolen, often from fire hydrants.

Most Californians are unaware of the severity of the problem: in their minds, since their state already legalized marijuana, they shouldn’t have to worry about this kind of thing anymore. “People just shrug their shoulders,” says Ventura. “Who cares, it's just pot, like, why are we even wasting our tax dollars fighting this issue?”

Yet Proposition 64, which passed in 2016, was in many ways a half measure. While Californians can now legally grow weed under some circumstances, there are enough licensing requirements, regulatory requirements, and production limits to ensure that it’s still much more profitable to do it illegally – and that’s before you add in the fact that, due to federal law still frowning on everyone involved in the cannabis trade, no money earned by selling the stuff can be deposited into a bank account. Then tally up the costs saved by using stolen water and forced labor, and it’s easy to see why working outside the law is still the most profitable option.

The ultimate takeaway from all this is that things that Americans are used to hearing about on the other side of the border are going to be start happening on our own side, too, if enough people don’t wake up to the gravity of the situation.

Or, as an interviewer from The Federalist put it when he began querying Ventura: “The Cartels generally know you can kill as many Mexicans as you want in Mexico, you can slave-trade as many humans as you want from foreign countries, but you don't mess with Americans, [or] Americans start to freak out. It seems to be one of the very few remaining ideas of Pax Americana in the world as cartels know that's bad for business. But you worry that might be changing?”

Yes, Jorge Ventura does worry that might be changing.

Now, I promised at the beginning that I would discuss two lines of political ramifications – one short-term and one long-term – of the situation in Antelope Valley.

The immediate takeaway is that the leftists who govern the United States in general, and California in particular, are completely blind to serious national problems – even problems with high human costs born largely by the people they claim to care about the most – when those problems don’t fit into their political worldview.

If you’re a Democrat, then one of the ways you prove to your party’s base that you’re a good Democrat is by going soft on crimes involving politically sensitive classes of people: in this case, Hispanics and illegal aliens. (And it is of no consequence that Hispanic people who have to deal with these crimes up close –  like Jorge Ventura and Mike Garcia – are often vehemently opposed to your nonchalance).

The same goes for reporters in the mainstream media. If you work for the New York Times, CNN, NPR, or the like, you will not advance your career by drawing attention to the fact that the wide-open border and the lenient attitude toward crime that gave rise to “Defund The Police” has nasty consequences for poor people and racial minorities.

It is rather disturbing that this has become a partisan issue; after all, in a healthy republic, defending the lives and property of one’s countrymen would be something that all office-holders feel strongly about. But at the moment, it isn’t, and unless more voters start supporting people like Mike Garcia instead of the rabble who talk about defunding the police, we’re going to get more of the same.

One can argue, quite convincingly, that the road to Cartelville USA starts with the kind of politicians who are willing to let BLM burn down police stations, and then say that the important thing is that none of the “protestors” were harmed by the cops.

As for the long-term ramifications: if the US Government doesn’t somehow get put into the hands of people who really, really want to turn things around – and by now, a turnaround is looking increasingly unlikely – then we are looking at the beginning stages of state formation.

This is a concise way of saying that, the longer this goes on, the more and more the cartels will take on the attributes of being governments in their own right. They will hold undisputed sovereign authority over their territory and its inhabitants, they will make and enforce laws, they will collect taxes, the will wage war and, if victorious, they will dictate the terms of the peace treaty, just like their counterparts already do in Mexico.

Perhaps you are familiar with the Battle of Culiacán, fought in October of 2019, in which 700 Sinaloa gunmen, wielding 50-calibre rifles, rocket launchers, grenades, and armored vehicles, defeated the Mexican National Guard, seized control of a city of 700,000 people, and demanded that the Mexican government release the imprisoned son of the Sinaloa Cartel’s leader or else face a massacre. President López Obrador complied, as many people expected him to; he had, after all, run for office on a platform of rapprochement with the drug cartels.

America’s Culiacán moment is still a long way off – decades away, in my opinion – but the longer politicians ignore events like the ones that Jorge Ventura is trying to bring to light in Cartelville USA, the closer that moment gets.

This essay was originally published in American Thinker.