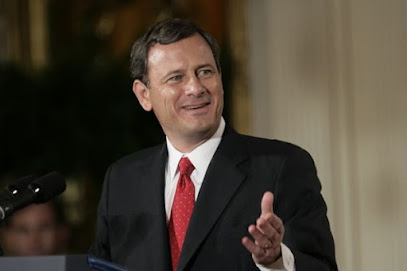 I’m going to try to explain what’s going on in America right now by drawing a connection between two news stories. On the surface, they don’t seem to have much to do with each other, but when you really think about them, it’s obvious that there’s a common thread.

The first story comes from way back in November of 2018, when President Trump complained about an “Obama judge” on the 9th Circuit ruling against his asylum policy. Trump’s comments angered Chief Justice John Roberts, who gave a speech saying:

“We do not have Obama judges or Trump judges, Bush judges or Clinton judges. What we have is an extraordinary group of dedicated judges doing their level best to do equal right to those appearing before them. That independent judiciary is something we should all be thankful for.”

To which Trump responded by tweeting: “Sorry Chief Justice John Roberts, but you do indeed have ‘Obama judges,’ and they have a much different point of view than the people who are charged with the safety of our country....”

For the Deep State and its sympathizers, Robert’s statement was a dignified and erudite defence of the institutions of liberal democracy, while Trump’s tweet was a crass attack on said institutions.

But ordinary Americans, who aren’t emotionally invested in keeping up the illusion that all is well on the banks of the Potomac, saw something different. They saw John Roberts telling a lie, and Donald Trump telling the truth.

Everybody knows that most of what the upper level of the judicial system does is politics by another name. They know that, most of the time, Obama judges, Trump judges, Bush judges, and Clinton judges rule differently on politically charged questions. And a large portion of the American people decide who to vote for in presidential elections based mainly on what kinds of judges they want the next president to appoint.

And yet John Roberts has the audacity to tell these people that none of this is true, and that all judges are really just doing their best to enforce the same laws in an impartial way.

And then, right after this creature of the Deep State (not even a Democrat, but a moderate Republican) has told his lie, Donald Trump does what most politicians won’t do (including Republicans) and tells the truth.

And then, over the next few years, when Trump’s base continues to believe Trump’s statements in preference to those of the media, the regulatory agencies, Anthony Fauci, the “moderates” in Congress, or whoever, the elite classes and the plutocrats and the mainstream press continue to act surprised, as if there is no reason for anybody to take Trump’s word over theirs about illegal immigration, or the origin of the coronavirus, or hydroxochloroquinine, or election fraud.

Now for the second, and more recent, news item, in which we see our self-appointed betters growing impatient with plain lying, and moving on to censorship, as exemplified by YouTube’s decision, about a week ago, to ban all content questioning the efficacy of covid vaccines.

You know who questions the efficacy of covid vaccines? Scientists. Anyone who’s been following the news for the last year or so knows that, while most scientists studying the vaccines believe that their efficacy is well above zero, there have been all sorts of disagreements about how well they actually work: do they prevent serious symptoms 90% of the time or only 70% of the time? Do they work at all against the Delta Variant? Do their effects fade with time? Is a third dose necessary? Will people who already have natural antibodies get any benefit from the vaccines?

All of these questions have been debated by the scientific community, and attentive news-watchers know that there isn’t a settled consensus. Which should surprise nobody, as the vaccines are new, and approved for experimental use only. At this point, it’s good that scientists aren’t all thinking the same thoughts, because that means that at least some of them are doing their jobs.

However, the people who run this country (and, let’s be honest, at this point the government agencies and the big corporations are all run by the same left-leaning plutocrat class) have decided that the Deplorables aren’t allowed to know any of this.

These people know that the Deplorables don’t trust them anymore. So they have to rely on censorship, because they can’t just make their case with logic, and say things like: ‘We all know that the science isn’t fully settled yet, but most of the evidence indicates that the vaccines work most of the time, and your chances of getting harmed by a vaccine are small compared to your chances of getting harmed by the virus, so we’re recommending that you get the shot. But if you don’t, we won’t try to punish you or shame you, because we still believe in liberty.’

That’s the sort of argument that might have worked fifteen years ago. It doesn’t work today, because the Deplorables know that the people saying it have their heads so far up their own rear ends that they either can’t see, or don’t care about, the obvious untruth of statements like “we do not have Obama judges or Trump judges.”

So instead they rely on coercion and censorship. Science takes a backseat to politics, just like it did way back in the spring of 2020, when scientists did a bunch of studies on the efficacy of cloth masks, most of which suggested that they didn’t work, and then dropped the whole topic like a hot rock once it became apparent that most of the people who didn’t want to wear masks were those nasty Trump voters.

So when upper-class liberals are left banging their heads on the wall and saying: ‘Why do these people keep on trusting Donald Trump, even after the events of January 6, and why won’t they believe the FDA when it tells them not to treat Covid with horse-deworming pills, and why are hospitals having to shut down because so many of their employees – medical professionals! – are willing to lose their jobs rather than get the vaccine?’

And the answer is that all this is happening because people notice when the elites lie. They notice when the elites engage in censorship. And they don’t un-notice. Also, once they’ve stopped trusting you, they won’t start again just because you want them to. Instead, they’ll trust somebody else, even if, in your (now-irrelevant) opinion, that somebody else is the worst person in the world for them to trust.