Drafting Women, or How America is Ruled by Moderate Republicans 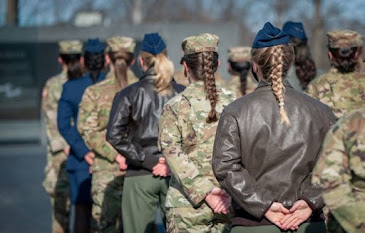 The last few weeks of news in America seem to have been dominated by the consequences of our ruling class’s decision to go all-in with its nihilistic crackdown on unvaccinated essential workers, along with the predictable trail of doubletalk – does anyone really believe that Southwest Airlines’ decision to cancel 28 percent of its flights last weekend was due to weather?

Then there is the woke cultural revolution in the universities, the global supply chain breakdown, the Democrats’ attempts to endlessly relive the events of 6 January through litigation and congressional hearings… I could go on and on.

With all this happening, one can almost be forgiven for overlooking the new version of the National Defence Authorization Act (NDAA) as it quietly works its way through Congress. ‘Almost’ is the key word here, because if the current NDAA passes, then this will be the year that the government finally gets around to making women register for the draft.

Both the full House and a Senate committee have passed preliminary versions of the NDAA that make women eligible for conscription. Now all that remains is for a reconciled bill to be passed through both chambers and sent to President Biden’s desk – something which, if recent patterns hold, will be finished sometime in December.

Support for the measure is quite strong: Democrats are all in favor, and Republicans are split down the middle. For instance, only five out of thirteen Republicans voted against it in the Senate Armed Services Committee.

The list of Republicans in favor of drafting women includes the usual centrists like Liz Cheney, but it also includes people like Tommy Tuberville of Alabama, who won his Senate primary last year by running to the right of Jeff Sessions, and who sided with Donald Trump during the election-certification brouhaha. (Something tells me that Tuberville was never much into sexual equality when it came time to choose football players for the college teams he coached – apparently, there are still some American institutions where results matter more than wokeness, it’s just that the military isn’t one of them.)

So why did I subtitle this piece “How America is Ruled by Moderate Republicans?”

The country does not move left as fast as most Democrats would like (which is why the Left’s activist base feels powerless) but it still moves left.

For one thing, the role of monied interests becomes clearer. Moderate republicans reliably serve as lapdogs to the financial elite, which is why they typically side with Democrats on illegal immigration (corporate America likes cheap labor) and the sexual revolution (the plutocrat class is pro-abortion and pro-LGBT), and also why they are pro-war (wars benefit the arms industry).

On environmental issues, the Democrat/money-Republican alliance is a mixed bag. These people will never tolerate a carbon tax (which would be bad for the lifestyles of the people with private jets) but they will look the other way while the radical Left makes endless use of administrative and judicial activism to harass and hobble the American coal/oil/gas industry. The end result is that nothing actually gets done to reduce fossil fuel consumption, but a lot gets done to make sure that the resulting jobs go to Arab or Russian oilmen instead of to Americans.

Rule by moderate Republicans also explains the direction of constitutional law over the last 52 years. Ever since 1969, GOP appointees have been a majority on the Supreme Court, with the size of that majority fluctuating between five and eight (!) seats. Yet during that time, the federal judiciary has created and defended the right to abortion, consistently supported illegal immigration, and pushed through the LGBT agenda almost singlehandedly – imposing everything from GSAs at high-schools to rewritten sex discrimination laws to same-sex marriage itself at times when each of these developments was still a non-starter with the voters.

For a politically astute conservative, the following names are synonymous with “traitor.” Harry Blackmun, John Paul Stevens, Sandra Day O’Connor, Anthony Kennedy, David Souter, John Roberts. But to whom are they traitors? Not to moderate republicans like Nelson Rockefeller and Bob Packwood and John Sununu, who were instrumental in getting them onto the Supreme Court.

John Roberts is an especially good example of the kind of judge that moderate Republicans like. He started his career firmly on the Right, clerking for William Rehnquist and then working as a staff lawyer in the Reagan administration. But then in the 1990s, with the Republicans out of office, Roberts did pro bono work for gay rights activists. This should have been a red flag – not because the gay rights movement’s goals are always bad, but because its legal strategy, which boils down to ‘use tortuous interpretations of the constitution to exclude ordinary voters from the lawmaking process’ is unprincipled.

This isn’t the only indication Roberts gave that he would end up as a turncoat; there were plenty more. Nonetheless, he managed to win the good graces of America’s ruling moderate republicans by working for the Bush campaign in Bush v. Gore. (This is another thing to remember about moderate Republicans – despite their willingness to advance left-wing policies, they are generally happy to see their fellow Republicans win elections, perhaps because they know that such wins often don’t mean anything in terms of policy!)

Rule by moderate Republicans means that Democratic agendas keep advancing on the backs of Republican electoral victories. Think of the legalization of abortion by Nixon judges, the preservation of abortion rights by Reagan judges, George W. Bush producing No-Child-Left-Behind and Medicare Part D as his signature legislative accomplishments, Donald Trump failing to get his border wall through the RINO congress, or every recent budget showdown ending with a bunch of moderate Republicans peeling off and caving to all of the Democrats’ demands.

Drafting women is only the latest development.

By now, it’s really past time for the Republican base to become less gullible. People like Liz Cheney and Tommy Tuberville need to be held accountable. If you have Republican representatives or senators, call them and let them know what you think about the new NDAA.

If they vote for it anyway, then vote against them in the primaries. Yes, I know that beating an incumbent in the primaries is a long shot, but if there’s going to be a change, that’s where it needs to start. (I am proud to say that the first political campaign I worked on as a young man was an attempt to unseat John McCain).

After all, the alternative to this is just more rule by moderate Republicans.