How the Covid Shutdown Trashed Madagascar 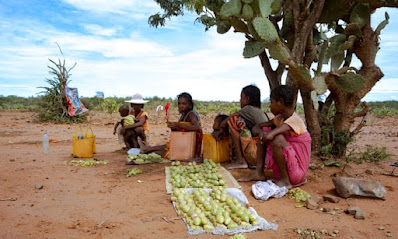 For the upper-class Americans who have made a life out of manufacturing public opinion, the question of whether or not to respond to the Covid pandemic by shutting down most schools, churches, and small businesses for what has now been the better part of two years can be answered with an easy, “Yes, of course.”

The same goes for the comfortable classes of Canada, Australia, Europe, and the other wealthier countries of the world. As these people see it, whether you’re for or against these shutdowns has always been a simple reflection of whether you want more people or fewer people to die of Covid. For the most part, they don’t look at the situation through a lens of cost-benefit analysis.

Which they can afford to do, since they’re part of a social class that pays few of the costs. But for people who are part of the lower classes, or who own or work at one of those millions of small businesses that has gone under so far, the situation looks very different.

Protip: When there are two sides to an argument, and one side wants to compare costs and benefits, while the other side sees it as a simple moral question where the only thing to ask is “do you want people to suffer, or not?” the first side is usually in the right. This goes for single-payer health care, “non-violent policing,” covid lockdowns, and a whole host of other matters where the Left has discarded common sense in favour of ideological purity.

The more reasonable half of the American populace knows that, for most people, going a year or two without steady work is a bigger threat to their well-being than a mild respiratory virus whose average victim is older than the national life expectancy. They know that, among other things, poor people don’t live as long as rich people, and they don’t appreciate being pushed further down the ladder for the sake of the virtue-signalling of managerial-class flacks who work at secure, well-salaried positions in government, academia, medicine, law, or journalism and who have little skin in the game.

Chances are, though, that by now you’ll have heard more than enough about how the United States’ bumbling response to the events of the last few years has left the working poor with the raw end of the deal.

What you’re less likely to hear about is the view from the real bottom – the way that the global shutdown has impacted people in countries like Madagascar. Naturally, the fragile economies of the third world have been hit very hard by the rolling shutdowns of the last two years. And while the global-cosmopolitan chattering class that authored the shutdown doesn’t look on the peasantry of Africa and southeast Asia with the same white-hot hatred that it has shown toward the “Deplorables” in its own corner of the world, it more than makes up for it with straight-up ignorance and indifference.

I have chosen Madagascar as the topic of my article because it makes a good case study; in reality there are dozens of impoverished countries experiencing largely the same things. As for Madagascar itself, its history is a mixed bag: while Madagascar benefits from a lack of serious ethnic and religious violence, a series of coups since it gained independence from France in 1960, and a back-and-forth whiplash between capitalist and socialist political systems, has led to an almost-complete lack of economic development, making it one of the poorest countries in the world today. Madagascar’s main industries are agriculture (vanilla, coffee, sugar), fishing, textiles, and tourism.

When the global shutdowns hit, tourism well-nigh disappeared, and the labour market collapsed among textile-makers and other small businesses. In the northern half of the country, where the year-round rains are good for agriculture, the standard of living (already very low by global standards) took a big blow, but most people muddled through. In the south, which is a desert, it’s different story.

You can read about the situation here and here and here. The poverty in southern Madagascar has gotten so bad that most children are not in school. Some families have taken to selling off their kitchen utensils to get money for a few last scraps of food. Women and children are spending their days wandering along desolate country roads and foraging for the fruit of feral prickly pears. The authorities have estimated that somewhere over a million people are severely malnourished. And so forth.

Because the situation in Madagascar has been exacerbated by a severe drought, most news sources have taken to blaming it entirely on climate change. But the problem is that southern Madagascar was arid to begin with, and never could supply most of its own food needs anyway. The usual way to make a living there has long been to farm in the rainy season, and go into the cities looking for work during the dry season.

But now, with most businesses shut down, people don’t have that option. So they’ve ended up opting for desperate measures like spending their days gathering brushwood onto carts and trying to sell it to other people who are usually as poor as themselves. Or taking all their kids out of school and sending them on long treks into the parched wilderness in search of prickly pears.

The upshot is that while Covid remains a minor concern in Madagascar – fewer than a thousand people have died of it so far out of a population of 28 million – medical teams are now prowling the country to diagnose malnourishment by measuring the upper arms of small children. “Use of the MUAC bracelet is standard practice for a malnutrition screening,” a news article explains, “when the tape shows green, that means the child is doing well.”

This what its like to be on the bottom when the people in the global-cosmopolitan ruling class have their way. These affluent liberals love to pretend that the issue they’re focused on at the moment (slowing down covid transmission by any means necessary) is the only issue that matters, to neglect practical cost-benefit analysis in favor of moral preening, and to do their best to ignore the consequences in the lives of people less well-off than themselves. And when the consequences can’t be ignored anymore, they blame them on something like climate change instead of their own policies.

People need to wake up to what is going on. Whether it’s the plight of small business owners and wage-laborers here in America, or the even deeper struggles with poverty which the people of Madagascar are facing half a world away, the basic theme is the same: the lockdowns have gone on too long, and the decision-makers of society need to wake up and realize that there are things other than viruses that can make life worse for those less fortunate than themselves.