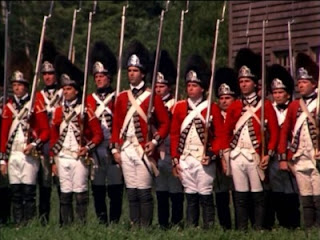 I have been back in the United States for a few weeks now,  though until today I was too distracted by other concerns to update my blog – one of those ‘other concerns’ being, of course, the celebration of Independence Day. For my family, these celebrations consisted of reading the Declaration of Independence while standing in front of a Bennington Flag, setting off a few fireworks, and watching the movie April Morning.

April Morning, based on the Howard Fast novel of the same name, is a 1988, made-for-TV Hallmark movie starring Tommy Lee Jones and Chad Lowe. Despite its obscure origins, it usually scores earns a fairly high spot on internet rankings of Revolutionary War movies, which is how I ended up choosing it.

The first few scenes introduce the time period – we are in Spring of 1775, when the “Committees of Correspondence” that had sprung up all over colonial America during the foregoing years are moving beyond the petition-writing and peaceful demonstrations of earlier years, and are beginning to weapon up.

Then we get introduced to the leading characters. Adam Cooper (Chad Lowe) is a 15-year-old boy growing up in Lexington, Massachusetts. He is a lazy and indisciplined youth, and his father Moses Cooper (Tommy Lee Jones) is constantly berating him and complaining that, though he has the height and age to be called a man, he doesn’t act like one. (Though it’s also clear that Moses never really treats Adam in a way that would make his son want to respect him).

Adam has a girlfriend (apparently won over by his looks?) and both she and his mother and grandmother are more open about expressing their affection for Adam, though they all do wish he would change his ways. (Yes, it is kitschy and clichéd. This is a Hallmark movie, after all.)

Finally, on 18 April, 1775 (the eve of the first battle of the Revolutionary War, though nobody knows this yet) Moses Cooper yields to his wife’s pleas to start treating his son like somebody he loves and trusts – though to her consternation, he achieves this by enrolling him in the Lexington militia. A little later, Paul Revere rides into town, shouts out his hurried warning that ‘the Regulars are coming,’ and disappears into the night, leaving Lexington’s little militia company to nervously deliberate how they’ll respond to the news.

As the sun rises, we see the militia assembled on the Lexington village green. Following proper Puritan discipline, they sing a hymn. In due time, the redcoats appear, a long marching column on its way from Boston to Concord to seize the powder and shot that is stockpiled there.

The (badly outnumbered) Lexington militia is ordered to disperse. It doesn’t. The regulars fix bayonets and march against the militia. The shooting begins. After a single volley; what’s left of the militia has broken and fled. Eight colonists, including our hero’s father, lay dead on the ground. The column marches on to Concord.

I won’t give away more details of the plot. Suffice it to say that the events of the rest of the day follow the historical record: the Regulars can win in a pitched battle, but they lose against the ambush warfare of little bands of militia hiding in thickets and behind stone walls. It is just as in Longfellows’ poem:

You know the rest; in the books you have read,
How the British Regulars fired and fled,
How the farmers gave them ball for ball,
From behind each fence and farmyard wall,
Chasing the redcoats down the lane,
Then crossing the fields to emerge again,
Under the trees at the turn of the road,
And only pausing to fire and load...

The film closes at around nightfall. If there can be said to be a ‘lesson’ or ‘moral’ to April Morning, it can best be summed up as: ‘This is how it all began.’ Before there was the Continental Army or the Declaration of Independence or the American Flag or General George Washington or the White House or The Star Spangled Banner or any of the other symbols that make people think ‘America,’ there was a little band of minutemen on the green at Lexington, facing down a larger force of government troops and standing their ground.

The minutemen knew that they were the weaker party. They knew that if the Regulars fired on them, the battle – in that moment – would go to the enemy. Each man knew that if he fell to a British musketball, his wife and children would have to lead a harder, lonelier life in his absence.

But these men also suspected that, across the thirteen colonies, there were hundreds of other towns that felt the same way as they did about British rule and whose inhabitants, once battle was joined, would fight on their side. And they knew that if they didn’t fight – if they yielded and submitted – then all their committee-of-correspondence work and petition-writing and eloquent speechifying about the Rights of Man wouldn’t mean anything.

And so, even though they disliked violence (it takes quite a while, later on, for the boy Adam Cooper to work up the guts to kill a man) and would much rather have been let alone to enjoy their rights in peace, they made up their minds to preserve their liberties and their way of life by force of arms if that’s what it took.

The historical accuracy of the film is, on the whole, quite praiseworthy. We see that, while there are a few rabble-rousers among the people in Lexington, most of the colonists start off as just ordinary working men and women, concerned with humdrum and private affairs unrelated to the war that is brewing up around them.

Although the film’s rural setting spared its creators the difficulty of constructing a convincing set of (say) Colonial Boston, they did see to it that the various kinds of British troops – grenadiers, battalion, and light infantry – are all uniformed accurately. Soldiers on both sides follow the kind of tactics that make sense when one’s weapons are a bayonet and a single-shot, blackpowder musket that takes about a minute to reload. And so forth.

The characters generally avoid anachronistically talking up twentieth-century ideas. At the same time, we get an honest portrayal of the behind-the-scenes conflict between the old faith in the Puritan variety of Christianity that had burned so brightly with the Pilgrim Fathers, and the rising tide of rationalism in which a man, while still acknowledging his Creator, is free to believe that God is often indifferent to human concerns, or that Holy Writ can’t be relied upon to supply the final answer to every question that might trouble him.

While the British characters are walk-ons, you still get a (correct) impression that most of them are honest, Christian men who simply believe in law and order more than they believe in the ‘rights’ that the colonists are claiming to have. In other words, they are not the bloodthirsty thugs seen in the Mel Gibson slaughterfest that unfortunately still dominates how all too many moviegoers think about the War of Independence.

One of April Morning’s few weaknesses, in my opinion, is that it makes a big deal out of a specific character firing ‘the shot heard round the world’ instead of leaving the question of who fired first as a mystery, the way it is in the actual historical record.

Notwithstanding such trifles, April Morning is, on the whole, a movie that I highly recommend. Next time the Fourth of July comes around – or the anniversary of the Battle of Lexington itself, or even just some night when you want to watch a movie and don’t already have one picked out – watch this film, and show it to your children.

The movie really does an excellent job showing what the American Revolution was all about. It is a story of solidarity – a story of knowing that, on your own, you’re too weak to take on your enemies, but deciding to fight anyway because you feel a sense of brotherhood with your comrades and you know that only by sticking together do you have any chance at all.

It’s a story of courage – a story of choosing defiance over fear. It’s a story of not caring that your enemies nominally have the law on their side, because the only laws you recognize are laws that, in your own judgment, conform to your people’s traditional notions about the rights that a government has got to respect whether it wants to or not.

And it is a story of recognizing that, while the defense of one’s liberties will usually begin with cool-headed discussions and petition-writing and voting and the like, there will often come a time when such acts will be shown to mean nothing unless a critical number of patriots are willing to shed their blood rather than submit to tyranny.

And these are lessons that the current generation of Americans would do well to take to heart.