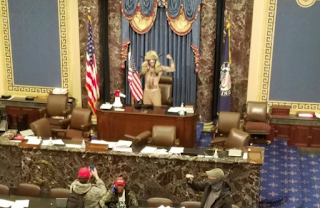 My original plan for the first post of 2021 was to review my New Year’s predictions from last January, discuss how the trends I was anticipating back then had played out (or failed to play out) in the real world, and make a new set of predictions for the coming year.

I was aware that some Republican Senators and Congressmen had caused a kerfuffle by threatening to raise objections during the 6 Jan counting of the electoral votes. I didn’t expect much to come of it, though I at least found the prospect interesting enough to turn on the C-Span feed from the Capitol yesterday morning to watch the show, and then feel rather annoyed when my own Congressman, Paul Gosar, made the first formal objection. (I have been saying since November that refusing to admit Biden’s win at this point is idiotic).

Then I found out that, after each objection was registered, the two Houses of Congress would have to go into separate chambers, debate it, vote on it, and then repeat the process four or five or six times for however many other states were disputed. The whole thing seemed immensely boring, so I turned off the feed.

An hour or two later I checked the news and, lo and behold, a mob of Trumpist rioters, encouraged by the President’s calls to “never concede,” had smashed their way into the Capitol, looted the place, immortalized their hooliganism with photo ops like the one at the top of my post, gotten themselves tear gassed, and finally dispersed after several hours of fighting during which four people were killed.

Because, contra the insistence of the mainstream media and the Neocons, the utter failure of the Electoral Count Riot to overturn the electoral count is not a heartwarming example of a well-functioning democratic government resisting an assault by a bunch of fanatics who want to bring it down. Rather, it is the sort of thing that only happens when a lot of people have already lost faith in American democracy.

If you have followed my blog for a while, you’ll know that I’m not in the “keep-it-strictly-legal” camp when it comes to resisting the Left. I’ve said before that the Right’s failure to resist the Left more forcefully in the past has led to America becoming much less democratic than it was a century ago. I have said that some of the Supreme Court’s abuses of power in the 1960s and 1970s deserved to be met with general strikes and barricades in the streets. And I have pointed to the numerous American parents entangled in transgender child custody cases, and their failure to flee the country and seek asylum in Russia, the Philippines, or some other likeminded place, as a sign of inexcusable cowardice on the part of the American Right.

Still, what happened yesterday was idiotic, self-defeating, and immoral.

There is no need to explain in great detail why our messy political situation will not be improved by the spectacle of one party’s fanatics breaking into the Capitol in a hairbrained attempt to prevent their own Senators and Vice President from certifying a member of the other party as the winner of an election which he actually won.

Even so, it’s a mistake to characterize the riot as an attack on a properly functioning set of democratic institutions.

Which is not to say that the country would be better off if the riot had succeeded. In the event that Trump had actually proven himself competent enough to stage a real coup and become dictator-for-life, then it would be naïve for me not to admit that our constitution was dead and buried. But just as there is more than one way to skin a cat, there is more than one way to subvert a republic.

In our current system, as I have lamented many times, the role of the voters in the political process is mostly perfunctory. What really happens is that, while the electorate gets a chance to swap out the President and the Congressional majorities every two or four years, America’s true rulers in the courts, civil service, universities, and woke corporate boardrooms just keep on advancing the same neoliberal agenda – an agenda which presently includes open borders, economic globalization, racial hatemongering, harassment of domestic industry and small businesses, and government-promoted sexual deviancy of every sort.

A large number of Americans are very bothered by these things. And they have come to realize that most Republican politicians simply don’t care. These issues get talked about during elections, but once in office, each new crop of Republicans does little or nothing to stop the courts, the civil service, and various corporations from carrying on policies which their base hates. Which is why such a big portion of the Republican base has come to loathe the Republican party.

Or in other words, America’s so-called “democratic institutions,” by deciding not to be democratic anymore, have lost the trust of America’s voters. And when people feel cheated, ignored, or betrayed, they tend to become angry and irrational.

Thus, while these abuses of power don’t excuse what the MAGA mob did (Biden, after all, really did win the November election) they do go a long ways toward explaining why the mob did it.

For example, CNN (along with the rest of the mainstream media) has done a lot to lose the trust of middle Americans. But these former CNN viewers have not, for the most part, gone over to something better than CNN. Rather, all too many of them have turned to Newsmax, InfoWars, the Unz Review, or something else along those lines.

We saw something similar, but quite a bit more momentous, back in the 1960s, when the youth counterculture was feeding off of the (real) hypocrisy of many of America’s traditional authority figures regarding segregation and the Vietnam War. But the “never trust anyone over thirty” attitude didn’t make the rising generation better than their (flawed) parents, it made them worse.

Right now, the story is playing out all over again with the Trumpist Right. Having lost faith in America’s governing institutions (which only care about democracy as a façade for their institutional power) they have placed their faith in Donald Trump (who only cares about democracy when he wins).

There are plenty of reasons why Donald Trump is a flawed vessel for these people’s faith.

To begin with, Trump’s record on following through on his campaign rhetoric isn’t that much better than the typical Republican’s. Trump ran on a platform of ending foreign wars, but once in office, he kept on bombing Syria, vetoed an Act of Congress that would have gotten the US out of Yemen, and nearly started a war with Iran by assassinating Qasem Soleimani. Trump did not fulfil his promises to repeal Obamacare, defund Planned Parenthood, or build a border wall. He appointed the Kennedy-clerk and likely centrist Brett Kavanaugh to the Supreme Court. And so forth.

Which he is doing, by leading the bulk of his party into a fantasy-land where he is the true winner of last November’s election.

Even before yesterday’s riot, Trump’s blitheringly stupid behaviour had already cost the Republicans their Senate majority. Georgia’s two Senate races on 5 Jan should have been easy wins for the GOP, since the losing party in a presidential election tends to win almost all special elections during the next two years. (i.e. the losing party’s voters, who feel spurned and disempowered, have a much higher turnout rate than the contented voters of the new President’s party.)

Of course, Trump’s refusal to admit that he lost scuppered that process, since it gave Democratic voters good reason to feel that Trump was still a live threat to their rights and liberties, leading them to turn out in record numbers and flip the Senate.

The difference between those events and what Trump is doing now is that earlier flights of fancy simply ended in runs-to-the-left, i.e. Democratic policies being advanced on the backs of Republican electoral victories. Trump’s flight of fancy ended in full Democratic control of the government, plus a batshit crazy riot which has given a great many political moderates good reason to hate and fear the Republican Party.

The Electoral Count Riot didn’t happen in a vacuum, and it deserves a better explanation than “Trump is a Mussolini wanabe,” or “Republicans are awful.” The riot happened, in large part, because America’s governing institutions have lost the trust of the Deplorables. But the person and ideology which a great many of those Deplorables have chosen to trust in their place do not offer us a realistic path back to normalcy.

So if you are upset about the things that the lunatic Left and the plutocratic Center are doing to this country, then I have bad news for you: we cannot expect the Trumpist Right to offer effective resistance.

The only solution I can offer now – if it’s even worthy of the name – is to prepare yourself and your family to live in a country that looks like Russia in the 1990s or present-day Mexico, because that is where we are headed.