Following The President Wherever He Goes 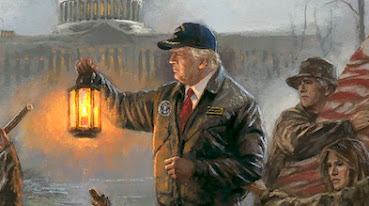 My most recent Twilight Patriot entry has earned a rather unusual distinction. If you go to Google and type (with quotation marks) “A cowardly moron could have wrote this article,” complete with the bad grammar, then you will get exactly one result: Intellectual Conservative’s copy of my post from the week after the election.

Obviously, the quotation isn’t from the text of the article – it’s from the top-rated comment in the comments section. And how did I go about convincing my audience that I was a “cowardly moron?” Why, by saying that Joe Biden had won the election, and that Donald Trump was making a fool of himself by insisting otherwise.

Notice that I did not say the election was free of fraud. (There has never been an election that was completely free of fraud). What I said was that Biden’s margins are big enough that for Trump to change the outcome by proving in court that a sufficient number of Democratic votes are fraudulent – and to do that in at least three states – is not realistically possible. Conclusion: Joe Biden is going to be the next President.

But for a certain faction of the American Right, saying this out loud makes me a “cowardly moron.” Perhaps these are the same people who are threatening to boycott Georgia’s upcoming double senate election in order to punish the GOP for stabbing Trump in the back? (FYI, the outcome of those races is going to decide whether Chuck Schumer or Mitch McConnell will be the man who decides how much of the Biden agenda gets through Congress.)

But for too many people on the Right, politics isn’t about making a level-headed appraisal of reality, and then deciding how to act on it. Rather, their modus operandi is to borrow that line from the New Testament about how the elect will “follow the Lamb whithersoever he goeth,” but with the populist leader du jour taking the place of Jesus.

This attitude is downright cultish, and as long as the Republican Party falls for it, Democrats and skeptical moderates alike will have every right to say that Republicans are blowing smoke whenever they claim to be the party of individual liberty and checks and balances and full-grown men and women who can think their own thoughts.

Nothing good can come from the Republicans’ refusal to be realistic about the role that the President is supposed to have in our system of government. He is not America’s CEO. He was not chosen to ‘run the country,’ or even to run his own party. He is one elected official among many. If he tries to lead his party on a flight from reality, then that party’s other elected officials ought to have the courage to say no.

Except that they don’t. When George Bush Jr. said that Saddam Hussein was building nuclear weapons and that invading and occupying Iraq would be a step on the way toward filling the Middle East with flourishing liberal democracies, only one Republican Senator and six Representatives had the courage to say no to his war. Meanwhile most Republicans, especially in the media, kept on defending Bush’s alternate reality years after events had stubbornly refused to accommodate themselves to the narrative.

This wasn’t even the first flight from reality on which Bush had led his party. Back in 2001, he and John Boehner crafted the No Child Left Behind Act on the premise that an elaborate system of federal bureaucratic controls would fix America’s school system – basically, he decided to start peddling an idea that was the exact, reverse opposite of the ideas on which small-government conservatives always run for office.

Now let’s go back in time a little further, to when the elder President Bush said that David Souter, if confirmed to the Supreme Court, would be a great conservative judge. Bush had no real reason for believing this, because, in order to avoid a confirmation fight a la Robert Bork, he had intentionally picked a nominee with no record from which anyone might guess at his judicial philosophy.

But even though a lot of Republicans had doubts about Souter’s ideology, none of them had the courage to say no to a Republican President. The result was the near-unanimous confirmation of a leftist Supreme Court justice.

Ronald Reagan did pretty-much the same thing with Sandra Day O’Connor. Actually, what Reagan did was quite a bit worse, because (1) his party had a majority in the Senate at the time, and he could have gotten anybody confirmed, and (2) unlike Souter, whose record was a complete blank, O’Connor had a history of supporting leftist causes, which Reagan had to strain to overlook. The grousing from people like Phyllis Schlafly and Jesse Helms is evidence that movement conservatives knew that they were dealing with a slippery nominee. But at the end of the day, every Senator proved willing to follow Reagan into his fantasy land, and O’Connor was confirmed unanimously.

And this isn’t just a matter of playing follow-the-leader with the President. For far too long, the American Right has embraced an ethos in which loyalty consists of adhering to the narrative even when the narrative doesn’t adhere to the facts. You can see it in the rose-colored glasses through which Republicans view their Presidents; you can also see it in the way that so many otherwise intelligent Republicans are all-in for young-eartherism and climate change denial. Why? Because when holding an irrational belief becomes a marker of tribal affiliation, beliefs stop being checked to see if they fit the evidence.

And then it becomes way too easy to believe ridiculous things – for example, that it is a good idea to refuse to vote in the Georgia Senate runoffs in order to “punish” the GOP for its failure to keep Trump in office after his loss in the 2020 election.

Donald Trump is not the Republican Party’s commanding officer. He isn’t its sole owner and proprietor, or even its CEO. Nor is he the divinely anointed end-times servant that the people at Liberty University want him to be, or the whitehat anti-puppetmaster extraordinaire that the dorks who follow QAnon insist he is. And Trump isn’t even the most powerful Republican politician right now (that would be Mitch McConnell).

From today until noon on 20 January, Donald Trump is just a citizen who happens to hold an important office.

And it’s the job of other well-meaning American citizens, whether their role in public life is large or small, to be candid about the President’s shortcomings, oppose his flights of fancy when they think there is a good reason to do so, and otherwise behave like citizens of a republic rather than deluded sycophants in a personality cult.