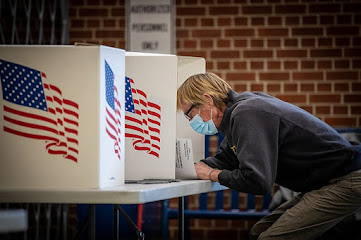 One of the consequences of having had a presidential election six days ago is that people in the news are talking about politics slightly more than usual. (Circumstances being what they are, “slightly more than usual” is the only intensifier that makes any sense). I already wrote last week about how I don’t expect Biden’s win to have much practical benefit for Democrats – without the Senate, they can’t enact their agenda, and since the President’s party tends to do badly in midterm elections, there’s no reason to expect them to regain the Senate.

That being said, here are some other things I have noticed over the last few days.

President Trump probably went to bed on Tuesday thinking that he was going to win and then woke up the next morning to realize that he wasn’t in the lead anymore. So did a lot of Republicans, including myself. It was a big disappointment.

Honestly, though, I wouldn’t have guessed that almost a week later he would still be holed up in the White House, munching on an endless train of fast food and attended by only the most sycophantic members of his staff, as he carried on tweeting things like “STOP THE COUNT!” and “I WON BY A LOT!”

One might be forgiven for thinking that the President has stepped into the role of the evil overlord in a children’s cartoon who spends the final minute or two of the episode pointing to his defeated army and shouting “No! This cannot be! I am invincible!”

Needless to say, I don’t exactly regard it as beneficial to the Republican cause that Trump has decided to handle his loss this way.

As for the possibility of Trump reversing the outcome through litigation like he was already threatening to do several weeks before the election? It’s a pipe dream. There is nobody serious who sees a potential repeat of 2000. To begin with, George W. Bush was ahead after the first count of the Florida ballots, and to win, he only needed to get the courts to halt the recounts, which he managed to do after a month of lawsuits. Also, the whole election hinged on just one state – if Bush won Florida, then he would become the next President.

Trump, on the other hand, will have to flip three or four states in order to come out on top in 2020. And he will have to flip states where Biden won on the first count, by much bigger margins than the 537 votes (.009 percent of the total) that were at issue twenty years ago. There is a big gap between suspicion of fraud – of which there is plenty – and evidence strong enough to get the courts to disqualify two or three percent of the Democratic ballots in multiple states. The latter is not going to happen.

Honestly, we would all be better off if Trump conceded defeat and then spent the next two months nominating judges, issuing pardons, and doing whatever else an outgoing President usually does during his final days in office. His present course of action just makes him look like a jackass.

2.     We Can Expect More Covid Relief When Spring Comes

Perhaps you remember how, at the end this summer (though it feels like a year ago) Republicans and Democrats talked about how they were going to pass a second Covid relief bill with another round of $1,200 checks for every American, plus other useful spending? Well, they didn’t pass it.

The reason is that the first bill, from back in March, gave people on unemployment insurance an extra $600/month beyond what they were already getting, and beyond the $1,200 one-time payment that went to everybody. The bill was passed in such a hurry that nobody had much time to debate the merits of this provision, but in the second bill, the Republican Senate decided not to reauthorize it.

After all, the Republicans said, people on unemployment insurance are already being paid money to make up for their lack of a job, so why should they get extra money, when so many people who aren’t on unemployment insurance but are still struggling – such as those who only had part time work, or who owned floundering small business – didn’t get anything along the same lines?

Democrats wouldn’t budge. Faced with the choice between $1,200 checks for everyone and ordinary unemployment benefits for the unemployed, versus no relief at all, they went for no relief at all, and went home shouting at the tops of their lungs about how Republicans hate the poor.

They could do that because Donald Trump was the President, and so it was his party, not theirs, that would be held accountable by the electorate for whatever happened. (One of the consequences of having a profoundly ignorant electorate is that it is nearly always in the opposition party’s interests to behave as obstructively as possible).

With Biden as President, the situation will be reversed. The Democrats will now benefit from trying to minimize economic hardship and get America back to normalcy as fast as they can. And most Senate Republicans have enough genuine love of their country to make a serious attempt to work with them.

Also, Mitch McConnell and Joe Biden, despite belonging to opposite parties, have a history of personal friendship. I am genuinely curious to see how far this friendship can get them.

3.     The Georgia Runoffs Are A Complete Mystery

When I wrote my last post, I said that Republicans would end up with 52 or 53 seats in the new Senate (53 turned out to be too optimistic, as Michigan was soon called for the Democrat). At the time, I wasn’t paying any attention to the Georgia runoffs; I had assumed that since Georgia was such a red state, the Republicans would easily win both races in this rare double-special-election.

As it turned out, Georgia this year made a surprise break for Biden. Neither Senate election produced a majority, so one Republican and one Democrat will contest each of them on 5 January. Naturally, Democrats are excited about their chance to get from 48 to 50 Senate seats after all.

There is a simple rule for predicting the outcomes of special elections, and it goes like this: The President’s party gets smashed. Just ask yourself why the Republicans won in Massachusetts in 2010 or the Democrats won in Alabama in 2017. It’s only possible because turnout is very low except among the people who feel like their party is the underdog and that it desperately needs to win in order to resist the tyranny of the incumbent President.

It has been like this for at least three decades. The only special Senate elections in which the candidate from the President’s party doesn’t get beaten are the ones where an especially strong candidate is running on his party’s home turf, like when Cory Booker won in New Jersey in 2013. Even then, the margins are still smaller than usual.

So if there is such a simple rule to predict special elections, then why am I admitting complete cluelessness about Georgia?

The answer is that at this point, it is impossible to say which party is the President’s party. From a technical standpoint, it will obviously be the Republicans, as Biden won’t be sworn in until 20 January. But will the Democrats still feel like they need to turn out en masse to resist Trump, or will they act like he’s already beaten and let those seats slip away? And will the Republicans turn out en masse to resist Biden?

There are no examples from recent history of a special Senate election held during a transition, so I can’t answer those questions on the basis of experience. Speculation is all we have to go by.

Though if, by the time those elections roll around, Trump still hasn’t admitted that he lost, then the Democrats will be in a stronger position.