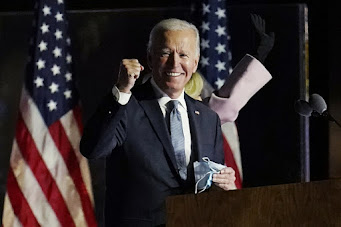 I am writing this on the evening after election day. Most of the votes have been counted, and only four states remain uncalled: Georgia, North Carolina, and Pennsylvania, which lean Trump, and Nevada, which leans Biden. But unless Trump wins all four of those states, which at this point is very unlikely, then Biden is going to be the next President – right now I will be so bold as to call it a 95 percent certainty.

Contra all the pundits and pollsters who foresaw a Democratic blowout, this election has ended up as a squeaker, just like the last one. At the beginning of the year, I predicted that Joe Biden would win the primaries, and Trump would win in the general election. Once Trump started bungling this year’s spate of crisis events, I admitted there was a chance he could lose, a la Carter in 1980 – the only other President of the last 120 years to lose re-election when his party had only been in the White House for four years.

But there is a big caveat for the Democrats: by winning the White House while leaving the Republicans with a 52 or 53 seat majority in the Senate, Joe Biden may well have achieved the most useless presidential victory in modern politics.

This victory comes at the end of a long, long struggle. Back in the 1960s, when Biden was still cheating his way through law school, he decided that he wanted to become a Senator when he was 30 (the minimum age) and then become President as soon after that as he could. True to his aspirations, Biden won Delaware’s 1972 Senate election at the age of 29 (he turned 30 before inauguration day). But his first two bids for the Presidency – in 1988 and 2008 – didn’t even make it into the primary season, though the latter at least netted him eight years of the vice-presidency as a consolation prize.

Biden didn’t give up, and now, at age 78, he is set to become America’s oldest president on the day he takes the oath of office. To get an idea of how long he has had to bide his time, just think about the fact that when former presidents Clinton, Bush Jr., Obama, and Trump attend his inauguration, they will all be younger than the man being sworn in.

Well, the guy has certainly got persistence.

But that raises an unpleasant question: Now that Biden has (sort of) achieved his personal goal – becoming President at as young of an age as possible – what is in it for his party?

The answer is: surprisingly little.

Had the Democrats picked Bernie Sanders or, really, anyone other than the most dull and uninspiring candidate to run in the primaries, they might have gotten themselves a leader with actual energy and charisma, arriving in Washington with a handful of new Senators and Representatives on his coat-tails.

Instead, they got an old, senile President who can barely stay awake, and only 47 or 48 Senate seats. Which leaves them in a very weak position.

Over the last few months, Democrats have filled the airwaves and the internet with talk about Medicare for All and student loan forgiveness and climate legislation and free college and repealing the Hyde Amendment and (as of 18 September) adding seats to the Supreme Court. Without a Senate majority, none of that is going to happen.

If Trump had won, the Democrats would have been shut out of power for the time being, but they would also have picked up a bevy of House and Senate seats in the 2022 elections (as a general rule, the incumbent President’s party gets clobbered in the sixth-year midterms). But with Biden nominally in charge and no bright orange hate object to inspire Democratic turnout, you can expect the Democrats to gain little or nothing in the upcoming midterms. From the standpoint of legislative potential, the Biden win was a Pyrrhic victory if there ever was such a thing.

Luckily for the Democrats, it has been nearly a century since America’s elected legislature played a leading role in making policy – in the modern system, that is usually a job for the civil service and the courts.

Biden can’t do much with the courts. All of his judicial appointments will have to go through a Republican Senate; for all we know, he might not even be able to provide a younger replacement for Stephen Breyer, the Supreme Court’s oldest liberal, in the event that Breyer wants to retire. Expect the current balance of three conservatives, three centrists, and three liberals to remain unchanged.

That leaves the civil service. Biden and Harris will certainly do their best to put leftists in all the key positions in the executive branch, within limits (i.e. as long as the GOP controls the Senate, nobody who’s spent the last four years talking about “whiteness” will get to head up a cabinet agency). Nevertheless, under Biden-Harris, we can expect  there to be more illegal immigration and more public celebrations of  deviant sexuality and more discrimination lawsuits filed against religious schools and businesses.

Well, slightly more. Even under Trump, most of the people who worked for the government were leftists (they’re called the “permanent civil service,” they don’t get replaced when the party in power changes, and they outnumber political appointees by more than one hundred to one). This is why so many government agencies, even under Trump, have spent the last year promoting wokeness, equity, antiracism, etc. And they will keep doing it under Biden-Harris.

Expect to see more local governments sponsoring events along the lines of Drag Queen Story Hour. Expect to see more people getting fired from their jobs for holding the wrong political opinions, especially if they work in academia, medicine, or white-collar corporate management. These firings will be blamed on Biden, but they would have happened anyway under Trump; I know this because they are already happening under Trump. Ditto with parents losing custody of their children for not affirming gender transitions.

The Supreme Court with its new Trump justices will do a good job of quashing overt censorship, but very little of what the Left is doing, or is planning to do, consists of overt censorship.

Getting banned by Youtube without an explanation or a chance to appeal? It’s well within Youtube’s legal rights. Getting fired from your job at a woke corporation because something you said several years ago has resurfaced on the internet and has been deemed racist or homophobic by the leftist mob? As before, it is within the corporation’s rights.

Ironically, the absence of Trump as a hate object on whom the Democrats can focus their rage will probably lead to a decrease in rioting and politically-motivated disowning of friends and family. Enjoy it while it lasts, because the major trends are still the same.

Neither Trump nor Biden has power over the media, the universities, or the major corporations. These are the institutions which together determine the long-term evolution of American public opinion. Ten years from now, this country will have less freedom of speech, less freedom of the press, and less freedom of religion than it has now.

You had better count on it. Without control of the Supreme Court, the Left can’t simply order us all to give up those freedoms, but high-tech mobs and woke corporations can still harass and censor and boycott their way to the same results.

I started off my post by calling Joe Biden’s win “useless” because it adds nothing to the Democrats' ability to get their agenda through Congress, while a Trump win would have detracted very little from their ability to impose that agenda on the American people by other means. But winning can mean different things to different people.

For Biden, winning meant seizing the Presidency at the youngest possible age. Biden won – sort of. For populist and idealistic Democrats, it means passing sweeping reforms in the Houses of Congress. The results of yesterday's Senate elections guarantee that these people aren’t going to win.

For the plutocratic oligarchy – the people who control the major corporations, the media, the Ivy League schools, and the permanent civil service – winning means maintaining the status quo, lining their own pockets, and keeping the country moving steadily leftward, except on issues like income inequality or environmentalism where leftward movement would interfere with their wealth. These people always win. Their power structure is designed so that populist movements like Trumpism – and Nixonism and Reaganism before it – roll off of it like water off a duck’s back.

But for each American who may be reading this, the most important question should be: how can I win?

The purpose of my blog has always been to wake people up to the broader patterns of civilizational decline that are going on around them, and help them to see that most of the milestones in America’s journey from constitutional republic to post-constitutional empire are by now in the past.

Many of my readers have criticized me for my pessimism, but I don’t consider my own predictions pessimistic. Decline and fall is the unavoidable fate of empires, ours as well as the Roman or Spanish or British empires before us. Pointing out that a nation is mortal – that, like everything on earth, it is subject to decay and its days are numbered – is not the same as saying that the nation was conceived in rottenness or that the people within it have no future.

Winning involves refusing to live in the same way as the American majority, it means being careful about how your children are educated so that they grow up holding your values instead of somebody else’s, and it means learning to work with your hands and adopting a frugal lifestyle in the expectation that the economic arrangements that privilege the United States over the rest of the world won’t be around forever. I have written before on the topic of living prudently in an age of decline; you can read some of my thoughts here.

And the reward, if you’re successful, is that you, or your children, or your children’s children, get to help build the next civilization on this continent, once the present one has finished crumbling. And if you ask me, that’s a much better prize than the one that Joe Biden just won for himself, when he committed to spend the next four years trying to stay awake long enough to pretend to be leading America.