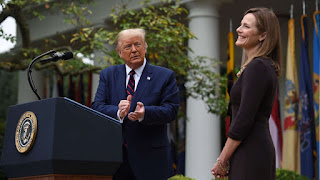 Yesterday, President Trump announced his nomination of Amy Coney Barrett to fill the Supreme Court seat that has been open since Ruth Bader Ginsburg’s death last week. As this is a major plot twist in what is already a bizarre year in American politics, nearly every news site in the country is buzzing with commentary. Hence my desire to add my own brief observations on Barrett’s nomination.

Back in 2016, when Antonin Scalia died and Mitch McConnell announced that the Republican Senate wouldn’t be considering Obama’s nomination of Merrick Garland to replace him, he justified it on the grounds that Supreme Court vacancies shouldn’t be filled during election years. Everybody with half a brain suspected that the “McConnel Rule” wouldn’t last thirty minutes beyond the moment that a Republican president got a vacancy during an election year.

My own prediction, at the time, was that the new precedent that McConnel & Co. were actually setting was that no justice should ever be confirmed under divided government.

Well, if Trump wins re-election but then loses the Senate in 2022 (as presidents in their sixth years usually do) I will not be holding my breath and waiting for the Democrats to vote on any of his Supreme Court nominations – or perhaps on any judicial nominations at all – during his final two years in office.

I am on the record criticizing President Trump for not picking a woman for his last Supreme Court vacancy in the summer of 2018. Simply put, the absence of any female conservatives from the Court makes it more likely for wishy-washy justices like John Roberts to vote with the Left to avoid ending up on the wrong side of a perceived battle-of-the-sexes. Well, Trump didn’t make that mistake this time around.

And that’s not even the beginning of the good things that there are to say about Amy Coney Barrett. As a law professor at Notre Dame, she’s racked up a record of promoting originalism far superior to what Kavanaugh or even Gorsuch had. She is deeply religious and has seven (!) children, which is exactly the sort of countercultural thing that signals that a person fully embraces old-fashioned values rather than merely flirting with them from time to time. (Antonin Scalia, for that matter, had nine children.)

3.     The Democrats Will Have To Be More Creative Than Last Time

Back in 1987, Democrats could attack Robert Bork on ideological grounds because they had a majority in the Senate. In 2018, when Brett Kavanaugh went before a Republican Senate, the Democrats had to try something different. So they got a woman who had known Kavanaugh as a teenager to come forward and make thin-as-vapor rape allegations, and then get all hysterical about how hurtful it was when Kavanaugh insisted that the senators shouldn’t believe her.

But with a female nominee, that particular line of attack will be a lot harder. It is remotely possible that the Democrats will try to derail Barrett’s nomination by finding somebody to claim that, early in her career, she had sex with an underage boy. But what is more likely is that they will just try to paint her as a dangerous religious fanatic.

Barrett is a Roman Catholic, but she also belongs to an interchurch charismatic association called People of Praise. Its members believe in the gifts of prophecy and healing, and they commit to live by traditional gender roles. (You can tell that it isn’t too traditional by the fact that it has room for a woman who chose a career as an appellate judge).

But you can expect leftists to get apoplectic over People of Praise anyway, especially since the association used to call its female officers “handmaids.” If you are biblically literate, then you will be familiar with the passage in Luke 1 that inspired this choice of title:

And Mary said, Behold the handmaid of the Lord; be it unto me according to thy word.

Nevertheless, most Americans aren’t biblically literate these days, and the fact that religious men and women often use the language of servitude in describing their relationship with God isn’t taken for the mundane fact of life that it once was.

Right now, everybody on the Supreme Court is a graduate of either Harvard or Yale. And all of them, with the exception of Clarence Thomas, grew up in wealthy families, and lived most of their lives in wealthy counties in blue states. (Thomas grew up as a dirt farmer in Georgia.)

The justices are, again with the exception of Thomas, very strongly accultured in America’s bicoastal ruling class. This is the reason why so many justices who are supposed to be conservatives end up consistently voting to the left of the Republican base that puts them into power.

If you analyze the justices not by party, but by whom they hobnob with and whether or not they grew up in comfortable circumstances, you do not get the usual conservative/liberal breakdown; rather, you get Clarence Thomas versus everyone else. While the other justices are, for the most part, opera lovers who go on expensive foreign vacations, Thomas spends his summers driving around Middle America in an RV, overnighting in Wal-Mart parking lots, and chatting with the Deplorables.

When Donald Trump was elected President, a lot of his more optimistic supporters looked forward to seeing him make the Court more diverse by adding people from non-coastal states with alma maters other than Harvard or Yale. (You may not think that getting your degree at Notre Dame makes you a Deplorable, but to a very large percentage of America’s ruling elite, it does).

With Gorsuch, Trump sort of fulfilled those expectations. While he was a Harvard alumnus like most justices, he was from Colorado rather than a coastal state. And his mother’s poor treatment at the hands of respectable Washington society when she served as head of the EPA under Reagan left the younger Gorsuch with a sour feeling toward said society. Kavanaugh, on the other hand, was born in Washington DC and had always been comfortable there – not a promising trait!

But Barrett is better than either. She was born in Louisiana, went to school in Indiana, lived in Indiana for most of her adult life, gave birth to five children, and adopted two more from Haiti.

This alone does not prove that she will be a consistent conservative on the bench. After all, power can corrupt anyone; Sandra Day O’Connor grew up on a ranch in Arizona and ended up as a socially liberal swing-voter. But Barrett’s background should still count in her favour.

Some liberals, having realized that the Democratic party is completely helpless to stop Barrett’s confirmation, have started threatening to add new seats to the Supreme Court if Biden wins in November, so as to move its balance back into safely liberal territory.

I am not opposed, in principle, to court-packing, because I see the ability of Congress to engage in such tactics as a necessary – but alas, never used – constitutional safeguard against dictatorship by committee. (For obvious reasons, I am not in favour of the pro-dictatorship-by-committee party packing the Court).

But right now, it is all empty bluster. Even if they win the Presidency and all the close Senate races, the Democrats will only have 50 or 51 senators to work with. That just isn’t enough to get such a major reform through, even if they abolish the filibuster, which is something they are also talking about doing. There are too many Democrats who would get cold feet – people like Joe Manchin of West Virginia, who has found himself stranded in Trump country and now must cling to office by taking a centrist line on most issues.

Alarmist Democrats and optimistic Republicans have been talking up the Ginsburg-Barrett transition as a threat to Roe v. Wade. This is because Barrett is an almost-certain vote to overturn that decision. But the trouble is that, like in 1992, there are far too many moderate Republicans gumming things up.

Back then, when the conservative bloc came closest to overturning Roe v. Wade but still fell short by one vote, the Court had eight Republican appointees. (To add to the irony, the lone Democrat, Byron White, was a moderate who always voted against abortion rights).

The Court’s conservatives failed to defederalize the abortion issue back then because most Republican politicians do not care about abortion and only pay lip-service to the pro-life movement. The result is that they nominate judges about whose judicial philosophy they know little or nothing: people like O’Connor, Kennedy, and Souter. Then they palm these appointments off as wins to their gullible base.

The same thing happened with John Roberts in 2005. In order to maintain his status as leader of the Court’s conservatives, the new Chief Justice mostly followed the original constitution for his first 12 or so years on the bench, then made a hard run to the left just in time to step into Anthony Kennedy’s role as de facto King of America.

In order to keep Roe v. Wade in place after Barrett, the liberals will need to pick off another Republican appointee. Barrett herself is not swingable; neither is Thomas or, in all likelihood, Alito. I am optimistic about Gorsuch; I put his odds at voting against abortion rights at 80 percent.

Kavanaugh seems like the weak link; my guess is that there is only a 40 percent chance that he will vote against abortion when it’s his turn to decide. Multiply out those probabilities and you get a 32 percent chance that Roe v. Wade will be overturned by the new six-justice Republican majority.

I sure hope it happens, but I am not holding my breath. Trump chose well with Barrett, and to a lesser extent with Gorsuch, but with Kavanaugh, he picked someone whose beliefs were way too murky.

The sad truth of the matter is that when you are trying to get people to divest themselves of power voluntarily, you will almost always fail. That is what the conservative movement has been doing with the Supreme Court for the last fifty years or so, when it has, time after time, placed seemingly principled men (and one woman) into a position of practically unlimited power and then crossed its fingers in the hopes that the power wouldn’t corrupt them.

What we needed after the abuses of the Warren and Burger Courts was radical reform; we didn’t get it, and we have spent half a century dealing with the consequences. One of those consequences is that the stakes of Supreme Court nominations are way higher than they ought to be. Another is that, for conservatives, the occasional win – like what they are about to get with Judge Barrett – is not enough to offset the broader pattern of losses.