Reflections on the Two Bombs 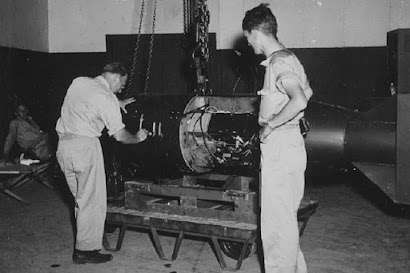 Most people don't think much about history. One way you can see this is by looking at all the insistence that the current Coronavirus pandemic is the worst disease outbreak that the world has seen since the Spanish Flu of 1918.

While this insistence may be necessary to justify the massive overreaction to the Coronavirus, even a cursory examination of the relevant Wikipedia pages will reveal that the Asian Flu of 1957 was quite a bit deadlier than what the world is going through right now. What’s more, the 1957 Flu managed a higher body count on a planet with only 37 percent of the current global population.

But if you ask anybody what they know about 1957, it’s very unlikely that they’ll mention the Asian Flu. Some people remember 1957 as the year that the Russians launched Sputnik; some remember it as the year that Elvis made Jailhouse Rock and then got drafted. For America as a whole, life continued as normal, in the midst of a pandemic that was, objectively, quite a bit worse that the one we’re stuck with right now.

But there’s no doubting that 2020 is just going to be remembered as the Year of the Bat. No matter how anticlimactically covid itself ends up fading away, the economy will still be a wreck and the US dollar will be a lot closer to not being the global currency anymore.

But I digress. The whole reason I mentioned the historical amnesia of the current generation is because I wanted to comment on one of the other, less bat-infested aspects of 2020, namely, the passage of all those 75th anniversary milestones for famous events near the end of World War II. I already wrote a little about V-E Day; now I’ll be writing about the atomic bombings of Hiroshima and Nagasaki.

Chronicles Magazine and the American Conservative are on the more thoughtful end of the media spectrum; each ran articles yesterday discussing, with some depth, the military and ethical aspects of President Truman’s decision to use the two bombs. But in most of the media, we get crickets.

Now, I should probably preface what I’m about to write with a big caveat, namely this: I do not have a strong opinion about the bombings. I have no desire to pick apart either President Truman or his detractors on ethical grounds. I wasn’t there when it happened, and it came at the end of a long and bloody war in which everyone involved had long since had plenty of reasons to give up on the idea that it was possible to fight with decency and still win.

But even though I don’t have strong opinions, I do have some interesting things to say that I think can make the conversation more reasonable. So, without further ado, here are some of my reflections on the two bombs.

It is pretty common to hear Americans, especially conservatives, say that the nuclear strikes “saved millions of lives” and justify that statement by comparing the 250,000 or so lost in Hiroshima and Nagasaki with the millions that would have died on both sides if the United States had proceeded with the plan to invade the Japanese home islands, which was scheduled to begin on 1 November with Operation Olympic, the invasion of Kyushu.

Now just think about how that “saved lives” claim would sound to somebody whose family was killed in Hiroshima or Nagasaki.

But there’s more to it than that. “Bomb or Invade” weren’t America’s only options. We could have blockaded Japan, cutting the Japanese off from the world without bringing the war to their home islands at all. Or we could have dropped the insistence on unconditional surrender and tried for a negotiated peace after Iwo Jima and Okinawa.

There is no telling how those scenarios would have played out, and there are good reasons to be believe that both would have been bad ideas. But absent the kind of omniscience that would let us precisely compare every single alternative, looking at a pair of missions which incinerated upwards of 40,000 civilians each and left tens of thousands more to die of radiation sickness or cancer, and then summing them up as something that “saved lives,” is just way too crass.

I prefer to stick with saying that, considering what the actual circumstances in 1945 were, the bombings were probably a good idea.

Since the most common argument in favor of the bombings – that an invasion of Japan would have been much worse for everyone – is so strong, the world of armchair generalship has found itself in need of new ideas. One of those is to say that, by August of 1945, Japan’s air and sea power had been reduced to almost nil, therefore, America could have foregone both bombs and invasion, and just blockaded the Japanese in their islands and waited for them to surrender. The basic premise is laid out fairly well in this article at the American Conservative.

There is some merit to the idea; indeed, much of the reason that the more death-cultish end of the Japanese high command was looking forward to a ground invasion was that it would give the Japanese an opportunity to kill Americans, something which, at the moment, they were largely unable to do. A blockade, on the other hand, would take advantage of America’s total dominance of air and sea, ensuring much smaller combat losses.

But that would require ignoring the rest of Asia. In the Pacific Ocean, Japan was thoroughly beaten, but in Korea, Manchuria, much of China, all of Indochina, and the Dutch East Indies, the Japanese occupying armies were still very much in control. And a continuation in the fighting in these territories didn’t just mean military deaths, it also meant that the civilian population would be treated with extreme brutality.

Perhaps you have heard of the Rape of Nanking – basically, when the Chinese city of Nanking fell to the Japanese in December of 1937, the Japanese army went on a raping and slaughtering rampage and killed somewhere between 40,000 and 300,000 Chinese civilians. To put that in perspective, the higher end of that range exceeds the number of Japanese killed by both atomic bombs. Anything that lengthened the war would give the Japanese more opportunities to repeat such actions.

Then there is the Jatropha Famine, which Americans are even less likely to know about than the Rape of Nanking. The site was the occupied Dutch East Indies (now Indonesia).

Japan fought the whole war with a huge oil shortage. Indeed, the Japanese’ massive logistical inferiority, viz. the United States, was in large part what doomed their forces to suffer one huge rolling defeat in all but the first few months of the war.

In an attempt to shore up their fuel supply, the Japanese forced millions of Indonesian farmers to replace many of their food crops with Jatropha, a fast-growing tree whose nuts can be pressed to yield fuel oil.

The whole project was a complete failure. The Jatropha didn’t make nearly enough oil to turn the tide of the war, and the only real result of this program of crop replacement was a famine that killed about 4 million Indonesians.

To put that in perspective, the number of Japanese who died in every action of the war from Pearl Harbor to Nagasaki is somewhere between 2.5 and 3.1 million.

This is the sort of thing that would have kept on happening if the Japanese hadn’t surrendered in the summer of 1945.

3.     Ordinary Americans Were Afraid That Japan Had The Bomb

When you get all your history by reading books written long after the events they describe, and when you begin every story with a rough idea of how it is going to end, you’re missing out on something, because that’s not how the people who lived through history experienced it.

We in 2020 know how difficult the Manhattan Project was, and how much cutting-edge physics and industrial brute-force went into it, and how Germany was the only other country that even tried to develop nuclear weapons during World War II. Harry Truman, Winston Churchill and Josef Stalin also knew these things, along with their senior commanders and scientists, but pretty-much nobody else at the time did.

The typical American, whether soldier or civilian, hadn’t the faintest inkling of what was going on until he opened the newspaper on 6 August and read about how “the atomic bomb weighs about 400 pounds and is capable of utterly destroying a town” by utilizing “the force from which the sun draws its power.”

Somewhere near the middle of the New York Times’ long article about the new weapon, the reader is notified that Secretary of War Stimson is “convinced that Japan will not be in a position to use an atomic bomb in this war.”