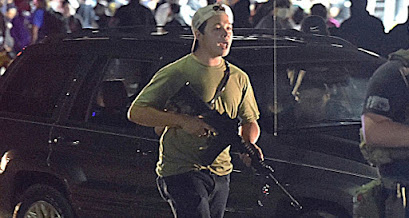 When I first wrote about the George Floyd Riots a few days after they got started, I said that things like the Minneapolis Police Department’s willingness to let one of its stations be burned down rather than risk combat with the “protesters” were evidence that the forces of law and order were pushovers.

Back then, I thought that the unrest was going to last for at most two or three weeks, like earlier riots usually did. Lo and behold, more than three months later, the fiasco is still going on. It has now lasted longer than the famous “Hundred Days” of Napoleon’s second reign, between his triumphant return from Elba and his abdication after Waterloo. That’s right, America’s leadership is taking longer to quell the Floyd Riots than it took the Seventh Coalition to dethrone the Emperor of the French.

Now it is worth noting that despite the surprising length of the riots, their intensity is still rather lackluster. Even three months in, the total body count is lower than for the six-day-long Rodney King Riots in 1992. For this reason, I am not going to hop on the bandwagon of people talking about imminent collapse and “Weimar America” and so forth.

What we’re dealing with right now is special anarchy, not general anarchy. The rioters can’t break any laws that they want (just ask the people in Portland who tried to set up a CHAZ in a wealthy neighborhood). Rather, what has happened is that the authorities have chosen to allow certain people, in certain places, to engage in assault, arson, and looting in order to send certain political messages to certain other people.

Most Americans dislike the riots and wish that they would go away. But the people on the side of law and order are getting their asses handed to them anyway, because, for the most part, wishing that the riots would go away is the full extent of their involvement.

Riots don’t last for a hundred days unless the typical rioter can expect that, should he steal something or set something on fire, his chances of getting put on trial for the deed are close to zero. The facts on the ground are that, in 2020, law enforcement is going a lot softer on rioters than it has hitherto done. Perhaps one may excuse the actions of individual police departments on the grounds that so many of them are working under Democratic governors, and dealing with a legal system where the use of force can lead to expensive lawsuits. Be that as it may, the salient fact here is that large areas of the country are not being policed.

Every university and every corporation knows exactly which side it needs to pander to in order to stay out of trouble. As just one example of the kind of concession that the mob is getting, at the university where I am presently enrolled, the Student Government Association prefaces every email, no matter its topic, with a long screed about how “black lives matter.” And they do it, in part, because if they hadn’t, then the BLM people would have made a lot more noise than any conservatives are making right now.

Ditto with the cancellation of the Paramount show Cops back in June. Are there millions of Americans who liked that show, and millions more who never paid much attention to it, but will gladly talk about how sickening they find it that a profession which keeps us all alive is now considered unworthy of a sympathetic role on the television screen? You bet. But here’s the trouble: these people aren’t upset enough to boycott Paramount’s other shows over the decision. So Paramount looks at the intensity of each side, and makes a rational decision about whom to appease.

And at the top of it all, Donald Trump sits in the White House, tweeting out empty threats against the rioters in the serene confidence that he won’t lose any voters because, after all, the other party is so much worse.

And then Kyle Rittenhouse shows up.

Kyle Rittenhouse is a 17-year-old boy from Antioch, Illinois, who has long admired police officers and planned on becoming one, and who at some point in the last hundred days or so woke up to the fact that his side in the present conflict was getting bested. So when the Kenosha riots broke out, he armed himself with an AR-15, drove the 30 miles or so to Kenosha, Wisconsin, and mingled with a crowd that had answered a call for volunteers to guard a machine shop.

When the rioters appeared, they and Rittenhouse got into a fight – nobody knows quite how it got started – in which they were caught on video throwing rocks at the boy and beating him over the head with a skateboard. Then Rittenhouse shot three rioters, two of whom died, and calmly surrendered himself to the police. Memorials to the two dead men sprang up all over the country, because as far as the left is concerned, the fact they both had long rap sheets (one included domestic battery, and the other included statutory rape) is no obstacle to their new status as heroes.

Man, that kid was brave.

It’s not going to end well for him. The prosecutors will probably find ways to extrude at least a dozen different charges out of his act, so that they can lose on most of them and still put him away for a long time. For the murder charges, Rittenhouse will probably get off on self-defence; after all, even though the other men’s domestic battery and statutory rape convictions have no official weight, they’re pretty good evidence that Rittenhouse didn’t pick his victims at random.

What’s really going to hurt him is the underage-carrying-of-a-weapon charge. For that, there’s no getting out by pleading self-defence. (Did you know that there are jurisdictions in which, if a 17-year-old girl uses mace to thwart a rape attempt, then calls the police to report what happened, she can be jailed on an underage weapons charge whether or not her wannabe rapist is ever caught? Well, there are. And what Rittenhouse did is way, way bigger then spraying some guy with mace).

After he gets out of prison, Rittenhouse will be looking at a civil wrongful death suit where the standard of proof is lower and there is no right against double jeopardy. If found liable, he will be slapped with a bill for more money than he’ll ever make in his lifetime.

Does doing all of this mean making hash of the original understanding of the Bill of Rights? You bet. But it still gets done.

Now for the big question: was it worth it?

Honestly, I don’t know. To me, the Floyd Riots just aren’t as big of a deal as they are to some patriots, and I don't see the BLM movement as Threat No. 1 to America’s freedom. You’ve got to remember that these people are not a well-organized revolutionary army with a realistic chance of installing a Marxist government – after all, most of them couldn’t even tell you what a Marxist is. Rather, the BLM thugs are just a dumb, postmodernist rabble which was created by the left-wing plutocratic oligarchy, which is being used by said oligarchy as a stick with which to poke its already-prostrate enemies, and which will be discarded by the oligarchy in due time.

But the point still remains that Kyle Rittenhouse did not go softly into that good night.

And most people on the right have gone softly. Or they will, at any rate.

If you are a kid in his late teens with no job or wife or children to tie you down – and not having those things is the reason why kids like that are easier to recruit in a war than older men, and an order of magnitude easier to recruit in a resistance movement – then there are probably better ways to get in your one big act of brazen defiance.

For example, I have said before that, when a man finds himself in a child custody fight with his ex-wife who wants to raise his child as the wrong gender, then the morally correct response is to flee to a less insane country, such as Russia, and seek asylum. Now, in practice, any attempt at this would be very failure-prone, not least because every time those cases hit the news, the fact that thousands and thousands of internet commentators say “He should flee to Russia” probably makes the police start listing the things they’ll need to do to make sure that the man doesn’t flee to Russia.

But fleeing to Russia becomes much easier with the help of a secret assistant, who can do things like rent Alaskan bush planes without cluing in the ex-wife’s lawyers to what is about to happen.

If I were giving advice to a young man looking for a way to poke the system in the eye – and if said young man had nothing that he wasn’t willing to leave behind in order to do it – then I would tell him to get his pilot’s license and quietly prepare for just such an action, then make himself known to those who might have a need of his services, in the hopes that one day, one of them would say yes.

After all, a little boy or girl saved from the delusional left and living happily with his or her father in Moscow or Kazan or Vladivostok or wherever is a better legacy to leave behind than a pair of dead thugs. And for the teenager himself (who would probably be in his early twenties by then), starting a new life in Russia, though not easy, would beat the stuffing out of spending the next decade or so rotting in an American prison.

That’s the sort of thing that young people do in effective resistance movements – movements which have functional adult leadership to train and guide the youthful passion and courage on which the struggle for liberty has always relied.

And I think that it is pretty clear who has my sympathies.

When I first wrote this piece, I noted that one of the men killed by Rittenhouse had previously been convicted of statutory rape. At the time, I didn't know the details, but in case any of my readers are wondering whether or not this was simply a matter of an 18 or 19-year-old kid having sex with his teenage girlfriend; no, it wasn't. As it turns out, the man had been convicted in an Arizona court back in 2002 for sodomizing a number of nine to eleven-year-old boys.