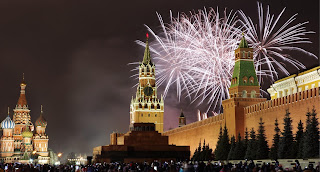 As I write, two events of the last week have caught the world’s attention.


On 4 July, Americans celebrated their 244th Independence Day (at least, the fraction of Americans who don’t consider that holiday to be racist celebrated it). As has been done for more than two centuries, fireworks were shot off to celebrate our forefathers’ victorious fight for limited government, representative democracy, and freedom from British rule.

A few days earlier, on the other side of the world, voters in Russia approved a long list of constitutional amendments which had been proposed by President Putin and the Duma back in January. It’s impossible to summarize all of them here, as forty-one of the Russian constitution’s articles were rewritten and five new ones were added. In the West, the most talked-about changes were the reset of Putin’s term limits (so that he can remain president until 2036 rather than 2024) and the explicit requirement that marriages be between persons of opposite sex (a restriction which already existed in statutory law).

Honestly, if I were a Russian, I don’t know how I would have voted on the changes. All other things being equal, I don’t think it’s a good idea for the same man to be in charge of a country for 36 years. On the other hand, Russia at present has no strong leader ready to step into Putin’s place, so sending him into retirement too soon might just return the country to Yeltsin-style kleptocracy. Like all political decisions in the real world, there are both pros and cons to each side.

In the end, about 78 percent of Russians voted in favor, and just 22 percent voted against, so the amendments were enacted. Was this a step forward or backward for the cause of democracy in Russia? Most westerners would probably say backward, what with Putin likely to be president-for-life and all. But if you define a democracy as a regime in which major changes to the laws and constitution must be approved by the people, rather than as one in which the people always make the decision which you personally think is best, then the referendum was, if not a step forward, then at least a signal that today's Russia is a functioning democracy.

Now take a look at the situation in the United States. Officially, our constitution has been amended only once since 1971 – that would be with the 27th amendment, proposed alongside the Bill of Rights in 1789 but then forgotten about until its ratification in 1992, which prevents congressional pay raises from taking effect until after the next biennial election.

Now, everybody knows that, in practice, this hasn't been anywhere near the most significant change to the official meaning of the US constitution in the last 49 years. It is quite easily overshadowed by, among other things, the constitutional rights to abortion and same-sex marriage, and by whatever quirk of modern jurisprudence allowed President Obama to enact DACA by executive order in 2014 but prevented President Trump from rescinding it by the same mechanism three years later.

Nor, for that matter, are policies beneath the constitutional level usually approved by America’s elected legislature. Apart from gigantic budgetary appropriations and the occasional watered-down tax reform, Congress has passed perhaps five significant pieces of legislation since the turn of the century – the No Child Left Behind Act, Medicare Part D, the Iraq War Authorization, the Affordable Care Act, and the Dodd-Frank Bill. With few exceptions, the regulatory agencies that determine how millions of Americans must live and work are running on autopilot.

Any real American patriot who looks at this situation ought to be incensed that the liberties which his fathers fought and bled for have declined to the point that, nowadays, Americans have less say in how they are governed than Russians do. Nevertheless, very few Americans feel this way.

Too many of us believe in the unconditional exceptionalism of our own country – a belief which the founding fathers did not share, and which is bound to ruin the politics of any country which adopts it. If, as most right-wingers believe, we are guaranteed to be the freest country no matter what we do, then what reason do we have to fight for our liberties?

Also, too many of us believe in linear history. The Revolutionary War, we are told, was a one-off event. Once it was won, the founders gave us a new and enlightened system of government to make sure that we would never need to have a similar revolution ever again.

I, on the other hand, believe in cyclical history, in which nothing is permanent. What was won by the bravery and wisdom of one generation can be lost by the cowardice, or carelessness, of another. Past greatness is no guarantee of future greatness. And if the freedoms that Washington and Jefferson fought for in 1776 are, in the year 2020, being exercised by Russians but not by Americans, then the proper response, on the part of the American patriot, is not to deny what is going on or understate the gravity of the situation.