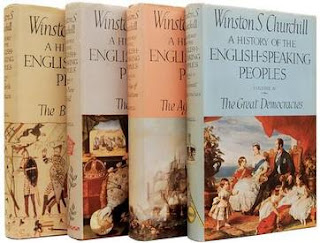 Only three people have won the Nobel Prize in Literature for writing history. This is quite the disappointment to someone such as myself, for whom history is by far the most interesting branch of literature. (If you find Herodotus more interesting than either Homer or Plato, then you and I just might have something in common).

The first of these three special Nobel Laureates was a now-obscure German named Theodor Mommsen, who won the 1902 prize for his monumental History of Rome. The second is a bit more famous – his name was Sir Winston Churchill.

Few people realize it these days, but Churchill was a writer before he was a politician. Prior to the outbreak of the First World War, Churchill was already well-known in both Britain and America for his work as a journalist and for his memoirs of his youth as a cavalry officer in the wars in Sudan, India, and South Africa.

Churchill also had a seat in Parliament, but that was mainly because he entered public life at the tail end of the time when the life of the aristocracy included sitting in Parliament pretty-much as a hobby. Winston Churchill’s father, Lord Randolph Churchill, was an important enough fellow to see to it that his boy got elected to represent Oldham a week before his 26th birthday. But until he joined the cabinet during the First World War, the younger Churchill was famous mainly as a writer.

When the war ended, so did Churchill’s first experience in government. During his years as a back-bencher in the 1920s and ‘30s, he found time to start composing his mature works: The World Crisis, a five volume history of World War I, and Marlborough, His Life and Times, a four volume biography of his famous ancestor John Churchill, First Duke of Marlborough.

In the late 1930s, Churchill began his History of the English-Speaking Peoples, a four volume epic endeavouring to unite the stories of Britain and all her daughter countries, most importantly the United States. But he didn’t get to finish it as soon as he would have liked, since beginning in 1939, he was occupied with other affairs, and then with writing the six volumes of his History of the Second World War, which saw print between 1948 and 1953. It was also in 1953 that he received his Nobel Prize in Literature.

Churchill was 80 years old when he retired from his second premiership in 1955, and over the next three years he finished and published the History of the English-Speaking Peoples. It was to be his final significant work.

There are four volumes; each runs for about 300 pages and is divided into three books, making twelve books in all. Book I tells the story of Britain from prehistoric and Roman times to the Saxon dynasty founded by Alfred the Great. Book XII begins with the rise of Disraeli and Gladstone in the 1860s and ends with the death of Queen Victoria in 1901. The four volumes are entitled The Birth of Britain (prehistory to 1485), The New World (1485 to 1689), The Age of Revolution (1689 to 1815), and The Great Democracies (1815 to 1901).

Reviews at the time described Churchill’s prose as “scintillating.” I myself would not go so far; Churchill isn’t a boring writer by any means, but his writing doesn’t draw attention to itself, and when one is spanning such a long period one has got to be laconic on most occasions. At the same time, Churchill manages to bring his characters to life in a way that all too many historians don’t.

A word is in order concerning who those characters are. Churchill’s work is primarily a military and political history. If you are a monarch, MP, general, or admiral, you will likely figure prominently in his tale. (If you are John Churchill, First Duke of Marlborough, then you get to be the hero of Book VII – nobody else in the whole work comes in for even half as much praise).

Otherwise, little will be said about you. Do not go to Churchill if you are trying to educate yourself about the economic, industrial, scientific, literary, or religious goings-on of England and America’s past. Thomas Cranmer, John Milton, Isaac Newton, James Cook, and Thomas Edison, to name just a few, are figures who get only a single sentence, or none at all.

But I am not going to characterize this as a mistake on Churchill’s part. There is only so much you can do when you squeeze two millennia of history into 1200 pages. If Book XI, which covers American history from 1815 to 1865, spends only twelve pages on events before 1850, while devoting nearly 80 to the four years of the Civil War, then that is very much by intent. Battles and parliamentary debates were what interested the author, so battles and parliamentary debates were what he wrote about – and he wrote about them well.

There are three more factors in Churchill’s work which I think deserve mentioning simply because they differ from what many of my readers may be used to seeing in a historical work. The first is Churchill’s lack of excessive moralization. History as he tells it has heroes and villains, as English history has always had; Alfred the Great is a hero, Richard III is a villain, and so forth. But Churchill does not feel the need to flatten out every event into a simple battle of good and evil. In his telling, most of the conflicts – Roundheads vs. Cavaliers, William III vs. the Jacobites, Yankees vs. Confederates, the French Revolutionary Wars, and even the Boer War in which he himself fought – feature fully drawn characters on both sides.

The second factor is the view of the American Revolution from the losing side, which makes up much of Book VIII. We Americans aren’t used to hearing our nation’s founding story presented as less of a heroic struggle for liberty by brave colonists than a tale of blustering incompetence on the part of British generals and statesmen grown overconfident after their successes in the (now-obscure) Seven Years’ War. But to a patriotic Englishman like Churchill, that is what it was.

And the third factor is simply the natural sense of pride in one’s national heritage, a pride which went unnoticed in Churchill’s time, but nowadays is exceptional enough to be noteworthy. Thus a (patriotic) historian in modern Britain will devote much of his work to explaining things like the British Empire’s role in extirpating the slave trade. Churchill doesn’t do this, for the simple reason that, in his days, the superiority of European civilization was sufficiently uncontroversial that nobody felt a conscious desire to push back against the white-man-bad version of history.

On the whole, Churchill’s History of the English-Speaking Peoples is worth taking a look at. I would never recommend it as someone’s only source on Anglo-American history – there are simply too many things that get glossed over – but if you are going to add another perspective to your body of historical knowledge, then you could certainly do worse than taking the time to see the history of England and her most famous colony through the eyes of Sir Winston Churchill.