As city block after city block burns, the George Floyd Riots are forcing Americans to confront some uncomfortable facts. One of these is that, from the Left’s point of view, riots are an effective way to get political change. Another is that the people who claim to stand for law and order are all pushovers.

A lot of people on the right have spent the last week or two talking about how infuriating or appalling it is to hear the media call the George Floyd Riots a “protest.” I am not one of those people, for the simple reason that I have long since ceased to get emotionally wound up in the behavior of the American news media.


And yet, while I am not infuriated or appalled, I must admit I am at least surprised by what’s going on. I honestly didn’t expect the glorification of random violence to so quickly become the norm among the chattering classes. After all, if I recall right, nobody ever insisted on calling the Rodney King Riots anything but a riot. This time, though, it’s different.

Now I am not going to go so far as saying that this marks the beginning of the end for America, or that it’s some sort of tipping point. Right now, we are still quite a ways away from the level of violence that our country trudged its way through in the 1960s. Even so, there are some uncomfortable lessons here, especially for those of a conservative temperament, who value public order and continuity.

It’s a pretty common thing to look at any outbreak of political violence (or even just plain old civil disobedience), say that the problem that sparked it is real (in this case, that George Floyd’s death was a clear case of murder), but that breaking the law is always the wrong way to deal with it, and then go back to one’s ordinary, comfortable life in the confidence that eventually, everyone else will too.

At the same time, hardly anyone at all would be talking about the death of George Floyd if the riots hadn’t happened. It’s ugly, but it’s the way the world works. The price of being a polite, nondisruptive protester is that almost everybody ignores you.

A riot is different. Just consider the biggest long-term consequence of the Rodney King Riots. Ever since 1992, it has been common all across America for police departments, when training new officers, to show them the video of the LAPD beating Rodney King and say “don’t do that.”

Are there more ethical ways of getting attention than burning and looting random, private businesses? You bet. This is not like the Boston Tea Party, in which Sam Adams’ boys made a point of destroying no other property except the tea whose importation they were protesting, and they carefully searched departing tea partiers to make sure they hadn’t yielded to the temptation to stuff any tea in their pockets.

No doubt a more ethical way for Black Lives Matter to protest would be to erect barricades on prominent streets, defend them with clubs and stones, and burn hated public figures in effigy, while avoiding even the appearance of random mayhem or self-aggrandizement.

Would conservatives still wail about the rule of law? Of course they would. But if the goal is to put a halt to business as usual – which of course it is – then a ‘Day of the Barricades’ is a tried-and-true tradition with a long history of effectiveness in revolutionary politics.

2. Nobody Has The Courage To Fight Back

At this point, the rioters are winning. What they’re doing is an effective (though clearly immoral) way of making George Floyd a household name and getting the people who killed him arrested and charged.

Obviously, not everybody involved in this madness shares that goal. One side is concerned with getting everyone in America to talk about police brutality (and maybe also getting a new TV from Target while they’re at it). The other side is supposed to be concerned with defending law and order, and protecting both public and private property from senseless destruction.

And the people on the law and order side are nearly all pushovers.

Why did the Minneapolis Police Department evacuate their police station and allow the rioters to burn it to the ground? There’s no need to guess: the department’s spokesman said it was “in the interest of the safety of our personnel.” Why did President Trump hide in the bunker of the White House when the rioters showed up on his own lawn? Probably for the same reason.

And even in the midst of the burning and looting, the media still managed to hound Drew Brees, quarterback for the New Orleans Saints, into apologizing for his ‘racist’ former belief that NFL players shouldn’t kneel during the national anthem.

Donald Trump, despite all his bluster, would rather hide in a bunker during the peak of the rioting than actually order his forces to quell the riot. If you’re the president, you can hide for a while, and then walk right back out into the same life of wealth, power, and status that you had before. If you’re just an ordinary businessman whose bookstore or restaurant got razed, then you don’t have that option.

The Minneapolis police let their station burn because they didn’t want the media to whine in the event that defending it meant shooting somebody. They know that eventually the storm will blow over, and they can go back to work in a new police station, paid for by somebody else's money.

This won’t go on forever, but I’m pretty sure it will go on for at least another decade or two, because…

3. America’s Culiacán Moment is Coming, but it’s Still a Long Way Off

Back in January I wrote about how the future of the United States will likely look like the present situation in Mexico, in which the central government, too weak to keep order, slowly surrenders control of large parts of the country to heavily armed gangs. In Mexico’s case, an important nobody-can-ignore-this moment came last October, in the Battle of Culiacán. That’s when 700 Sinaloa gunmen, wielding 50-cal rifles, rocket launchers, grenades, and armoured vehicles, defeated the Mexican National Guard and demanded that the Mexican government release the imprisoned son of the Sinaloa Cartel’s leader.

The Mexican president, Andrés Manuel López Obrador, complied, as many people expect him to; he had, after all, run for office on a platform of rapprochement with the drug cartels. His reasoning – that surrender was necessary to prevent further loss of life – was the same as that of the Minneapolis police who let their station get burned down by the mob. (To be fair, the city that the cartel had just captured was home to over 700,000 inhabitants, and had Obrador not acquiesced, he would have been facing a huge massacre).

As for the situation here in the United States, one can only imagine how much worse the riots will be during the next round of the political cycle, when a Democrat holds the White House and the whole administration is sympathetic to the rioters.

In an eclectic article at the American Conservative entitled “Fleeing the Collapsing Imperium”, Rod Dreher is comparing President Trump to Tsar Nicholas II, a weak and indecisive leader who failed to react to the Bolshevik threat until it was too late.

A key difference between Russia then and America now is wrapped up with the fact that to have a 1917-style revolution, you don’t just need a Nicholas II, you also need a Lenin. You need an insurgency that is organized enough, and intellectually coherent enough, to actually take over the government, not just burn some stuff, yell about how the police department should be defunded or abolished, and then go home.

The modern American left is incapable of producing a Lenin, either now or at any time in the foreseeable future. Give them a few more decades, though, and we could have our own President Obrador, and our own Battle of Culiacán. 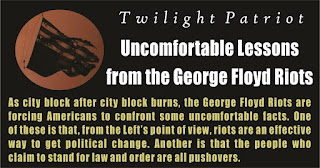