Why I Don't Fear Chinese Hegemony

As Chinese economic power continues to grow, more people are talking about the threat of Chinese hegemony. I think the fears are overblown. China has neither the means nor the will to dominate the globe, and China is already facing a lot of the same long-term problems that are now afflicting the United States.

If you follow a doctrinaire conservative website like The Federalist, you’ll notice that Red China is a regularly-appearing villain, taking turns alongside congressional Democrats, climate activists, the transgender movement, Planned Parenthood, teachers unions, Muslims, and the leftist media as the daily object of contempt.

Some of China’s villainies are genuine – i.e. the bad treatment of the Uighur Turks. Some are clickbait – for instance, just yesterday The Federalist ran an article entitled “How A Chinese Space Experiment Almost Caused A Massacre In The United States,” in which the uncontrolled deorbit of an empty rocket, which actually ended up hitting the Ivory Coast, was trumped up into a reckless attack on American lives. Is this sort of thing routine for countries with a space program? Yes. Did the American Skylab station do the same thing in Australia? Again, yes. Has space debris ever actually killed anyone? No. Will any of this get in the way of a good headline? Again, no.

Then there are the China stories which you have to really think about – for instance, is China to blame for the Coronavirus? Well, the authorities there did cover it up for the first month or so, but once they realized what a big deal it was, they were pretty tough on it. This mixture of competence and lackadaisicality is pretty standard for government response to crisis, and I don’t think that western countries like the US or Italy are in a position to complain.

What about China being a currency manipulator and running up a trade surplus with the US that puts American laborers out of work? Again, you have to remember that China is not the only actor here. Nobody is forcing the US to consume more goods than it produces. In fact, it would be impossible for us to even have a trade deficit without the huge amounts of fiat money and government debt that we export in lieu of actual goods or services.

America keeps doing this because our own industrial plant is so badly decayed that we couldn’t maintain a first-world standard or living without cheap imported goods. Do the workers whose role has been taken over by the Fed’s printing press get to share in that standard of living? No, they don’t, but then again, the lower classes have never had much of a say in monetary policy.

What is the Chinese’ role in all this? It is simple: they are lending us the money to buy their own products. It isn’t something that’s going to work out well for China in the long term. We certainly aren't being bested us in any kind of ‘trade war.’

So what is my point here? Well, the overarching theme is that China doesn’t have all that much influence on the United States. Currently, we are Top Nation – and the uncomfortable thing about being Top Nation is that you don’t get to blame anyone else for your problems: conditions in America are what they are because Americans in positions of wealth and power have decided that those conditions are acceptable.

For example, we have a big trade deficit because the financial interests that control the supply of dollars have both the desire and the power to fund that deficit.

Needless to say, they won’t have that power forever. China is already ahead of us in population and (real) domestic product. One of these days, China will be ahead in trade and military power as well. When this happens, the Yuan will probably replace the dollar as the preferred international currency. After all, somebody has to be Top Nation.

But China will start its era of dominance in a weaker position than the United States ever was. Owning all that bad American debt will take a bite out of the Chinese economy. Furthermore, China’s present-day oil reserves are about three-quarters the size of America’s – which on a per capita basis is a mere 17 percent as much oil. While the need for foreign energy is going to be an incentive to develop hegemony (it certainly was for the US) its also going to make it a lot harder for China to have the sort of sustained economic boom that launched America to the top of the global order in the first three decades after World War II.

Then you have to look at the Chinese military. The Chinese have not fought a war since the 1970s, when they had some skirmishes with Vietnam. Nor do they seem to have much interest in changing that. They have chosen not involve themselves in Middle-Eastern conflicts the way that the Americans and the Russians do.

Right now, the main emphasis of China’s foreign policy is on trade. The Belt and Road Initiative has stirred up controversy because a lot of third-world leaders, most importantly Narendra Modi, dislike the idea of having China own infrastructure in their countries. But the Chinese aren’t interested in using military force to impose the Belt and Road on countries that don’t want it – they’re confident that the persuasive effects of commerce will be sufficient on their own. It’s all a soft power thing.

Will this change in years to come? Certainly. China will get bolder as American power wanes. Taiwan will probably fall – the Taiwanese might be able to hold out if they were willing to fight on the beaches like the Japanese at Okinawa, but that is a very doubtful scenario; not much can be said in favour of a country so apathetic about its future that the people only have 1.05 children per family (for comparison, Red China’s fertility rate is 1.68).

I instead expect the following anticlimactic end: the Chinese will blockade Taiwan with their navy and tell the Taiwanese that they can have a normal economy again if they accept the same status as Hong Kong. Thus Taiwan’s story will end, not with a bang, but with a whimper.

Perhaps you think that I am being short-sighted in my insistence that China’s present preference for soft power will change little during its era of dominance. After all, the United States of 1890 wasn’t exactly dreaming of global domination, but we still managed to grow into that role over the next hundred years.

The problem for China is that China doesn’t have a hundred years. Remember that 1.68 fertility rate? Well, China has been at sub-replacement levels since 1992, and that isn’t about to change. The number of men at prime military age is shrinking, and it will keep shrinking. The combination of peak oil and a declining and aging population will knock the wind out of the Chinese economy sometime around mid century.

Who will be the global leader after China? Most likely no one. India will be the most populous country by that time, but notwithstanding all that the Indians have contributed to philosophy, religion, mathematics, and art, their culture has never done mass-organization or foreign conquest as well as the Chinese, which is why India is, and will likely continue to be, a regional power only.

Russia, for the moment, is militarily and technologically strong, but despite the striking recovery in Russia’s fertility rate after it bottomed out at 1.16 in 1999, the number has since plateaud at 1.76 children per family. Unless the Russians get it above 2 sometime really soon, I don’t expect them to even end the century with their own borders intact.

Who will be trying to take land away from Russia? Swarms of Indian and Pakistani migrants, fleeing drought and climate change and pouring forth into a warmer and greener Siberia. Will these people be the dominant force in every place they manage to invade? You bet. Will they be a global hegemon in the style of the British and the Americans of old? Not by a long shot.

So that, then, is what I expect: decentralization and, in some places, anarchy. Not a new hegemon waiting to step into America’s role like America stepped into Britain’s.

What, then, should a proactive American do? Stop worrying about China or other foreign powers, and admit that the problems worth caring about are local or personal in scale.

Be realistic about how much money you can expect to make in a declining economy, and modify your lifestyle accordingly. Be choosy about where you send your children to school. Decide ahead of time that if your ex decides to do something screwy and raise one of your children as the wrong gender, you will flee the country rather than submit.

Learn to grow your own food, and learn to use a rifle, because you will need those skills in the days when nationwide order breaks down and both farming and defense become local matters.

Eventually, local politics will revolve around questions like whether or not your town can get its act together and form a militia in time to stop the nearest drug lord from looting your storehouses and burning your crops. And when that happens, local politics will be the only politics that’s left. 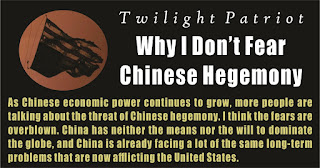