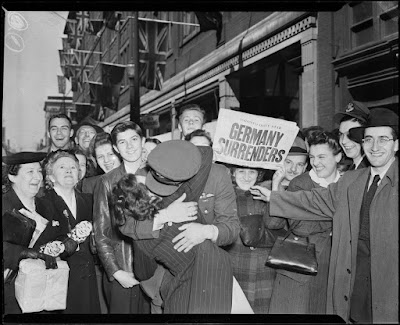 Today, 8 May 2020, is the 75th anniversary of the surrender of Germany at the end of World War II. For the first few years after the war, the holiday was a big deal in every country that was involved. It’s still a huge occasion in Russia and almost as big as Britain. (The British, for some reason, no longer put on military parades complete with tanks and rocket launchers.)

In America, we get crickets. To be fair, V-J day, celebrating the Japanese surrender on 1 September, was always a bigger deal in America, where the war started with a Japanese attack. The British, French, and Russians were, for obvious reasons, much more concerned about Germany. But let’s be honest, you don’t hear much about V-J day in modern America, either.

There’s an old saying that goes something like this: “those who do not learn from history are doomed to repeat it.” People like me, who talk a lot about decline, are among those who most frequently invoke that saying.

Nevertheless, I myself do not like it. First of all, history doesn’t really repeat. I mean, it comes close sometimes, but today’s situations never map neatly onto yesterday’s, and as I’ve gotten older I’ve gradually replaced my earlier view of history-as-cyclical with a new view of history-as-chaotic.

But the second, bigger problem with that saying is that it implies that history is a dreary subject and that the past, generally speaking, is bad. You study it to avoid it.

I prefer a different attitude – the attitude that says we should study the past because it is full of good things.

The past is full of people like George Washington, Benjamin Franklin, Thomas Jefferson, Davy Crocket, Sam Houston, Frederick Douglas, Emilio Aguinaldo, and Martin Luther King Jr. – all of whom, driven by a desire to defend the rights and freedom of their people, took risks and made sacrifices to a degree unknown among contemporary American statesmen.

During World War II specifically, we had Winston Churchill, Charles De Gaulle, Franklin Roosevelt, Douglas McArthur, Dwight Eisenhower, Theodore Roosevelt Jr, George Patton, Bernard Montgomery, Georgy Zhukov, and Klaus von Stauffenberg. Yes, we also had  Hitler and Mussolini – and if we only looked at Hitler and Mussolini, we probably wouldn’t come away thinking that ‘the past is full of good things.’

But at the end of the war, thanks to the heroism of the men I named and millions of other men, women and children, Hitler and Mussolini were dead and their empire was a smoking ruin.

That, then, is why I study history. Not as a dreary attempt to avoid repeating the mistakes of the past (which is never a serious risk anyhow - people today don't make the same mistakes as people in the past, they make different ones.) Rather, I study it to draw inspiration from the bravery of those who confronted the challenges of their time. That way, we can say, “They were willing to do hard things then, what hard things am I willing to do now?”
at May 08, 2020