Covid Vaccines and the Myth of Progress

A lot of influential people are saying that the Coronavirus shutdown shouldn’t end until someone develops a vaccine. But despite decades of research, nobody has ever managed to create a vaccine for any member of the coronavirus family. Insisting that the future will be different is magical thinking.

Perhaps you have noticed that the news these days is rather dull. Almost all that anyone does is report on the same things they’ve been reporting on since the end of March: the economic freefall caused by the shutdown, debates over the appropriateness of the shutdown, the antics of the President, the occasional arrest, the attempts by Senate Democrats to spend $4 to $6 trillion on handouts (as if the $1.2 trillion bipartisan bill wasn’t enough), and the insistence, by a large number of talking heads, that it would be totally unacceptable to return to normalcy until someone creates a vaccine for the Coronavirus.


Some experts have predicted that developing a vaccine will require two years – and then advocated keeping the shutdown going that long anyway! It’s hard to find a better example of how out-of-touch the comfortable classes have gotten from the Deplorables – that is to say, from the hundred million or so poor and middle-class Americans for whom a year without work does not mean safety and comfort, but rather poverty, homelessness, lack of health care, domestic violence, and more deaths by suicide and overdose.

But I digress. The comfortable classes won’t end up getting the multiyear shutdown they want. The Coronavirus panic has lost its hold on the common people; they’re already flocking to restaurants and beaches whenever they get the chance; the flyover states are reopening right now, and the non-flyover states will follow in shot order.

Also, I have no expectation whatsoever of a Covid vaccine.

Why? Well, like I said back in January, the best way to predict the outcome of a viral outbreak is to look at the facts of history and biology, and compare the outbreak to similar events in the past.

The present Coronavirus is not the only coronavirus out there. It’s part of a whole family of coronaviridae which, among other things, includes the viruses which cause SARS and MERS, a pair of diseases much deadlier than Covid-19. (SARS killed about 10 percent of the people who got it; MERS between 20 and 40 percent). On the other extreme, this family also includes the common cold. The coronaviridae have been around for a long time, they mutate rapidly, and no one has ever created a vaccine for any coronavirus.

So why does the media talk as if it’s inevitable that this time, things will be different? And why does anybody feel confident enough about the knowability of the future to state how many ‘years away’ such a breakthrough is?

Here’s my answer: they do it because they believe in the myth of progress.

Hence the myth of progress – the idea that history generally moves from worse to better, and that the perpetual adoption of new technologies, new customs, and new ways of doing things is the key to improving the human condition.

The near-universal acceptance of this myth, in contemporary culture, is the reason why saying that someone wants to “turn back the clock” is such a serious insult.

Do I, personally, have a skeptical view of progress? You bet. Read this blog for a while and you’ll start to see some of my reasons for believing that many of the changes that pass for beneficial “progress” in a typical view of American history were, in my own view, grave mistakes.

So why is the myth of progress so popular? Like I said earlier, myths are stories which try to explain why the world we live in is the way it is. And the myth of progress has gained so much clout because, for a long time, it has done a good job of explaining our world.

Just look at the improvements in life expectancy, material well-being, personal safety, personal freedom, literacy, education, and so forth between, say, an Englishman in 1400 and his descendants in 1900. Or look at all the useful things that were invented during that timespan.

The problem with the myth of progress comes when you start seeing improvement as inevitable. Thus stripped of your capacity for independent thought, you start accepting every change that comes along, without considering whether it is good or bad. And you hardly even comprehend the possibility that a much-talked-about change may never come at all.

For obvious reasons, it is easiest to fall into this mental trap if you have little or no sense of historical perspective. Most human cultures have had good reasons not to believe in the myth of progress. Just think about it: a Roman stuck in the progress mindset would be oblivious to the signs of his civilization’s decline and fall. A medieval man, on the other hand, might spend his whole life thinking that the discovery of the Philosopher’s Stone was just a few years away.

And as for us moderns? Well, we generally do believe in the myth of progress. Which is why you get people who claim that there is no need to worry about peak oil because fusion power is only twenty years away. (It’s been twenty years away since the 1960s). And you get people who think that the answer to the problems caused by the sexual revolution is to improve the technologies that fooled people into thinking that casual sex was a good idea in the first place.

And this is the same reason why so many people think that the F-35 must be oh-so-superior to the F-15 and F-16 (and their Russian counterparts) because it was designed four decades later and cost a lot more money. And why most people trust the psychiatric industry when it redefines natural variations in children’s behavior as mental disorders like ADHD and says that they can be chemically suppressed without any nasty effects.

The ironic thing about me saying all this is that I am not opposed to innovation per se. I am an engineer myself, and I think that the world has a need for smart and level-headed thinkers who know how to meet a challenge with the most effective design.

What we don’t need is people who confuse most effective with newest or most expensive. We don’t need people who think that every problem in life has a technological solution, or that nobody ought ever to go back to an older and more sustainable way of doing things, or that any invention we may happen to desire is bound to show up at some knowable time in the near future.

In the movies, this attitude gives us the Star Trek future. But in real life, it is giving us a near-endless economic shutdown in response to a mild viral outbreak, for the simple reason that people are afraid to come out and face a world very much like the world that their ancestors lived in day by day. That is to say, they are afraid to face a world where the future isn’t all that different from the past. 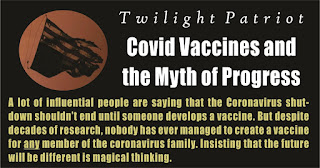