Anetocracy: The Rule of the Comfortable Classes

Support for a yearlong Coronavirus shutdown comes from one source: people who are wealthy enough that they have little to lose by staying in their houses indefinitely. Unfortunately, these people have way too much influence in America these days.

The dominant theme of the last three or four weeks of news in the United State has been the debate over when the country should open back up from the various Coronavirus lockdowns. The debate hasn’t really gotten anywhere, because both sides have something to be upset about. On the one hand, the virus definitely isn’t under control yet. On the other, people are also vaguely aware that staying unemployed indefinitely is probably a bad idea.


As is normal for big news items these days, the Democrats and the media soon found themselves shuffling over to whatever positions looked like suitable high ground from which to cast aspersions on President Trump. (If you had looked at our politics ten years ago, you never would have guessed that “Russian asset” would be the Democrats’ preferred insult, not only for Republicans, but also for each other. But I digress).

So naturally, the media are going to have a heyday with presidential statements like this one:

“A couple of years,” may be an exaggeration, but if you look on the internet you can find plenty of opinion pieces by doctors arguing that the shutdown needs to remain in place until at least the end of 2020. It’s usually presented as a ‘needs to’ thing, without any discussion of costs versus benefits. (Hint: Anytime that one side of a debate acknowledges the existence of trade-offs, and the other side just says, ‘we must do such and such,’ you’re generally better off listening to the first side).

Back to Trump’s tirade. If you are a (wealthy) Democrat, the meaning is obvious: Donald Trump is an ignorant buffoon with little respect for the expertise of people who have spent decades studying and practicing medicine, and little concern for protecting human life.

But what’s also quite obvious is that Donald Trump didn’t appeal to wealthy Democrats in order to win his election. The new waves of voters that he brought into the Republican party were mostly poor and middle-class workers who were struggling to get by and had come to see that, despite all its social justice cant, the Democratic party didn’t really care about them.

In short, they voted for Trump because they were fed up with the Anetocracy. (If you haven’t heard of that word, it’s because I just invented it. It comes from the Greek ‘anetos,’ meaning ‘comfort.’ I define it as the rule of the comfortable classes).

Who are the comfortable classes? Well, they’re the people who can work from home, or, if they can’t, are at least wealthy enough to go without a paycheck for a few months. They’re the people who don’t have to worry about much beyond what to watch on Netflix and whence to order takeout.

(Note: My entire family is part of the comfortable classes. Thought I am not wealthy, I have wealthy parents. So even though I’m not happy about having to come home from university and give up my job tutoring high school kids in physics, I do not have to worry about what I am going to eat or where I am going to live).

Doctors, obviously, are riding high on the hog and have little to lose from a protracted shutdown. So are nearly all journalists, which explains the bent of the news media (as if their hatred of Donald Trump and his voters wasn’t explanation enough).

What about all the Trump voters who want things to reopen? Do they simply not care about the people who will die if they get their happens?

Well, let’s put things in perspective: the Coronavirus kills about 0.67 percent of the people who get it. (Though you can’t get that figure from dividing number of deaths by number of confirmed cases since most cases are too mild to be reported). If it ran unopposed through the United States and infected 60 percent of the population, we would be looking at about 1.3 million people dying, most but not all of whom would have already been old and sick.

To put that in perspective, in a typical year the US loses 2.8 million people, most of them old and sick.

Obviously, a 45 percent boost to the annual death rate a bad thing. Which is why a shutdown of two or three months, followed by a cautious reopening once the virus is on the decline, is worth attempting – after all, it worked in China.

But try extending that rational to a yearlong economic freeze. ‘Still worth it,’ is the instant verdict of a great many Democrats, like Governor Cuomo, famous for his insistence that he would shut down all of New York to save just one life.

And if you can’t pay rent, you soon don’t have a place to live. Also, for obvious reasons, people who go a long time without finding a job are more likely to die by suicide or overdose.

These aren’t matters that a responsible government can neglect. There is a reason why life expectancy in America has been going down since 2014. And triggering a repeat of the great depression will make life for the working poor even harder than it already is.

There is a segment of American society that will suffer nothing worse than boredom from an extended Coronavirus shutdown, and many of these people are more than willing to pat themselves on the back for doing their part to save the planet. But not everybody is a part of the comfortable classes, and we shouldn’t act as if there  is only one perspective that matters.

In other words, our best option is to reject Anetocracy and listen to the guy who won the White House on a promise to stand up for the forgotten man. 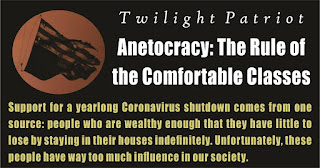