A large portion of the American punditry still insists, in the teeth of the evidence, that a party that chooses a boring enough candidate in the primaries will be at an advantage in November. There's only one problem: candidates who run on the argument that they’re electable have a history of losing elections.

At the moment I am writing this, it’s morning on Super Tuesday. Pete Buttigieg and Amy Klobuchar just dropped out of the race, leaving Joe Biden, who just won big in South Carolina, solidly in command of the establishment side of the field. (Unless you count Michael Bloomberg as establishment, which most people don’t).


Now, it’s a race between Sanders and Biden, who are both polling well over the 15 percent threshold and will win delegates in every state tonight, and Warren and Bloomberg, who probably won’t.

Outside of the delusional dreams of Michael Bloomberg, or the 10 to 15% chance that either Sanders or Biden dies of the Coronavirus (they are both septuagenarians, after all) the possibility of a brokered convention is dead in the water.

A lot of Democratic pundits, meanwhile, are celebrating Buttigieg and Klobuchar’s decision to scram and make way for Biden. Just look at some of their tweets:

The Washington Post: Moderate Democrats are doing what Republicans refused to do in 2016 – getting out of the way.

Brad Bauman: Presidential candidates dropping out over the past few days shows that Democrats fully understand the mistakes Republicans made in 2016, and we truly are the party of adults.

And it goes on and on.

What those pundits never seem to get around to explaining is why it’s so crucial for Democrats to avoid making the ‘mistakes’ the Republicans made in 2016. It’s as if these people had followed news coverage of the last election right up until the night of 7 Nov, hearing nearly every media outlet in the country talk about how the Republican Party had committed suicide by nominating Donald Trump, and then never bothered to watch the next day’s news and find out who actually won.

Instead, they are acting as if the 2016 election never happened, and insisting that it’s still a good idea to choose a nominee on the basis of electability.

Electability, to put it bluntly, is the quality that a politician claims to have when he lacks charisma, ideological purity, meaningful policy proposals, a unique vision for the country’s future, or any other asset that might win over voters.

The crassest example of the appeal to electability is the campaign of Michael Bloomberg. Bloomberg’s thesis is that his history of corruption, flip-flopping, enacting policies that most Democrats consider racist, and actually being a Republican at the beginning of his mayorship doesn’t really matter, because Donald Trump is really awful,  so beating Trump is the one thing that does matter.

And why is Bloomberg in the best position to beat Trump? Because of his money. He can buy a lot of ads. Bloomberg isn’t at all popular with the Democratic base, but that doesn’t matter to him, because he expects them to once again swallow the tired old nonsense that to win over swing voters, you have pick somebody that your own side finds dull and uninspiring.

Except that this isn’t how it works in real life. Back in 2016, the Republicans picked a man who rallied the base and got his followers more excited to vote for him than they had been to vote for anyone else in their lives. Then, after winning the primary, he kept right on rallying his base until he won with a record turnout in November, having also persuaded millions of people who had never voted before that this time, they had a reason to make their voice heard.

Turnout is a big deal in elections. Just think about it: since the modern primary system was set up in the 1970s, there have been four years – 1988, 2000, 2008, and 2016 – in which neither party had an incumbent in the running. All four times, the party that turned out the most voters in the New Hampshire primary went on to win the White House in November.

You do not turn out huge numbers of voters by running a candidate who is corrupt, uninspiring, or lacking in meaningful policy proposals.

When I defined electability a few paragraphs earlier, I said it’s what candidates claim to have when nothing else about them appeals to the voters. I didn’t use the dictionary definition of the word – ‘able to be elected’ – because, when the chips are down, candidates who ran on electability generally don’t do that.

Almost nobody in the mainstream press thought that Donald Trump was electable. He got elected anyway. In 2008 and 2012, when the Republicans had to choose between a variety of ideologically interesting candidates and an uninspiring flip-flopper who was widely considered the most electable, they went with the electable moderate – McCain and Romney – and lost both times.

Yet, whenever Republicans seem to be on the verge of choosing someone too conservative for the media’s tastes, the pundits trot out the example of 1964 and insist that, if we don’t listen to them and prioritize electability over ideology, we’ll get another Barry Goldwater. Why do they expect us to overlook our recent experiences with McCain and Romney and instead only think about an election that took place more than half a century ago, and in which Lyndon Johnson had it clinched anyway with the huge sympathy vote from the assassination the previous year? They do that because if we looked at literally any other election between then and now, we would have to throw the media’s thesis out the window.

As I’ve explained before, the odds are against them either way. But if the Democrats pick Bernie Sanders, they will have a small but real chance of winning this thing. If they choose the electable Joe Biden – or the richer, flip-floppier, and even more electable Michael Bloomberg – then they are doomed to lose the election. 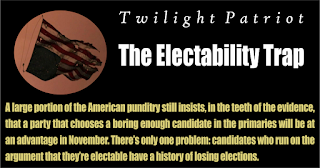