Some Thoughts on Super Tuesday

Joe Biden won big this week, and he will probably go on to be the Democratic nominee. So I put together a brief commentary on why this is happening, and what it means for the big picture.

Well, he did it. It looks like Joe Biden is on track to be the Democratic nominee. This is a comeback worth remembering. A week ago, there were seven or eight candidates in the running and Biden was near the bottom of the heap; now, it’s a two-man race between Biden and Sanders, with nearly everyone else having dropped out and endorsed Biden. We can speculate about what kind of arm-twisting was required to get such a fractious field to fall in line so quickly, but the upshot is that the Democrats have all but settled on their nominee.


Mike Bloomberg’s quick exit surprised me. Remember, this is a man who just spent half a billion dollars chasing his mad dream that Democrats would turn out in force to vote for a former Republican who insisted that his money made him the only man who could take on President Trump. I thought that someone who believed such a thing would surely hang on until the bitter end. I was wrong; Bloomberg dropped out and endorsed Biden within a few hours of being trounced on Super Tuesday.

That leaves the prediction I made three weeks ago – that Biden had no way to the nomination that didn’t go through a brokered convention – looking rather silly. It will now join my insistence, last October, that Boris Johnson would fail to get Brexit passed in whatever place failed internet predictions go these days.

For pragmatic reasons, I’m happy to see Biden back in the lead. He’s well past his intellectual prime, has a history of plagiarism and graft, and even in his own party very few people are excited to vote for him. If he gets the nomination, it will almost certainly mean four more years of Trump, because the sacred cow of the moderate wings of both parties – the idea that the way to win over swing voters is to pick a boring enough candidate – is total nonsense.

Nevertheless, if I had to choose the next President from among the two remaining Democrat, I would go with Bernie Sanders. Think about it this way: Sanders is dovish on foreign policy, he always has been, and he’s a staunch ideologue whose positions are hard to sway. Thus, he is unlikely to get the United States into any new conflicts. Joe Biden lacks ideological commitments to much of anything, he's no longer mentally present all the time, and if he wins the White House, he’ll spend four years surrounded by advisers hankering for the next war. Do you see what could go wrong here?

And yet a lot of conservative pundits are celebrating the fact that so many Democrats, by voting against Sanders, are rejecting “Socialism.” I have explained before why I think this is a meaningless label.

Nevertheless, there is a certain worldview, prevalent among American conservatives, that flattens the great conflicts of the world into a binary struggle between Capitalism and Socialism and then naively accepts the claims of people like Joe Biden and Elizabeth Warren when they say they’re opposed to the latter.

I recall just yesterday hearing Ben Shapiro wax hysterical about how deluded all those young Democrats must be to support a socialist, and how the country he knows and loves is on the verge of being gone within a year should Sanders become president.

This is the same Ben Shapiro, mind you, who deplores nearly every expansion of federal power over the last century, talks at length about how America’s moral foundations have rotted out, and shares the standard conservative view that abortion is a horrific injustice and that the 62-million body count since legalization ought not to be ignored. Surely he knows that both Biden and Sanders are in favor of expansive federal powers and government-funded-abortion.

And yet the thing we need to worry the most about – the thing that would signify that the country that we've cherished since 1776 is really, truly lost – is if we elect a President who doesn’t pay lip service to the free market.

Give me a break. The struggle between capitalism and socialism is the wrong lens through which to view the events of our time. “Socialism” is just a word that Bernie Sanders picked up to get the mob excited about faster-than-usual change. And if “capitalism” is what you call the status quo in this country, then I would never in a thousand years identify myself as a capitalist.

I think that this whole fixation on the socialist/capitalist divide is a manifestation of a habit of lazy thought that prevails among today’s intelligentsia, in which the thinker mentally sorts everything and puts it into either the good bin or the bad bin, and then says good things about the stuff in the good bin, and bad things about the stuff in the bad bin, and doesn’t worry himself about whether what he is saying makes sense.

One example of this is when conservatives claim that Sanders’ impending defeat in the primaries is a victory for the cause of liberty, because capitalism is good and socialism is bad.

Another example occurred a few days ago when The Federalist ran an article entitled “Yes, A Border Wall Will Help Contain The Coronavirus.”

When that article was published, there were 122 cases of the Coronavirus in the United States, and five in Mexico. The journalist who wrote that article isn’t saying what he said because it has any connection with reality. He’s saying it because, about four years ago, the conservative movement decided that the wall is a good thing, and now it’s his job to say good things about the wall.

The fact that people are trying to stuff the Coronavirus into so many dumb political molds is another good sign of just how far gone America’s intellectual tradition is these days. About a century ago, the Spanish Flu, which was much worse than the Coronavirus, killed well over a million Americans, most of them young and healthy. But people back then had the decency to not drag Woodrow Wilson through the mud over something that was quite a ways out of the President’s control.

Now, Democrats are champing at the bit for opportunities to blame the Trump Administration every time things take a turn for the worse. Meanwhile the right is choc full of people who insist that the virus started out as a bioweapon (in reality, it probably started out with somebody eating a bat) or that it only spread out from that Wuhan varmint market because China, being a communist country, doesn’t care about its citizens’ health (in reality, China is doing a much better job of containing the virus than either Europe or the United States).

You can expect the media to tell us to panic when a half-dozen or so members of Congress die of the Coronavirus, and expect us to overlook the fact that they’ll have only died of it because they’re so old, and Senators and Representatives die of old age all the time without throwing the government into chaos.

Meanwhile, since all the men still vying for the Presidency – Trump, Biden, and Sanders – are in their 70s, and they spend enough time in crowds that they’re bound to get the virus sooner or later, there’s about a 22 percent chance that at least one of them will die of it this summer. (The case fatality rate for that age group is 8 percent.)

That means we might be looking at a President Pence running for re-election in November, or the Democratic superdelegates scrambling for a nominee at the last moment when they realize the one they’ve got is no longer breathing. But we probably won’t.

And that’s the way that predicting the future works. The most mundane outcome – the one that doesn’t upset any trends – is the one that’s most likely to happen, but it isn’t the only one that could happen. So if Joe Biden maintains his lead long enough to win the nomination, nobody will ever again say that you have to come in first or second in New Hampshire in order to win. And if, heaven forbid, he defeats Trump in November, then he’ll break the record for America’s oldest president on the very day he takes the oath of office. 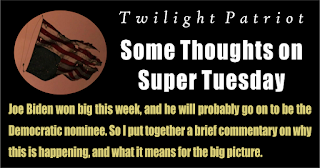