Some countries in the world today have experienced major disasters within living memory. Others haven’t. And the nations that have gone the longest since their last disturbance are usually the ones that will handle the next one the most ineptly.

I first mentioned the Wuhan Coronavirus on this blog on the last day of January. After a brief overview of the fatality statistics, I concluded that even in a worst-case scenario where most people in the world get infected, the virus would kill fewer people, in every age-group, than die in a normal year from heart disease, cancer, and all the usual causes of death.


If, on the other hand, the virus did what most new viruses do, and evolved milder symptoms so as to spread more easily, then the epidemic might drop out of the news just like the Swine Flu did. Therefore, I said, there was no chance of a serious disruption to the functioning of our global civilization.

As it turns out, the virus didn’t become less deadly, and the case fatality rate is still around two percent. Nevertheless, I think my original claim still holds: it won’t be the end of civilization as we know it, nor will 2020 mark some major turning point in the books of future historians.

But I have a confession to make. At the time I wrote that post, I hadn’t thought at all about the economic effects of the coronavirus – or, more precisely, the economic effects of the measures to contain the coronavirus. The upshot is that all this social distancing and isolation is going to leave us with a brutal recession, probably on level with what happened in 2008.

Will that crash the global economy? No – after all, people managed to pick themselves up and keep going after 2008. But it’s going to be a rough year or two, especially for the United States.

Why is America so likely to handle this worse than most countries do? Ask an American liberal, and you’ll likely hear that it’s because Donald Trump is such an egotistical ass. But that’s nowhere near the full story. While Trump’s handling of the crisis has been far from ideal, I’m not convinced that Obama or Bush Jr. would have done any better.

The real answer is, I think, more mundane, but also more revealing. America is handling this badly because we’ve had such a long run of peace and prosperity compared to the rest of the world. Basically, we’ve forgotten how to deal with hard times.

This ‘time since hardship’ variable has been at play in American life long before we heard anything at all about the scary new virus that had suddenly appeared in bat-eating Wuhan.

For instance, just ask yourself why America consumes so much more petroleum, per capita, than nearly any other country. To compare: China consumes 3.5 barrels per person per year, Russia 8, Britain and France 9 each, and Germany and Japan 11. For the United States, that number is 22.

Because oil isn’t a renewable resource – and because America’s days of being able to consume a quarter of the world’s oil are numbered – this isn’t going to end well for us. So why do we keep doing it? Since I’m not going to hop on the liberal bandwagon and say that America was founded on oppression and has a unique moral rottenness about it, I have to find an explanation somewhere else.

My explanation is that Americans are behaving the way they are for the simple reason that we have no living memory of hard times. We’re wasteful because peace and prosperity have made us wasteful.

In the first decade or so after the world was remade in 1945, the United States sat squarely on top of it. We had the best farmland, the biggest oil reserves, and the only industrial plant that hadn’t been bombed out during the war. This wealth let us build the interstate, cruise from coast to coast in our gas-guzzling automobiles, build really big houses, and eat lots of meat.

Meanwhile the Europeans and Japanese, having just lived through a decade of scarcity and having experienced war up-close, were much more frugal. Not everybody could afford a car, so they got around by rail, bus, and bicycle. They lived in smaller houses and ate more plants. When energy prices shot up in the 1970s, they responded by building nuclear reactors and bullet trains.

America’s energy policy, on the other hand, consists mainly of coups and invasions in petroleum-rich nations and massive trade deficits to fund the importation of oil, while at home the rail system is in total disrepair, and we live in cities built with the assumption that everybody will have a car. Sooner or later, this policy is going to blow up in our face. But most Americans don’t think about that, because it isn’t in the nature of someone who has only ever known prosperity to think about how fragile that prosperity really is.

Now consider how various countries handled the Wuhan Coronavirus. China, where it all started, is used to hardship. Many people still vividly remember the famines under Mao. The Chinese have little expectation of personal freedom. They’re used to being told when it’s time to give up their rights for the common good.

On the whole, China’s system of government is not worthy of imitation. But it was able to stop the Coronavirus. After the initial policy of coverup was abandoned and the people at the top started taking the crisis seriously, China sprang into high gear. Much of the nation is in lockdown, and huge numbers of people are being quarantined. The result is that the daily death rate declined from its peak of 150 in mid-February to 11 yesterday.

Now compare that to Italy. Italy experienced war and famine in the 1940s, which made the people cautious and frugal, for a while. But the memory of those events has grown dim.

As an example of this, in 2010, Italy’s state-owned television network fired an old chef for talking about his experience cooking and eating cats in his childhood during the war. A country doesn’t treat its elders this way unless the bulk of its people have lost touch with reality – namely, the reality that there are times when you have to choose between living differently than you normally do, or not staying alive at all.

Which is how Italy has managed to take China’s place and become the new center of the pandemic, with 345 deaths just yesterday. Last week, Italy finally woke up to the severity of what was going on, and ordered an end to all public meetings, and the closure of all schools and all shops except for grocery stores and pharmacies. Will these measures be as successful as China’s? Right now, nobody knows.

Then we get to the United States, a country which hasn’t dealt with war or famine on its own soil since 1865.

Even though he had plenty of advance warning about the Coronavirus, President Trump spent most of February talking about how the situation was totally under control and bragging about the stock market. “Because of all we’ve done,” he said less than three weeks ago, “the risk to the American people remains very low… you have 15 people, and the 15 within a couple of days is going to be down to close to zero. That’s a pretty good job we’ve done.”

By now there are over 6,000 known cases and 108 American deaths. The real case count is probably much higher than 6,000 simply because America, in its state of unpreparedness, has tested so few people. It wasn’t until the pandemic was declared on 11 March that Americans started acting like this was serious. I won’t bother listing the resulting cancelations and closures, because they’re already all over the news.

Meanwhile, Mitt Romney is saying that the government should give every American $1,000 immediately. Such a hand-out shouldn’t be necessary – in the old days, people had their families and their churches to help them through times like this, and in any case, if Romney’s plan did go through, most of the people who got the thousand dollars would squander it. But these days, the typical American no longer has the same kind of support structure that he or she used to have.

The plain fact is that we’re about to see a lot of people who work at restaurants, bars, gyms, schools, or similar places, and aren’t high enough on the ladder to get paid leave, who have no way to keep up on rent.

Whether or not the Romney plan ever goes through, the government will still be handing out a lot of free money. That’s what happens when the Federal Reserve cuts interest rates to zero. But can you or I go to the bank and get a zero-interest loan so that we don’t have to worry about paying the bills for the next few months? No, only wealthy corporations get to do that.

America’s exceptionally long run of peace and prosperity has made us inept at handling serious crises. We’ve forgotten how to live in hard times, but as history has shown again and again, hard times do not stay forgotten forever. 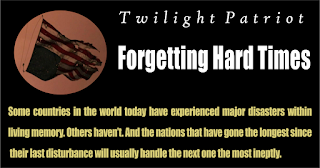