Modern America is by far the wealthiest nation on Earth. We can afford to shut down the economy for a few months and keep meeting our physical needs. But we can’t keep paying our debts, and in our system, the average person is required to be deeply in debt.

Yesterday, 601 Italians died of the Coronavirus. The day before, the death toll was 651, and the day before that, it was 793. It appears that Italy has pulled off what China did a month earlier, and reversed the growth of the virus by means of a very strict shutdown, with all shops closed except for grocery stores and pharmacies.


Right now, the United States is in a similar situation to Italy. Our death rate hasn’t peaked yet, but if we keep doing what Italy’s doing, we can expect the same overall result.

But now, Donald Trump is talking about how he wants the shutdown to end after 15 days. Trump can’t end it himself – at least not nationwide, because the “shutdown” is really a patchwork of emergency measures imposed by states, cities, and counties – but if enough people followed his lead and lifted said measures, we could expect the virus to start spreading again just as if a red traffic light had changed back to green.

Everyone knows we can’t keep the shutdown going forever, but when it was first imposed, the idea was to slow down the virus until somebody developed a vaccine or cure, or until it evolved into a less deadly form, or at least until America’s hospitals had the resources to properly treat millions of cases so that the fatality rate would only be one percent instead or two or three percent. A 15-day shutdown, followed by business as usual, is actually pretty useless.

And yet with the need for a $6 trillion (!) bailout looming on the horizon, letting the virus have free reign is looking more and more appealing to the President and his advisers. The alternative – having to come up with a way to recover from the loss of a third of our annual GDP – is something that politicians in both parties would much rather not do.

And yet, it shouldn’t really be a problem if our economic output in 2020 turns out to be only two-thirds of what it was last year. After all, the per-capita GDPs of both Britain and France are a little less than two-thirds of ours, and those nations aren’t living in poverty.

But the problem isn’t that we can’t shut down the economy for a few months and still meet our needs. It’s that we can't shut it down and still pay our debts.

Most Americans are living on the edge of insolvency. They have little savings and lots of debt. If their paychecks don’t come in each fortnight, they will soon have no food and no place to live.

Businesses are the same way. The reason that the government can’t respond to the rent crunch in the obvious way – by suspending the obligation to pay rent until the crisis is past – is that landlords usually have to pay the mortgage every month. Other kinds of businesses also have obligations that aren’t going away.

The easy thing to do, when looking at a situation like this, is to blame ordinary Americans. “If they weren’t so lazy and irresponsible,” you could say, “they wouldn’t be in so much debt.”

But that isn’t really accurate. Americans in the 1950s and 1960s were much thriftier than they are today, but most were still in debt. In fact, since 1933, our country’s monetary system has been set up to make it impossible for the average person to not be in debt.

To get a grasp of the concept of the debt economy, consider the following scenario:

Suppose that one hundred people are living at peace in a simple, agrarian village. Some of them are farmers, some are shepherds, some grow grapes and olives, some make and mend clothing, and so forth. One day, a one-hundred-and-first man arrives in the village, and introduces the other villagers to the concept of money. They all decide that they like the idea, and would be happy to give up bartering and instead have a single resource that can be traded for anything else. Thus, they agree to make this man their banker, with sole authority to issue money in their village.

The newest villager fashions a wood-block press, brews a pot of ink, skins some sheep to make parchment, and prints 10,000 paper marks. But he doesn’t just give them away; instead, like any good banker, he lends them out on credit. Each villager borrows 100 marks at ten percent interest. They begin using them in commerce with one another, and everyone is pleased with the new invention.

Most of the villagers feel like it would be a good idea to get out of debt. Some, by a combination of hard work, skilful trading, and luck, finish the year with more than 110 marks to their name, and pay off both the principal and the interest. Most don’t, and they only pay the 10 marks of accrued interest.

Now, there is a problem in the village: the amount of money that the villagers owe to the banker is greater than the amount that exists. The whole village can never pay its way out of debt. Some individuals may win back their freedom, but only by selling their goods and services to others who remain indebted. If the majority of the people are lazy, then an individual can get out of debt by working hard. But if the majority works hard, then hard work alone won’t be enough; one will also need superior talent or luck. Most people will never escape.

From time to time, the banker lends more money to the struggling villagers. This allows them to get by without the economy grinding to a halt, but it doesn’t bring them any closer to freedom.

Is the money that these villagers use worthless, because it is made of paper? Not at all. In fact, the villagers always want more money than they have, and many of them, who were once scrupulously honest, have found that they are now willing to lie and steal in order to get the stuff. After all, even the villagers who don’t care about living luxuriously still need increasingly large sums of money just to service their debt.

In the real world, simple, agrarian societies don’t do this kind of thing. They use commodity money: gold, silver, wampum, cocoa beans, or some other physical good that doesn’t have to be borrowed into existence.

That doesn’t mean that some people won’t choose to borrow money anyway. Indeed, many societies with commodity money, such as the United States prior to 1933, have had banks and even central banking. But the ultimate creators of money were gold and silver miners, not banks, and banks had to pay interest on their specie reserves as well as collecting interest on their loans. Participation in the debt economy was optional.

Then, in 1933, the New Deal government made Federal Reserve notes the only kind of money that common citizens could legally own, and participation in the debt economy became mandatory.

In modern America, the Federal Reserve fills the role of the banker in my story. It doesn’t lend to you and me directly (two percent interest rates, after all, are not for the Plebs) but it lends to other banks, and those banks lend to you and me. There is always more debt in the economy than there is money, and most people, just like most businesses, will never pay off their debts. 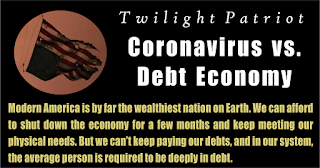