We can kill them wherever we find them; there is no such thing as neutral soil. It doesn’t matter if our target showed up in Baghdad to meet with the head of government in a nation that we’re supposedly allied with. In fact, it doesn’t even matter that most of the anti-ISIS coalition – the Iraqis, the Syrians, the Russians, the Kurds, etc. – considered General Soleimani and his Quds force to be valuable allies.

This is not going to end well for the nation that has set itself up as the world's overlord. Blindness to the rights and interests of other countries is a good way to isolate oneself and turn allies into foes, while adversaries who were once hostile toward one another are driven into each other's arms.
Russia has bad relations with China for most of the two countries’ history, but over the last two decades, American imperialism has driven them into close friendship. Iraq and Iran have experienced much the same thing.

Now I am sure that some of you, after reading all this, will be thinking about what an anti-American screed I have just written, and wondering how someone who calls himself a “patriot” could reveal his true colors as a terrorism apologist. Why doesn’t this man care that American lives were lost?

People who know the Middle East fairly well – like General Mattis, under whose watch the present events could never have happened – understand that neither the Sunni-Shi’a conflict, nor any of the other ancient and venerable ethno-religious  rivalries that divide the Middle East, has clear good guys or bad guys. If we choose to engage in proxy wars where that rivalry is at issue, then we’re looking at morally dubious ground as far as the eye can see.

One man’s terrorist is another man’s freedom fighter, and one man’s warmonger is another’s liberator. And one of the details of Soleimani’s death that you won’t hear on American news is that, the Sunday after he was killed, Christians in churches across Syria held masses in honour of the martyrdom of the man who saved them from being exterminated by ISIS.

Because that’s the kind of thing that happens in a world with more than one sovereign nation. And I sure hope that it’s what will happen now, once tempers have cooled – after all, it is much better than the alternative. 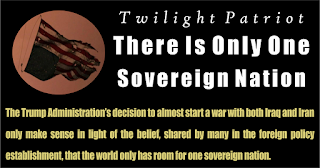