Oppression at Home and Liberty Abroad?

Conservatives love to talk about government overreach and the myriad ways that the regime in Washington is violating our constitutional rights. But if our policies are bad for human rights here in America, then why assume that the regime is a force for good everywhere else in the world?

The airstrike that killed Iranian Major General Qasem Soleimani and brought the United States to the brink of war is now two weeks in the past, most of the shouting has died down, and it now looks like my initial prediction was right after all: namely, that America would continued to avoid war with Iran.


It wasn’t easy: nothing riles up the Iranians like a good martyrdom, and when the martyr was so revered that sixty people got trampled to death in the funeral procession, Iran’s leaders were constrained to do something to preserve their national honor. So they launched a wave of ballistic missiles at two American bases in Iraq, and told the Iranian people that eighty Americans had been killed.

In reality, nobody was killed, as the missiles were carefully targeted to strike empty buildings. But America got the message – we can destroy your bases, if you keep pushing us – and Donald Trump chose not to escalate things any further. Meanwhile, most of America’s NATO allies are now withdrawing their troops from Iraq, with only the United Kingdom standing by the United States’ decision to blatantly violate Iraqi sovereignty.

While the Iraqi government itself will probably prove too pusillanimous to enforce its own resolution and expel the remaining foreign troops, the loosely organized Shi’a militias that make up the majority of Iraq’s armed forces are not so patient. They will muster their troops for battle, and methinks that the occupation force’s days are numbered.

Overall, this looks like a clear strategic win for Iran. It is an old principle of military scheming, going back at least to Sun Tzu, that to fracture the enemy’s alliances is better than a direct attack. And after what has happened in the Middle East over the past two weeks, America has very few allies left.

But now that the dust has settled, and most Americans have gone back to watching the Senate prepare to acquit Donald Trump, we are left with an important question: where were the constitutionalists when this happened?

I’m talking about the large faction of the Republican party which likes to complain about federal overreach, usurpation of the powers of Congress by other branches of government, and general violations of the constitutional limits that the Founders tried to set for the government they organized.

Just consider the case of Ted Cruz and Marco Rubio, who ran for president four years ago on a bunch of pompous rhetoric about restoring the constitutional balance of power, but who now led the Senate in passing a resolution praising Donald Trump for his unilateral act of war.

Apart from Ron Paul, Tucker Carlson, and a few other dissidents, most of those who pass for small government conservatives today have no major disagreements with the present foreign policy, based, as it is, on neoconservatism, the Bush Doctrine of preventive war, and the unwritten axiom that the world has room for only one sovereign nation.

When you really think about it, this is a strange paradigm through which to see the events of our day.

On the domestic front, the typical right-winger sees a government which is too large, which exerts too much control over its people, whose policies are beholden to a variety of monied interest groups, and which shows a crass disregard for innocent life (for instance, by funding abortion).

But abroad, the United States is an unalloyed force for good. We are on the right side of every conflict we enter. Our wars, declared or otherwise, are always legal and just. Our soldiers are always liberators. Our enemies are always terrorists. Monied interests, like the arms industry and the oil industry, are never a factor. And civilian casualties are never numerous enough to lead us to question the justice of our cause.

In short, there is a particular worldview, prevalent on the American right, in which, here at home, the United States has spent nearly a century sliding away from its founding principles and destroying the liberties of its own citizens, while remaining a great defender of human rights abroad.

Then there is the level-headed view of people like Ron Paul, in which a government that acknowledges no constitutional limits will wreak havoc both at home and abroad. But that view represents only a small minority of the Republican party.

Now I want to make myself clear: just because I say that the last two decades of US involvement in the Middle East have been a disaster for human rights does not mean that I lionize Iran.

But I do believe in Iraq’s right, as a sovereign nation, to say yes or no to foreign military activities within its territory. And I think that the fact that most members of the anti-ISIS coalition considered Iran to be a valuable ally, which they could work with peacefully, means that the United States could probably have done the same. And I reject any claim that our bombing campaigns in Syria, Libya, and Yemen have led to any increase in those countries’ freedom commensurate with the human cost.

And I think that the demand for oil is a major driving force in all American involvement in the Middle East. How else do you explain how the usual indignation towards the “terrorists” is suspended when Saudi Arabia is involved? It’s hard not to admit that the people who killed a dissident journalist in Turkey and hid the body in the Saudi consulate had done more than enough to get themselves designated as terrorists and blown to smithereens in a drone strike, if they had been working for any other country.

And yet the United States still sells billions of dollars worth of armaments to Saudi Arabia every year.

Most American conservatives, while they are good at pointing out domestic violations of our inalienable rights, have refused to see all this.

Such cognitive dissonance isn’t born of rational thought; rather, it’s a tribal thing. If you’re a conservative in this country, then you probably identify as an American and a Republican. As a Republican, you look at all the ways that your rivals, the Democrats, have expanded the power of government over the past century, and you see rampant violations of various constitutional rights. But as an American, you look at the US armed forces, wherever in the world they may be, and whatever they may be doing, as liberating heroes.

By saying that this is tribal thinking, I don’t mean to imply that it’s confined to the unsophisticated masses. Just look at William J. Bennett, the man who served as Ronald Reagan’s Secretary of Education, and later wrote the US history textbook that I used in high school.

The text has two volumes: the first runs from colonial times to about 1913, and the second from World War I to the end of the Reagan Administration. The founders and the constitution they wrote are praised effusively. Abraham Lincoln is praised for saving the Union and abolishing slavery. Franklin Roosevelt is criticized for the New Deal, but praised for his leadership during World War II.

The man who comes in for the most criticism is Jimmy Carter: the chapter about him is titled “The Years The Locusts Ate,” and is all about how his weak leadership allowed Americas enemies, especially Iran, to win victories all over the world. (Nothing at all is said about the CIA-backed coup in 1953 that made the Iranian people hostile toward America in the first place.)

The man who comes in for the most praise is Ronald Reagan. His military adventurism is presented in a purely positive light. All the talk about the separation of powers from Volume 1 is conveniently absent. When the Russians shot down an airliner full of Americans and Koreans in 1983, Bennet waxes eloquent about what a tragedy it was. (When the Americans did the same thing to an Iranian airliner in 1988, it got no mention at all.) Finally, the whole book concludes with a speech by Reagan about how America is the “Shining City on a Hill” which the whole world should aspire to be like.

Oh, did I mention that, according to Bennett, this all happened while the US government was contributing to the deaths of several tens of millions of innocent people? That started in 1973 – Bennett takes the usual conservative position that abortion is murder, and quotes Byron White’s dissent from Roe v. Wade about “Raw Judicial Power” and how outrageously awful it is for the rights of so many people to be abolished in such a blatantly undemocratic manner.

You may or may not agree with Bennett’s take on abortion rights, but either way, doesn’t it seem a bit strange that a man can accuse his own government of mass murder, and then a few pages later go back to talking about how great and how free America is? Seldom does he question his country's status as the prime force for good in the world. ‘Right to life or no right to life,’ he seems to be saying, ‘we’re still the Shining City on a Hill.’

When Bennett wrote a slim third volume to bring the history up to 2009, he managed to work in justifications for both the first and second Gulf Wars, even though everybody knew by then that the Iraqi nuclear program had never existed. Go figure.

Even Matt Walsh, one of the few conservative bloggers that I actually take seriously enough to follow these days, can’t seem to see that there’s more to the situation in the Middle East than Fox News might be letting on.

Here’s the headline for his sole post discussing the death of Soleimani: Trump Just Killed One Of The Most Dangerous Terrorists In The World, And Democrats Are Upset About It.

Needless to say, he doesn’t spare any time discussing the intricacies of what actually happened and why. After one brief tirade, Walsh returned to his usual focus on domestic issues. His next piece was headlined: Michelle Williams Shouted Her Abortion At The Golden Globes. Here's The Most Disturbing Part Of What She Said.

So how in the world does this man look at the wars going on in the Middle East and see a black-and-white situation in which the United States somehow occupies the “white” position?

It doesn’t make a lot of sense. But then again, patriotic feelings are seldom governed by logic. People have deeply ingrained emotional ties to a concept of “the Land of the Free and the Home of the Brave” that has long since become untethered from the reality.

Chances are that if you’re reading this, then you are an old-fashioned constitutionalist who believes that the federal government is way more powerful than it was ever intended to be, that most policy coming out of Washington serves monied interests rather than the common people, and that any society that celebrates abortion the way ours does is a very selfish society with little regard for human rights.

And if you believe all that, then I think it’s time to admit that our foreign policy isn’t driven by a desire to protect the innocent, either. 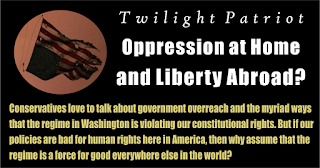