How To Think About The Coronavirus

Some people in the media want you to panic about the Coronavirus. Others want you to blame the Chinese government and reassure yourself that such a disease could never take hold here in America. But when you think about recent events in terms of the actual history and science of viral outbreaks, you’ll see a different picture.

Two days ago, on 30 January, the World Health Organization (WHO) declared an international emergency on account of the ongoing Coronavirus outbreak in Wuhan, China. But judging by the headlines, you might have thought it was an emergency much sooner – and perhaps not just any emergency, but the next Spanish Flu. Different motives are at work here: the WHO is concerned about false alarms; the news media, as usual, just sounds the alarm all the time.


But now that everyone is on the same page about this being a big deal, I think it’s a good time to look at the facts dispassionately, with an eye on the history of how similar viral outbreaks have unfolded in the past, and paying due heed to the fact that, most but not all of the time, this year’s events wont be any more dramatic than last year’s.

To begin with: Coronavirus definitely won’t be anywhere close to as bad as the Spanish Flu. The Spanish Flu pandemic that spread around the world in 1918 and 1919 killed between ten and twenty percent of the people who got it. The Wuhan Coronavirus kills about two percent. Also, unlike the Spanish Flu (but like most infectious diseases) Coronavirus mainly kills old people – right now, the median age of victims appears to be 75. So while it has the potential to be the worst disease outbreak of my lifetime, it won’t come anywhere close to disrupting the course of global civilization.

From the virus’ point of view, killing the patient is not the ideal outcome. Natural selection optimizes for viruses that can coexist with the population they infect. Mild diseases like the common cold are the norm; deadly outbreaks generally occur when a pathogen optimized to infect some animal species makes the jump to infecting human beings (for which it isn’t optimized) and starts killing them.

Once the outbreak is in the news and everyone is talking about it, one of two things will usually occur. Either:

1)  The disease never gets good at spreading between humans, and despite some initial success it is eventually contained, as in Bird Flue, SARS, or Ebola, or

2)   It evolves to spread well between humans, and in the process becomes much less deadly, as with Swine Flu, which was hyped up as the next great pandemic when it appeared in 2009, but turned out to be less likely to kill you than the ordinary flu.

The natural host of the Coronavirus was probably a bat, because:

1)  The closely-related SARS virus, which killed 774 people during its outbreak in 2002 and 2003, is harboured by the Chinese Horseshoe Bat.

2)  Do you know anything about bats? They’re nasty. In addition to SARS, they’re also the source of hantavirus, Nipah virus, rabies, Marburg, and Ebola. No wonder the Book of Leviticus says that you’re not supposed to eat them.

Chinese officials have traced this year’s Coronavirus outbreak to the Huanan Seafood Wholesale Market, a grand outdoor mall where more than a thousand tenants sell both live and dead fish, chickens, pheasants, bats, marmots, venomous snakes, spotted deer, and every other kind of bushmeat. Whether the first human patients got the disease from a bat, or from some other animal that had been bitten by a bat, is anybody’s guess.

At present, about 250 people have died out of 12,000 confirmed cases, putting the maximum case fatality rate at some two or three percent. I say maximum because the milder a case of Coronavirus is, the less likely it is to be reported to the authorities, so nobody really knows the true case count, but the higher that number, the less dangerous the disease.

Coronavirus spreads very well among people; estimates of the infectivity rate range between 1.4 and 4.0. Doctors would have to get this below 1.0 to contain the epidemic, something which is looking increasingly unlikely: despite the quarantine on Wuhan, Coronavirus has by now been reported in every province of China and in 25 foreign countries.

So Coronavirus is probably going global. (Don’t listen to the people who say that Americans don’t need to worry because the whole thing is a result of China’s communism and backwardness – do you think that America is capable of responding to a disease outbreak by quarantining 11 million people? Neither do I.)

Also, the fatality rate is 2 percent. If it infects a third of the US population (which is what the Spanish Flu did) then we’re looking at 2 million dead. Not good.

But there are some major mitigating factors. One of the reasons that the Spanish Flu was so awful is that it killed mainly young adults. With Coronavirus, on the other hand, you are very unlikely to die of it if you were young and healthy to begin with.

When the Observer got a hold of profile data for 47 early fatalities, it turned out that only five of them were people under the age of 60 who didn’t already have a severe health problem. Of those, one was 36 and the other four were in their fifties. In other words, a demographic that makes up more than two thirds of the Chinese population accounts for only 11 percent of Coronavirus deaths. So for a relatively healthy person under age 60, the case fatality rate can’t be more than 0.3%. For someone under 45 or so, it’s an order of magnitude smaller.

Now, if this disease sweeps the United States, we’ll end up with nearly 2 million old people dying a few years sooner than they otherwise would have (along with the 2.5 million who die in a normal year), and then another 200,000 or so deaths among the young and middle-aged.

For comparison, the US loses about 500,000 people under age 60 in a typical year, mainly to cancer, though suicide, homicide, and car wrecks together make up about 15 percent of this number.

This is about the worst that could happen, though I still consider it rather unlikely, for the following reason: Right now, the fatality rate from Coronavirus is much higher in Wuhan than elsewhere in the province of Hubei, and higher in Hubei than elsewhere in China (5.5 percent to 1 percent to 0.3 percent). Outside of China, though 156 cases have been detected, nobody has yet died.

From this it seems that Coronavirus is following the second of the two likely outcomes I sketched out above – that is, after having found itself in a new host, it is yielding to the pressures of natural selection and developing ways to avoid killing that host. The strains of the virus that spread the furthest are the ones whose symptoms are least severe.

Or in other words, a man flying from country to country without ever showing enough symptoms to know he’s sick is going to infect a lot more people than a man dying in a hospital bed in Wuhan. Hence, due to evolutionary pressure, we’re probably going to get a lot more of the first than of the second. 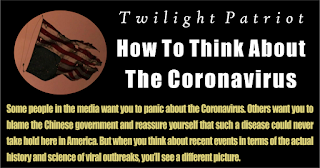