Then, on Sunday, 10 November – three weeks after the election – the police and the military turned against President Morales and demanded that he resign. That night, Morales, his vice president, and everyone else in the line of succession resigned their offices and fled the country, leaving Jeanine Áñez, the President of the Senate, to become Acting President. 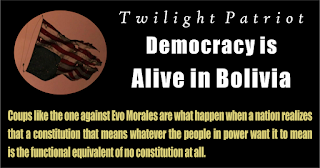