A fair examination of Russian affairs will reveal a human rights record that is, in most cases, better than that of the United States. So why does the American media use Russia as a blank screen on which to project its image of tyranny?

Recently, one of my readers contacted me to share his lengthy train of opinions about my blog and the topics it deals with. Mostly, these opinions were positive. He especially liked my use of the Blind Men and the Elephant as a metaphor for the civilizational decline that we’re currently in – a decline so broad and multifaceted that different observers can perceive totally different causes for it, and yet all be partly in the right.


But he had a major disagreement with me regarding my inclusion of Vladimir Putin in a list of people I admire in a post I wrote back in June. “I would not use the word ‘admire’ for Mr. Putin or people like him,” this reader said. “We can ‘understand’ how Russians feel, we can appreciate the skill of a Putin in playing to those feelings and accomplishing, to some extent, his goal of Russian national regeneration – without admiring him.  The same applies to other skillful politicians: Lenin, Hitler, Roosevelt.”

There’s just one problem with this reader’s characterization of the situation – I really do admire Vladimir Putin. I am aware of his country’s less-than-perfect human rights record, but even so, the Russian Federation is far from the autocratic caricature that Western media outlets have drawn. Indeed, I think that, in our times, Russia is a greater defender of human rights than United States. In any case, the Russia of today is certainly a vast improvement over what Putin inherited from Yeltsin back in 1999. Comparing Putin to Lenin and Hitler is very inaccurate. (And including a Roosevelt – either of them – in that list is downright ludicrous).

The event that prompted me to finally write this article was when the Drudge Report made a top headline story – and a bright red top headline at that – out of Russia’s test of RuNet, the all-Russian version of the internet designed to maintain Russia’s self-sufficiency in the face of the American-dominated global version.

Let’s imagine, for a moment, how the media would react in an alternate world where some country other than the United States – China, perhaps – controlled the global information lanes, and America decided to build an independent backup system out of China’s reach. Nobody would question the propriety of such a project. But when the country building a local internet is Russia – the blank screen onto which Americans project their visions of dictatorship – you’ll hear all about how Vladimir Putin is trying to stamp out freedom of speech and cut his people off from the rest of the world.

Just don’t stop to wonder why Vladimir Putin would need to do that.  He won last year’s election with 77 percent of the vote, and even in his closest election – in 2000 – he got nearly twice as many votes as his closest rival. In America, by contrast, the elections are nearly all squeakers, and the most recent one has featured the defeated party trying every gimmick it could think of to reverse the result.

Some Western pundits try to discredit Putin’s victories by attributing them to fraud, but everybody who’s been on the ground in Russia knows that the President is immensely popular. In any case, the intelligent observer should ask himself which situation is more likely to be influenced by fraud: Vladimir Putin walloping his opponents by two- and three-to-one margins, or what happened in Florida in 2000?

Then you have the people who compile democracy indices for publications like the Economist, who fault Russia because its President is too powerful. What they overlook is that the reason that President Putin can make whatever laws he wants is that his party, United Russia, has won huge majorities in the Duma over and over again.

In America, on the other hand, big changes in the law usually have nothing to do with who controls Congress. Just consider who was behind DACA, or the legalization of same-sex marriage. It isn’t your elected representatives who are writing the laws. Yet America still gets sky-high ratings from the Economist, because the neo-liberal intellectuals who write democracy indices don’t care whether elected officials are making a country’s laws or not, as long as they get laws that they like.

Russia also fights in a lot fewer foreign wars than the United States. Granted, when the Russians ally with someone like Bashar al-Assad in the fight against ISIS, the US media goes all in about how awful Assad is. But the Americans also fought on Assad’s side, except when we didn’t. And we fought for the Kurds, until we sold them out – basically, we’ve fought on nearly every side of this war. The Russians just picked a side and stuck with it until the Islamic State was stamped out, and they shed a lot less blood in the process.

Another bone of contention for Westerners is Russia’s invasion of the Crimea back in 2014; what most people never talk about is that the Russians only did this after the government of the Ukraine was overthrown in a CIA-backed coup. Also, the Crimea immediately joined the Russian Federation and is now represented in the Duma alongside all the other Russian constituencies. America, on the other hand, has held Puerto Rico for 121 years without giving it any representation in Congress.

Russia is nonetheless without its flaws, of which police brutality is a major one. It also has a worse-than-average incarceration rate, with 316 prisoners per 100,000 people. America, on the other hand, has 655 prisoners per 100,000, which is literally the highest incarceration rate in the world. A country doesn’t earn a distinction like that if all, or even most, of its prisoners actually deserve it. But with a combination of exorbitant sentences for nonviolent crimes, uncritical faith in the testimony of jailhouse snitches, and ignorant jurors who believe, more often than not, that it’s the defendant’s responsibility to prove his own innocence, America has managed the feat.

Also, in Russia, putting children on Ritalin and similar drugs is strictly illegal. If you were to take the Western media’s word for it, this is more evidence of how backwards the Russians are – i.e. they are ignorant of the prevalence of ADHD among children.

But the truth is that the Russians aren’t, nor have they ever been, ignorant of the fact that most children fidget and squirm in their seats, make careless mistakes on their schoolwork, and would rather be playing outside than sitting at a desk. In other words, children are more rambunctious and distractible than adults, and by definition, half of them are more so than the average child. The only difference is that the Russians have not chosen to categorize these things as a mental disorder.

The science behind child-drugging is sound: the symptoms of ADHD really do go away under medication; it is possible to make a child act less like a child by giving him a drug that suppresses his growth, makes him more aggressive and irritable, and dampens his desire to socialize with other children, play outside, climb trees, and do other things that healthy children do. And while the drugs work well for imposing conformity in America’s factory schools, research has failed to find any lasting academic benefits.

Also, drug dependency in childhood has been shown by neuroimaging to lead to permanent deficiencies in dopamine and GABA+, the same chemicals that the drug is boosting in the short term. So the upshot is that some ten to fifteen percent of the male population, plus a smaller number of girls, will grow into broken adults who suffer from depression, delusional thinking, and all sorts of mental illnesses, because some of their neurotransmitters are just missing.

In America, the authorities have decided that this is an acceptable tradeoff for a few years of improved behavior in grade school. But that is not the way that things are done in Holy Russia.

And I shouldn’t even need to get started on the advantages of living in a country where child custody disputes do not involve the question of whether the child should be raised as a boy or a girl.

Some people, after hearing about these kinds of things, like to console themselves by saying that, despite its shortcomings, the form of government that America’s founders gave us is still the best in the world. The trouble is, we are no longer operating under the government that the founders set up.

The founders didn’t create a Congress that had no say in how the laws are made. They didn’t give the President unilateral power to wage war. They didn’t give the Supreme Court power to amend the constitution. And they set up protections for defendants’ rights which, if followed, would have kept us from having the world’s highest incarceration rate.

And if the other human rights abuses that I just described were never factored in by the men who wrote the Constitution of 1787, it’s because the power of human beings to anticipate future madness only goes so far.

If we valued what the founders gave us, and shared their outlook on life, then we would respond to the refusal of our government to protect these inalienable rights in the same way that they did – by having a revolution.

But instead, most Americans have chosen to turn a blind eye to the evil going on in their own land, and instead project the shadow onto a nation and a man who have done far more to defend human rights than anyone on this side of the ocean. 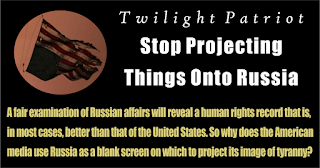