I Totally Called It On Brexit

In February of this year, I predicted that there would be no Brexit by the 29 March deadline. I was right. The next magic day was 31 October, which has proven equally uneventful. Now it’s time to think about how all this fits into the long arc of the rise and fall of British democracy.

Way back on February 27 of this year, less than a week after I started blogging at Twilight Patriot, I predicted that there would be no Brexit. This went against the conventional thinking on the matter: the British people had voted to leave the European Union, the May government had spent nearly two years negotiating the terms of departure, and the promise was that Britain would be out by 29 March.


In the three-years-and-change since the June 2016 referendum, the mainstream media and the alt-media have both put out a copious stream of thinkpieces expressing a dizzying array of opinions about the meaning and significance of Brexit. While these writers can’t agree on whether the outcome of the election was good or bad, they generally at least see it as something important, a sign of the ongoing populist revolt against the technocratic global elite.

Needless to say, my belief that the whole thing would end up proving to be no big deal didn’t get a lot of traction. But when Brexit day came and went, and came and went again, and is now coming and going the third time, I think that events have borne me out. Granted, the British government is, for the moment, maintaining the pretence that Brexit will happen – right now, the date is 31 January – but when Boris Johnson’s protestations that he would rather be “dead in a ditch” than delay Brexit past today (it now being 31 October) didn’t pan out, I don’t think it’s wise to assume that the future will be any different than the past.

In my post in February, I claimed that elections, across most of the western world, now have very little impact on public policy. This is actually even more true in the United States than it is in Britain. Just consider how useless all those referenda against same sex marriage turned out to be, or the fact that, shortly after their big win in the 2014 midterms, Republicans were treated to the legalization of several million illegal aliens in the DACA program, an action which President Trump, after riding into power on an outraged electorate, has been forbidden by the courts from reversing.

The reason that the elites get to ignore elections these days is that they can do so without facing civil unrest. If, in 1815, Federal Marshals had shown up in a small town in Kentucky in order to arrest the county clerk for refusing to marry same-sex couples, the Marshals would have gotten tarred and feathered, in an optimistic scenario. If, in 1816, Britain had voted to leave an international organization, and that organization’s officers hadn’t responded by promptly vacating their British posts, the populace would have responded by rioting and burning their offices.

And if my defence of mob violence as a necessary support for democracy seems too crass, I invite you to consider where political power, in general, comes from. Our word ‘political,’ after all, shares a root with ‘police,’ and people obey the police because they know that if they don’t, they could get arrested, beaten, or shot. They obey mayors, governors, and judges because those officials control the police. And state and local governments, with their mayors, governors, judges, and policemen in tow, obey the central government because the standing army is even more powerful than they are.

In short, we have the rulers we have because those rulers are willing, and able, to respond to disobedience with violence. Violence doesn’t have to happen often – in the United States, for instance, the federal government hasn’t had to wage war against noncompliant states since the 1860s, and it hasn’t even had to threaten them with soldiers since the 1960s. Still, the memory of violence is there, and the obedience follows.

In a democracy, revolutionary violence has to be a possibility if the dictates of the common people are spurned – otherwise, the people don’t rule, and the regime isn’t a democracy. When election results are overturned or ignored by the intelligentsia, civil unrest ought to follow. Otherwise, the whole idea of ‘power to the people’ is a sham.

The whole history of British democracy is a testament of this. All the rights that the common Englishman has gained since that day in 1215 when King John signed the Magna Carta on the meadow of Runnymede are rights that were at first given grudgingly, when the King or the nobles realized that the alternative was another uprising. Throughout the centuries, as countless Englishmen bore arms in defence of their liberties, a consensus emerged about what the people's rights were – or in other words, what lines the King couldn’t cross without having another insurrection on his hands.

The American War of Independence was an offshoot of all this. Among the most sacred of the traditional rights of Englishmen was the right not to be taxed without the consent of an elected body in which they were represented. For the first century or so of the English settlement of America, colonial governors, who represented the King, shared power with local elected legislatures, whose consent was needed to impose taxes. Americans were generally content with this arrangement, King and all, but when the distant Parliament in London decided that it could make laws for both the mother country and the colonies, the desires of the local representative houses being irrelevant, war ensued.

Nowadays it seems like this arc is coming to an end. Unlike their ancestors who fought war after war to preserve their rights of self-government, the people of modern Britain have shown that their electoral preferences have no teeth. The people being thus unwilling to hold onto political power, the right of rulership has passed on to someone else – not, of course, back to Her Majesty the Queen, but to an assortment of ministers, judges, and unscrupulous MPs who don’t feel bound to carry out the agenda their constituents voted for.

Some Brexiteers still hold out hope that the next parliamentary election, scheduled for December, will turn out a government committed enough to strike a deal before the new deadline. But they shouldn’t hold their breath; none of the previous elections did that. In any case, the vote back in June of 2016 was close; “Leave” only won by 52% to 48%. Eventually, the Tories will become disillusioned and their turnout will suffer, Labour will win a majority in one of these snap elections, and the whole thing will end up dead and buried, alongside the larger project of British democracy.

American democracy, on the other hand, is already a nonentity, having seldom reared its head since the Warren Court overthrew what was left of the constitution in the 1960s. Congress is now impotent, most policy is dictated by lobbyists, and on those rare occasions when the people get around to making their voice heard anyway – like they did in the same-sex marriage referenda – no charade of compliance is necessary on the part of the elites. Justice Kennedy delivered his ruling, the media celebrated, and the people who had voted on the winning side of the election were denounced as bigots six ways from Sunday.

Now, some of my readers are probably doctrinaire conservatives who, though agreeing with much of what I say, are bothered by my characterization of the government under which we once lived as democratic. “We’re a republic, not a democracy,” they say, seemingly oblivious to the fact that human language only has the meaning that its users agree upon, and that for the vast majority of the people who have used these two words throughout the last few centuries, they were synonyms.

And this is as it should be, because “Democracy” and “Republic” started out as Greek and Latin words that meant the same thing. That is why, for example, the Hellenic Republic (the country which westerners, going back to Roman times, have called ‘Greece’) is called in its own tongue Helleniké Demokratía.

The question of why so many conservative intellectuals make so much hay out of this imaginary distinction – a distinction which, I should add, ought to have little relevance to people living under an oligarchy – is something that I plan to address next week.. 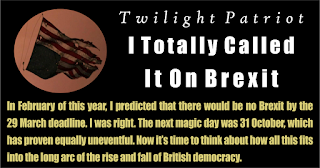