Back in 1776, America claimed a “separate and equal status” with other nations. But now, our alliances are usually based on an understanding that the other nation has fewer rights than we do. And in the end, America’s client states always end up getting sold out by the regime in Washington.

Foreign affairs have accounted for a larger-than-usual share of notable events this week, with newsfeeds blaring out headlines like the following:


US Withdraws From Syria With Tail Between Legs!

Trump and Syria: The Worst Week For US Foreign Policy Since The Iraq Invasion?

Trump’s Betrayal Of The Kurds Will Echo For Generations.

To make a long story short, when President Trump abruptly withdrew American troops from Syria, Turkish forces poured across the border to secure the territory and finish off the last of ISIS. Caught in the crossfire are the Kurds, the only faithful allies that America and Israel ever had in that part of the world. Kurdistan’s brief foray into self-government, which began when the regimes in Baghdad and Damascus fled ISIS’ territory and left the Kurds to fight the Islamic State alone, is now on the verge of being stamped beneath the Turkish boot.

This turn of events is certainly dismaying, but it shouldn’t come as a surprise to anybody with a memory longer than that of a goldfish. About two years ago, in September of 2017, Kurdistan held an independence referendum with 93% voting in favour. The United States, despite characterizing itself as Kurdistan’s ally, refused to support Kurdish independence, as did most other countries, the main exception being Israel.

Ever since then, it’s been obvious that, while America might have an alliance of convenience with Kurdistan, that alliance isn’t based on any concept of equal rights. The Kurds do not, for instance, have the right to self-determination that the Americans exercised in July of 1776.

And the outcries that recent events have elicited from President Trump’s political rivals should be taken for the crocodile tears that they are. Neither party’s mainstream has ever supported Kurdish independence. That the Kurds should have less rights than we do is a matter of agreement; the question is only how much less.

And now the upshot of it all is that the nation which bore the brunt of the fighting in the ground war against ISIS will learn the same bitter lesson which nations like Taiwan have already learned – that America will always sell out its client states.

No doubt the opponents of Kurdish independence have reasons for their point of view. For one thing, national identities based on ethnic heritage are considered backwards in the world of today, where the inhabitants of the Middle East and Africa are expected to instead direct their loyalty based on lines arbitrarily drawn on a map by European colonial powers. And for the Kurds, those lines point toward Baghdad and Damascus.

Another reason is simply that Turkey, which is an important geopolitical partner of the United States, doesn’t want an independent Kurdistan.

Still, if one goes back and reads the American Declaration of Independence – the piece of legislation on which our ideas about when a country has the right to become independent ought to be based – one will find that appeasing the largest nation in the area wasn’t a driving concern for us. And it wasn’t a driving concern for other countries, either: France, Spain, and the Netherlands all recognized American independence before the Revolutionary War was over.

A little over a century later, America found itself in a similar situation to the one that France had been in. The Spanish-American war was near an end, and the defeated Spanish force in Manilla, caught between an American fleet and the land forces of Filipino independence leader Emilio Aguinaldo, ignored Aguinaldo and surrendered to the Americans. The Americans not only accepted the surrender, but reneged on their promise to support Philippine independence and spent the next few years fighting a brutal counterinsurgency against their former allies, at last reducing the fledgling Philippine republic to just one more American territory.

Such transparent landgrabs aren’t in fashion in the world of today, and in any case, the United States is past the phase in its history where expansionism is seen as desirable. Now, the process of betrayal simply consists of abandoning an ally to the depredations of whichever large, nearby country believes that said ally has no right to exist.

This is what happened with Taiwan, when America suspended diplomatic relations in order to appease a larger and wealthier new partner in Red China, and then bullied the Taiwanese into giving up their nuclear program. Now Taiwan is defenceless against the day when the Maoist regime finally decides that the time has come to retake a territory whose allies have already decided that it deserves fewer rights than they do.

This is what is happening to the Kurds right now, and it’s what will probably also happen to South Korea, once America no longer has the resources to keep a huge garrison in that country and the South Koreans realize, all too late, that keeping Kim Jong Un’s men out would have required a military that could stand on its own two feet.

But there is one country that is often mistaken for an American client state, even though it doesn’t actually deserve that label. A country which has a close military alliance with the United States and which, like Taiwan, is surrounded by enemies who insist that it has no right to exist. But rather than relying solely on American garrisons to protect itself, that country used universal conscription to build the strongest military in the region. And that country also refused to be bullied into not developing nuclear weapons.

The country that I am talking about is, of course, Israel. And the reason that Israel will probably continue to exist in the post-American world is because, unlike Taiwan, South Korea, and Kurdistan, Israel has avoided becoming America’s client state. 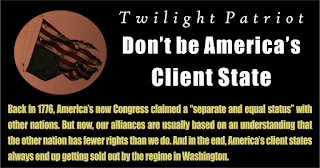