When America’s war machine is at the beck and call of the biggest human rights abuser in the Middle East, and not even Congress can stop the President from waging war on its behalf, something has gone terribly wrong.

Saudi Arabia’s long involvement in the Yemeni civil finally exploded onto the home front last weekend when a drone attack, launched by the Houthi rebels, destroyed oil processing facilities that handle half the country’s petroleum. This isn’t quite as dramatic as it sounds, because even though production capacity has been briefly cut in half, most of the petroleum infrastructure – oil wells and so forth – is still in place, and the bottleneck will only last until repairs are made. Still, it was enough to send oil prices spiking and get an interesting response from President Trump, who tweeted the following:


“Saudi Arabia oil supply was attacked. There is reason to believe that we know the culprit, are locked and loaded depending on verification, but are waiting to hear from the Kingdom as to who they believe was the cause of this attack, and under what terms we would proceed!”

Hawaii congresswoman Tulsi Gabbard replied to the tweet with:

“Trump awaits instructions from his Saudi masters. Having our country act as Saudi Arabia’s bitch is not ‘America First.’”

Now, as most folks are probably aware, the “culprit” that “we know” is supposed to be Iran, which has sided with the Houthis in the proxy war in Yemen. President Trump, on the other hand, has entered the war on Saudi Arabia’s side. Since America no longer has a constitution, no congressional approval was necessary, and when Congress tried to weigh in anyway, by passing a bill to end US involvement in the war back in April, the President responded with a quick veto.

The upshot is that America has inserted itself into the Arabian peninsula’s bitter Sunni-Shia rivalry by assisting in a brutal air war whose attendant famine and mass civilian deaths are driving more and more young men into the camp of the Houthi rebellion. These are the people I mentioned briefly in a post back in February, famous for, among other things, their one-of-a-kind national flag, which reads:

Allah is Great!
Death to America!
Death to Israel!
Curse on the Jews!
Victory to Islam!

As I’ve said before, these obviously aren’t the good guys. But neither are the Saudis, whose persecution of Shias and indifference to the suffering of poor Muslims all over the world has fed the flames for a whole catalog of terror movements. The Houthis are simply what you get when you treat the peasants the way the Saudis have been doing for decades. America has no business indulging this sort of regime.

And that’s why I agree with Tulsi Gabbard. Even though Gabbard is a Democrat, and I hence I reject her entire domestic agenda, I think she’s right to say that America should stop being Saudi Arabia’s bitch. If the President waits for instructions from a foreign monarch as to whom to attack, and then proceeds over the objections of his own country’s Congress, then he hasn’t done a good job of defending his country’s sovereignty.

That’s my opinion, unpopular as it may be on the Republican side of the fence. Nor do I buy into any of the propaganda about how America’s involvement in Middle Eastern statecraft is necessary to protect innocent countries from the evil that is Iran.

So the next time you hear a pro-Saudi neocon bloviating about Iran’s human rights record, just remember the facts. Iran didn’t wait until 2017 to let women drive – that was Saudi Arabia. And like Iran, Saudi Arabia executes a lot of people; what’s more, capital punishment isn’t limited to murder and sex crimes: the Saudis frequently behead religious dissidents, as well as teenage boys who participate in political protests.

And don’t forget about the Khashoggi murder. As a central pillar of international law, embassies and consulates are sacrosanct – pieces of a country over which it surrenders its sovereignty to a foreign government, even to the point of allowing criminals to live there for years if the hosts are sympathetic. And yet, in the minds of the Saudi diplomats, killing a visiting journalist, cutting him up with a bonesaw, and hiding the body in the backyard garden is an appropriate use for a consulate.

In an age when the West’s leaders had more honor, such an act would have resulted in an international uproar and the end of normal foreign relations for Saudi Arabia, as all of its embassies were closed and its ambassadors sent packing. Now? Hardly a whimper.

In conclusion: the American alliance with Saudi Arabia, and against Iran, isn’t based on human rights, or on putting America first, or even on upholding a stable and relatively peaceful world order. There just happens to be a very longstanding tradition, backed by a lot of oil money, of America being Saudi Arabia’s bitch.

And, as events have shown, it’s not a tradition that President Trump has any desire to challenge. 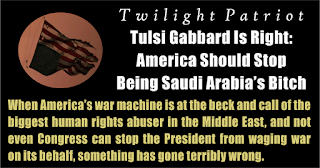