Nobody Will Win The Trade War

The tariffs which President Trump is imposing on China are a good way to look tough in front of the voters. But as long as the Federal Reserve keeps making it possible for America to consume more goods than it produces, the American working man will remain obsolete.

As anyone who hasn’t spent the last two years hiding under a rock must know by now, President Trump is waging a so-called Trade War with China. The idea – insofar as there is any idea behind it – is that by bringing home the victory in the trade war, Mr. Trump will restore the jobs that have been bled out of this country over the last few decades.


Now, it’s true that America has been losing manufacturing jobs since the 1980s, and many of our rust belt towns are only a shadow of what they once were. But if the situation really calls for a ‘war,’ trade or otherwise, then it’s necessary to answer the question of just what belligerent act started the hostilities, and just how it is that further belligerent acts will force the enemy to back down.

But thinking about those questions will cast a lot of doubt on the idea that a ‘Trade War’ with China is a good idea, or that it’s something which the United States (or China, for that matter) could possible ‘win.’

Like all of the economic problems in the modern world, the trade deficit with China – which is supposedly Trump’s causes bellum – is tightly bound up with monetary policy and central banking. America has a trade deficit with China because the Federal Reserve, by printing so much paper money, has allowed America to import more goods than it exports without running out of currency.

But if you listened to the politicians, you would hear that China is a currency manipulator, which is true, of course. China, like the United States, has laws which assign arbitrary monetary value to paper currency; both countries manipulate their tokens of currency to be worth more their intrinsic value. If China does this in a way that America doesn’t approve of, so what? It isn’t like America’s day-by-day decisions as to what it’s money should be worth don’t also create winners and losers.

No amount of currency manipulation by China would allow America to do what it does – that is, to consume more goods than it produces – if it weren’t for America’s own bankers creating enough dollars from thin air to support America’s present trade deficit. If we still used gold or silver money, trade deficits would be impossible. As it is, the easy money which the Fed has been providing, with Mr. Trump’s support, for the last few years will guarantee a continuation of the status quo, no matter how many tariffs and counter-tariffs are imposed to distract us from that fact.

As long as the dollar remains the global reserve currency, and America keeps on exporting dollars in lieu of actual goods and services, the American working man will keep on losing. Eventually, this arrangement will have to end, but after decades of deindustrialization, America can’t lose its ability to rely on foreign labour without becoming, in the meantime, a vastly poorer country. America’s wealthy classes are benefitting handsomely from an arrangement in which the Federal Reserve replaces the American worker as the means by which America pays for its imports.

And so, no matter what sort of rhetoric they put out for public consumption, politicians on both sides of the aisle will do their best to keep the trade deficit in place. Meanwhile, as the trade war continues, farmers will complain about being unable to find buyers for their grain, construction workers will complain about the higher price of steel, and Democrats will blame all our economic woes on President Trump and his deplorables, because they, like the Republicans, have no desire to talk about what has really made the American worker obsolete.

Now, the fact that America is losing the Trade War does not mean that China is going to win. Trade is, after all, supposed to be a mutually beneficial arrangement; no matter how hard you try, you can’t win at trade when the other side insists on seeing it as a zero sum game. Rather, what’s really going to happen to the Chinese, sometime in the next decade or so, is that the consequences of dealing with the United States on the terms I have described will finally catch up to them.

If the United States consumes more than it produces, then somebody has to produce more than it consumes, and the primary country filling that role today is the People’s Republic of China. For a great many years, China has done the opposite of what America has done; China has exported more than it imported, and that surplus has led China to accumulate of over a trillion dollars in imaginary paper wealth – specifically, in US Treasury Bonds.

The Chinese have lent us the money to buy their own products. It made them rich, in a sense, for the time being. But in the long term, it’s a losing strategy. China now owns so many dollar-denominated assets that the Chinese stand to be the next biggest loser, after America itself, when the bottom finally falls out of the US Dollar.

Both countries know this. Neither side really wants to upset the apple cart. The Trade War is a distraction, created out of political necessity, as President Trump must placate his voters with tariffs, and President Xi must save face by responding in kind. And at the end of the day, the game has no winners. 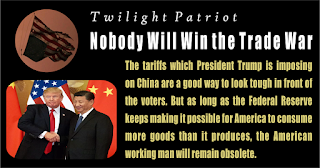