Passing articles of impeachment against Trump won’t get rid of him, but it will set a new precedent in American politics – namely, that every president gets impeached, as soon as the opposition party retakes the House of Representatives.

Well, it looks like the Democrats have finally done it. Nancy Pelosi gave her base what it has always wanted and greenlighted a House impeachment investigation against President Trump. Officially, it has something to do with the Ukraine. In reality, the Democrats are calling for impeachment for the same reason that they’ve been calling for impeachment for almost three years – because the wrong guy won the election back in 2016.


There are patterns in politics which, once they get started, do not easily stop. For instance, I think it is quite likely that, after Senate Republicans made their decision not to grant even a hearing to Merrick Garland, we’ll never see another Supreme Court Justice confirmed under divided government. Likewise, after what the Democrats did with the Kavanaugh hearings (which was complete overkill, since Justice Kavanaugh will probably turn out to be a liberal) there probably won’t be any more Supreme Court nominations that don’t involve baseless allegations of sex crimes.

But the precedent which the Democrats are currently setting really takes the cake, because if they go through with it, we can expect to see every president impeached, as soon as the opposition party retakes the House, for the rest of our lives. The impeached presidents will likely never be convicted, but the familiar cycle of back-and-forth swings in the control of Congress will have gained a new and highly telegenic component.

If that is going to be the future of impeachment in the United States, then how, one might ask, does it compare to the process’ past? A review of history is order, if only for the sake of making it clear just how far our system of government has gone awry.

The opposite of one bad thing is usually another bad thing, and the future that is now barrelling down on us, in which every president is impeached, will be no worse than the last two centuries, during which the impeachment process was rarely used at all.

The goal of America’s founders was to create a republic. To preserve that republican form of government, the elected officials in Congress were expected to frequently use their impeachment power to keep unelected officials in line. The broad phrasing of ‘High Crimes and Misdemeanours’ was intentional, and the authors of the Federalist papers imagined presidents being impeached for waging undeclared wars or otherwise abusing their power, while judges could likewise be impeached for exceeding their constitutional authority and attempting to usurp legislative power from Congress.

But history didn’t go in the direction it was supposed to. The first official of any sort to be impeached and tried by the Senate was Judge John Pickering in 1804; he was convicted of “drunkenness and unlawful rulings” and removed from office. But when Supreme Court Justice Samuel Chase faced the Senate the next year for his role in enforcing the unconstitutional Sedition Act, he was acquitted, and no other Justice has been impeached ever since.

The first presidential impeachment came in 1868 when Andrew Johnson was tried for wilfully violating an act of Congress that he deemed unconstitutional. Like Chase, Johnson was acquitted. And the framework in which such an event was possible – in which serious questions of constitutional limits were sometimes be decided by the democratic institution of an impeachment trial, rather than the oligarchic institution of judicial review – would not last into the coming century.

Ever since then, the probability of getting impeached has been proportional to the smallness of the offense. High crimes have made way for petty ones; grand overreaches of constitutional powers can’t get a politician hauled before the Senate, while misdeeds of the type that you or I could commit, such as lying in a sexual harassment lawsuit, just might do the job. That is how Richard Nixon was able to get away with expanding the Vietnam War to an entirely new country without risking his political life, but then ended up resigning anyway rather than be impeached for covering up a two-bit burglary.

And this process has reached its finale in what is happening to Donald Trump. The Democrats made up their minds from the beginning that they wanted him impeached, but they can’t do it for the high crimes he is actually guilty of, such as waging undeclared wars in the Middle East, because dusting off the constitution would put the entire bipartisan power structure in jeopardy. So instead, they spent two years blathering about Russian collusion, and when that didn’t pan out, they came up with the Ukraine thing.

An outline of Trump’s crime is as follows, and no, I am not making this up:

Back in 2014, Joe Biden’s son Hunter joined the board of the Ukrainian natural gas company Burisma at a salary of $50,000 per month. Hunter Biden had no experience in the gas industry, and no qualifications for the position except that his father was Vice President. This, along with other events, led Ukraine’s prosecutor general to open an investigation into Burisma for corruption. But then Joe Biden, while negotiating foreign loans in eastern Europe, threatened to withhold $1 billion from Ukraine unless the prosecutor was fired and the investigation dropped, and he got his way. You can read the whole story in this article at The Federalist.

After Donald Trump became president, he asked the Ukrainians to reopen the investigation. To hear the Democrats spin it, you’d think that Trump was simply going to foreigners for dirt on a political opponent, but in truth, the US has always worked with foreign intelligence agencies on international corruption cases like this, and there is no law granting immunity to the son of the Vice President. The fact that this is a continuation of an investigation that began before Trump was president makes it even harder to dismiss as a matter of partisan politics.

And so it begins. If the more vocal end of the Democratic party has its way, there will be an impeachment trial, which will almost certainly end in acquittal, followed by another impeachment trial, and another, every four or eight years when control of Congress changes hands and the new majority doesn’t like the president.

And to the few citizens who are really paying attention, all of this will come as just one more reminder that the job of elected officials these days is not to wield power, but to draw attention away from it. 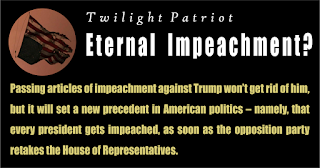