No matter how far off the rails present-day America goes, there are still moments in our national story that will never lose their brightness. July 20th, 1969, is one of these.

This blog has been criticized for its pessimism, an attitude which shouldn’t surprise anybody when I call myself “Twilight Patriot” and identify myself as someone “with eyes open wide enough to see the coming nightfall.” Nonetheless, due attention should be given, from time to time, to the sort of moments that came to define American greatness – the things on which I am so dismayed to see the curtain being pulled down.


Although I despise the civilization that presently surrounds me, the one thing about America that I will never cease to love is its history, and today, 20 July 2019, marks the 50th anniversary of one of the great moments in that history.

People have a lot of opinions about the Apollo Program and the moon landings. Were they a hoax, a waste of time and money, a brash offshoot of the cold-war rivalry with the Russians? I will not waste time debating whether they were a hoax, and as for whether Apollo was a waste of money or a minor spinoff of the cold war, those notions can be laid to rest simply by thinking about how 1969 will be viewed in the coming centuries: my belief is that the fact that men walked on the moon will be remembered, and the surrounding politics and economics will be forgotten.

And that is the beauty of it. Exploration and discovery need no validation outside of themselves. From the dawn of time, men have been venturing to go beyond the next hill, to climb the unclimbed summit, and to see that which no one had seen before. People will remember the moon landings as a time when mankind did such a thing. The bootprints on the moon, and the knowledge that the number of men who have walked there is no longer zero, but twelve, will endure beyond the fall of our civilization.

I am not a techno-utopian, and I will not wax eloquent about how space travel is the solution for anybody’s problems here on earth. But that isn’t what exploration has ever been about. The awareness that someone is out there, pushing the boundary into the unknown and sharing that experience with the rest of us here at home, is enough to satisfy me, as, I am sure, it is enough to satisfy millions of other Americans, especially the young and the young at heart.

I don’t think that the government ought to be spending large sums of money on a new space race, nor do I think that there is any chance of a return to the moon in the near future along the lines that the Trump administration is promising. The culture and politics of the 1960s are those of a bygone era. If there is to be another round of adventuring, let private adventurers lead it and fund it themselves – there are plenty who are willing to do so.

Right now, American civilization is on its downslope. As I have explained elsewhere on this blog, I expect the next half century to be a time of brutal and well-deserved decline. And the people that are left to pick up the pieces will remember the fallen regime as one of the biggest human rights abusers that the world has ever seen – as well they should, because to do otherwise would be to insult the memory of its victims.

But I hope that, in times to come, as the American collapse takes the place of the fall of Rome as the historical archetype of debauchery and excess, America’s earlier eras will retain their brightness, and revolutionary America will be a model to be looked up to, as was the Roman Republic. In our day, when something is compared to Rome, we know from the context whether the speaker has in mind the sprawling empire of Nero and Domitian, or the city-state of Poplicola and Cincinattus; in the future, when men and women speak of America, I hope that the listeners will likewise know when the nation of Washington and Jefferson is being referred to.

And there will also, I hope, be a place for the America of Neil Armstrong, Buzz Aldrin, and Michael Collins. 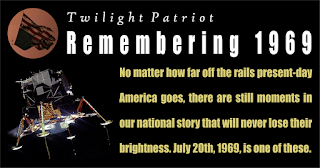