How to Tell if Something is Fascist

I didn’t expect that Barrack Obama and Emanuel Macron would turn out to be fascists. But if we take the Left’s rhetoric to its logical conclusion, that is indeed what has happened.

When you hear the name ‘Emmanuel Macron,’ you probably recall that he’s the President of France. Perhaps you remember how he beat Marine LePen by a two-to-one margin in the second round of the 2017 presidential election, or how he got hitched to future First Lady Brigitte Macron – they met when he was 15 years old and she was a 39-year-old teacher at his high school; his parents sent him to a different school in an attempt to break off the relationship, but to no avail, and after Macron turned 18, Brigitte divorced her husband to marry him.


If you’re a right-winger like myself, then Macron probably comes across as an effete socialist, out of touch with the working class and woefully unfit to confront Europe’s existential problems. What he definitely isn’t is a fascist.

Unless you take the American left’s logic seriously.

You may recall that President Trump’s Independence Day celebration, with tanks and fighter jets, elicited howl of protest from the leftist media, who denounced the spectacle as militaristic, authoritarian, and fascist. As some of us still remember, planning for this show began after President Trump saw a military parade in Macron’s France and decided he wanted to do something similar in his own country.

Also, in France, the tanks got to actually drive down the streets, while Trump settled for static tanks due to fears that their treads would damage Washington’s weak, swampy roadways. So if, as the media assert, this kind of spectacle means that a nation’s leader is a fascist, then not only is Emmanual Macron a fascist, but he is an even bigger fascist than the prototype fascist, Donald Trump.

As it turns out, President Macron is not the only left-winger who has suddenly found himself redefined as a fascist in this new sense of the word. As is known to everyone who hasn’t spent the last two years hiding under a rock, Donald Trump’s desire to enforce the border means that he is a fascist. Because enforcing the border means locking people up when they cross it illegally. And some of those illegal border crossers are children, and there is nothing more fascist than children in cages.

Except that none of these policies were started by President Trump. Illegal aliens are being treated the same way today that they were under the Obama Administration. Trump talks a lot more about on cracking down on illegal immigration, but policy-wise, little has changed between the two. Obviously, during the Obama years the detention camps were seldom reported on, and nobody called Obama a fascist for his halfway efforts to enforce the border – halfway efforts upon which, I must remark, Trump has scarcely improved.

But that was before Donald Trump became president. Border enforcement is something that Trump talks about a lot, therefore, it is a fascist thing to do. Which, if we’re being honest, must retroactively make Barrack Obama a fascist.

George Orwell, as you may recall, was fond of griping about the decrepit state of political discourse in his time. In 1946, he lamented that “the word Fascism has now no meaning except in so far as it signifies ‘something not desirable.’”

It seems that now, some seventy-odd years later, the American Left has gotten around to rectifying that situation. “Fascism” no longer has no meaning – rather, it refers to whatever a particular ‘Someone Not Desirable’ is doing at the moment. Which, depending on the phase of the current news cycle, may include half-assed border enforcement, or giving a speech in front of a couple tanks.

Which makes Barrack Obama and Emmanuel Macron fascists, too. 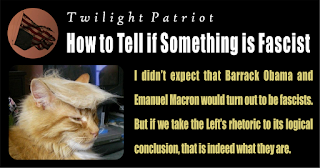