Thoughts of a Deficit Whisperer

Trillion dollar deficits have an upside that the other injustices of modern America don’t – they carry within themselves the seeds of their own destruction. As a deficit whisperer, I’ve done my best to make a timetable for when out-of-control spending will bring the whole rotten system tumbling down.

Classical liberals such as myself have a lot to complain about when we look at how America is governed. Of all the things that rankle us – be they endless wars, judicial despotism, bureaucratic overreach, mass incarceration, what Planned Parenthood does, or any of the other rampant injustices in our society – deficit spending stands out as the thing which contains within itself the seeds of its own destruction.


In other words, unlike most of the awful things the US government does, deficit spending will actually crash the system if it keeps going on like this. And because I am passionate about all those other injustices, I can watch each uptick of the deficit looking forward to the coming denouement.

So what does it mean to be a deficit whisperer? It means I pay careful attention to where the deficit is now and where it is heading in the future, as I try to make a timetable for when it brings the whole rotten system tumbling down – which is bound to happen once the dollar starts looking weak in the eyes of foreign countries, and America loses the ability to mooch off of other countries’ workforces by exporting dollars.

Back to the present situation: Sometime in the past week, the US federal budget deficit exceeded a trillion dollars. I can’t say for certain when it happened; usdebtclock.org’s estimate of the deficit jumped from $999 billion to $1.007 trillion overnight on Sunday when they updated their source data. But whatever the particulars, the outcome is that trillion dollar deficits are back in America, and this time, they are here to stay.

Unlike under Obama, when the trillion dollar deficit was a temporary measure taken during an economic downturn, the Trump deficit has come during a boom time, with every indication of being the new normal. Indeed, if present trends continue, the deficit will reach $2 trillion less than three years from today!

But numbers like a billion and a trillion only have meaning when you put them in context, and for that, the all-important number is the debt-to-GDP ratio. For the US, it’s currently 105.6%, but it’s forecast to reach 121.5% four years in the future. From then on, we can expect a steady rise. My own prediction is that sometime before 2035, debt will reach double the GDP.

And then comes the economic meltdown. It probably won’t be a matter of the US defaulting on the debt, as there is no need to default when a country can print its own currency. Rather, foreign traders will simply lose confidence in the dollar once they realize that the US can only remain solvent by rapidly inflating its currency.

This will spark a chain reaction, as the dollar will lose most of its value once international trade has moved on to some other currency. Trillions of US dollars will be shipped home in short order, leading to severe inflation, an end to most imports, and an economic collapse worse than the Great Depression. I predict that, due to inflation and economic decline, the price of oil will reach $1000/barrel sometime before 2045.

The central government will prove unable to meet the challenges posed by the aging population and the end of material security and military power. Without the ability to maintain order or keep the goods flowing, the regime in Washington is bound to fall. I predict that by 2055, the United States will have broken up into separate countries, putting an end to the imperialistic wars, judicial despotism, bureaucratic overreach, mass incarceration, and taxpayer funded abortions.

It will be brutal, but it will be worth it. And once the people have been rudely awakened from the state of thoughtless torpor in which they are presently maintained by their endless comforts and amusements, then maybe, just maybe, one of those new countries will evolve into something that resembles the kind of republic that the Founders intended for America to become. 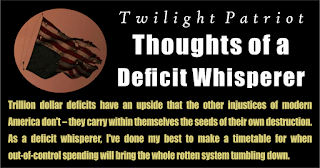