The assertion, in the absence of evidence, that Iran is responsible for yesterday’s attacks, should not be believed. Iran has no motive to attack oil tankers, but the Trump Administration has plenty of motives to blame Iran.

Yesterday morning, two oil tankers were attacked with explosives in the Gulf of Oman. One was the Japanese-owned Kokuka Courageous; the other was Norway’s Front Altair. Not a lot of reliable information is out yet – sources disagree as to whether the weapons were torpedoes or limpet mines, and whether the ships sank, or were merely abandoned after catching fire.


There also isn’t any agreement as to who did it. Mike Pompeo, the US Secretary of State, immediately blamed Iran, saying that no one else in the region has the ability to carry out such a sophisticated attack. Iran vociferously denied it.

All of this raises an important question: why would Iran do such a thing? The State Department’s assertion that Iran was responsible provides no evidence and no motive, only repeating old accusations of “forty years of aggression against freedom-loving nations.”

But since I believe that evidence and motive are important in solving mysteries like this one, I will write a little about why I believe that Iran isn’t responsible, describe three other possible perpetrators that did have a motive to commit the attacks, and, finally, discuss the Trump Administration’s motive for blaming Iran.

Iran’s main foreign policy goal is to be left alone by the United States – something that is easier said than done. For instance, it took years of negotiating with the Obama Administrating to get JCPOA, a promise of sanctions relief in exchange for an end to Iran’s uranium enrichment. But since the deal was never ratified in the US Senate, President Trump was able to rescind it shortly after taking office. This prompted outbursts of anti-American anger in Iran, and the centrifuges were turned back on. Unsurprisingly, the Trump administration is acting as if Iran is the aggressor.

The originalists in my audience may recall that the constitution does not give Congress power to regulate commerce between foreign nations, but that was back in 1787. Nowadays, America is Emperor of the World, constitution be damned.

And blaming the oil tanker attacks on Iran makes no sense when one considers that one of the tankers, Kokuka Courageous, was owned by Japan, a country whose prime minister was in Tehran at the time, discussing ways to circumvent the American sanctions. Why would Iran attack one of the few countries that is willing to stand up for its rights?

And in case any of my readers have misconstrued my previous post about how the United States would lose a war with Iran, I will repeat that I meant “lose” in the sense that, if war broke out, the Iranians would keep their independence and inflict more damage on America than the Americans are willing to bear. But the majority of casualties, especially civilians, will still be Iranians. Iran has no incentive to make itself the aggressor in a war that would get millions of its people killed.

Having explained why I believe that Iran is not to blame, the question becomes one of who actually has a motive to attack those tankers? In other words, cui bono?

It could simply be ordinary middle eastern terrorists. Perhaps they were funded by Iran, though they certainly weren’t taking orders from the Iranian government. Perhaps they were funded by Saudi Arabia. They would have been acting out of general anti-western sentiment, driven by anger over foreign involvement in the middle east, rather than any sort of coherent grand strategy.

On the other hand, it could have been a conspiracy on the part of oil speculators to drive up the price of crude. Oil futures surged 4 percent on the day of the attacks, and investors with their money leveraged properly would stand to make a huge profit.

Or it could have been a false-flag attack by the US to gain a pretext for war with Iran. While I am listing this as a possibility, I don’t believe that it is more likely than the other two.

What, then, is the State Department’s motive for blaming Iran? Inertia is part of it: enmity with Iran has been a staple of US foreign policy for decades, and old habits die hard. Also, it gives Donald Trump an opportunity to look tough, by breathing out threats against Iran should the aggression continue.

Mike Pompeo and John Bolton are war hawks who want an increased American presence in the middle east. Even if they can’t convince Trump to invade Iran – and at this point I think that they can’t, because Trump knows better than to start the next Vietnam War – they’re still on the lookout for reasons to escalate things and deploy more American forces near the Iranian border.

Finally, the media coverage of these events – in which President Trump gets to be the good guy for a change – is a welcome relief from the constant focus on his administration’s domestic scandals and failure to secure the border.

In conclusion: Iran had no motive to attack the oil tankers in the Gulf of Oman. Other people did have motives to do so. And the Trump administration definitely has motives for blaming Iran – but don’t bet on Mr. Trump moving on to open hostilities, because if it came to war, America stands to lose. 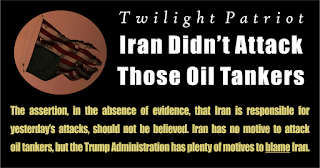