America’s current political spectrum, and the mainstream conservative and liberal camps, cover a very small portion of all possible ideologies. To truly understand out times, it is necessary to escape the left-right axis, dump traditional media, and instead follow an array of eclectic blogs.

If you have been reading Twilight Patriot for a while, you will probably have noticed that I don’t fit neatly into the conservative camp of American politics. I voted for Donald Trump and will do so again, but I also think he’s a windbag. I disagree with the Republican Party’s denial of climate change, but I also think that anyone who votes Democrat because of that issue is being played for a fool.


I have criticized the British people for not rioting on account of the delays in implementing Brexit, and I have criticized right-wing Americans for not having a revolution – violent or otherwise – over the abortion issue. I admire George Washington, Thomas Jefferson, Martin Luther King Jr., Ron Paul, and Vladimir Putin.

I think that conservatives ought to dump their islamophobia. I despise the House of Saud, but have a favourable opinion of Iran. I look forward to the collapse of the US dollar. And I believe that the three biggest moral abominations of modern America are abortion, medicating children for ADHD, and what the Federal Reserve does – in that order.

If you tried to place my ideology on the traditional political spectrum, you would probably conclude that I’m somewhere on the extreme right wing. The trouble is that, on the left-right axis, the “far right” includes both libertarians and fascists. And the statement: “he’s somewhere between a libertarian and a fascist” has very little meaning.

The truth is that I escaped the left-right axis a while ago. And the fact that my beliefs are uncategorizable is a good thing.

The opinions of the modern left, right, and center – in other words, what you’ll find on MSNBC, CNN, and Fox – are a tiny subset of all the political opinions that have ever been held throughout human history. And anyone who calls people like me extremists – that is, anyone who thinks that the only legitimate opinion is some sort of mixing together of the opinions that are commonly held in his own small piece of spacetime – is an idiot.

One reason I think this way is that I was raised to study the classics, and to be part of an intellectual tradition that bestrides millenia of history, next to which the combined viewpoints of Fox, CNN, and MSNBC look rather puny. But another reason is that, as I grew up, I learned to ignore mainstream news sites and instead follow an array of eclectic blogs.

Then I found Matt Walsh. Walsh writes for The Matt Walsh Blog – an aptly-named site if there ever was one – and he’s a right-winger who tells it like it is. Unlike some of the writers at the Federalist, Walsh is willing to say, over and over again, and quite bluntly, exactly why it is that conservatives should seek no middle ground on the abortion issue. Or on sexual liberation, or the welfare state, and so forth.

Rather than reviewing the latest Game of Thrones episode, Walsh just makes a straightforward case that Christians shouldn’t watch Game of Thones – and they also shouldn’t send their children to the public schools – and that they should go to a traditionalist church whose pastor makes them feel guilty about their sins, because modern Christianity isn’t judgmental enough.

According to Walsh, America is not, currently, a great nation – and it isn’t going to have its decline reversed – and it won’t split into multiple countries, because people these days are far too lazy to fight another civil war. Most conservatives are, on account of their apathy, just as guilty for their country’s situation as liberals are. And indifference, not hatred, is the vice that has done our civilization in.

You don’t get that perspective from Fox News, or Breitbart, or the Federalist.

Also, Mr. Walsh is the only right-wing personality I follow who talks about the damage being done to American children by ADHD medication – how child-drugging causes reduced growth, personality changes, psychosis, and permanent deficits in the same neurotransmitters whose concentration the drug is boosting in the short term.

The upshot is that a little over ten percent of America’s young men (and 3 to 5 percent of young women) are going through life with neurotransmitter deficits whose effects are basically unknown, and most news outlets, including The Federalist (which has published about a dozen stories each day since 2013 without mentioning the issue) have nothing to say.

Matt Walsh has done a lot to help me wake up to the fact that the realities of modern America are much darker than mainstream conservatives want to admit. Even so, his effects on my own intellectual development were limited by the fact that I immediately agreed with almost everything he said – to the point that the biggest issue we don’t agree on is that of emotional support animals (I am in favour; Walsh is generally opposed).

There is only so much you can do with a blog where you agree with nearly everything the proprietor has to say. That’s why the truly fun blogs are a mixture of the self-evidently true and the off-the-wall crazy – ideas which I will almost never share but which, on further thought, I very occasionally end up agreeing with.

A good example of a “fun blog” is Ecosophia – the website of the Archdruid John Michael Greer. Greer is an environmentalist, but he’s far too wise to support the Democrats on that account, and he realizes that both parties are fully committed to the same unsustainable industrial lifestyle. He criticizes all segments of modern society, but especially the Left, for their misplaced faith in abstract thinking, their insistence that the world must conform to their desires, and their dismissal of the experiences of people whom they consider to be beneath them. He takes a moderate view on the things usually called “social issues,” is against globalization, and is a mild supporter of Donald Trump.

An Ecosophia post on the ongoing rise of a unique, non-Western civilization in Russia led me to discover the websites of Dmitri Orlov and the Saker. Orlov and the Saker are both Russians whose families fled their homeland during the Communist years, so that the two men ended up watching the recent transformations of the motherland from the outside. Both are patriots with favourable opinions of Vladimir Putin, whom they see as one of the few national leaders willing to keep his country independent of the American empire – which they see as a militaristic pirate state which is desperately trying to stave off its impending collapse by forcing other countries to accept its increasingly worthless currency.

I do not agree with everything that Orlov and the Saker have to say – I dislike their whitewashing of Russia’s treatment of the Poles, I don’t share their belief that America was founded on unbridled individualism, and I reject the assertion that American foreign policy is controlled by Zionists in Tel Aviv. Nor, for that matter, do Orlov and the Saker always agree with each other: for instance, Orlov is irreligious, while for the Saker, defending the true Orthodox faith against the claims of the heretical Papists and Protestants is more important than any of the mere political controversies that grace his blog.

Nevertheless, reading these authors and internalizing their ideas – whether I end up agreeing with them or not – has brought me a much greater awareness of the alternatives to Western Europe’s (collapsing) civilizational model, the magnitude of the national turnaround that President Putin has achieved since he took power, and the role of American militarism in propping up a doomed financial system amid the ongoing struggle for dedollarization.

If you want to escape the left-right axis like I did, then I recommend reading all of these blogs, and more. Seek out people like Matt Walsh, John Michael Greer, Dmitri Orlov, and the Saker. Be eclectic. Find websites that make you think, that don’t fit into doctrinaire conservatism (or doctrinaire anything), and that don’t flatter their audience into feeling good about their unsustainable lifestyle.

In conclusion: A man who holds who holds only mainstream opinions is a man who never thinks. 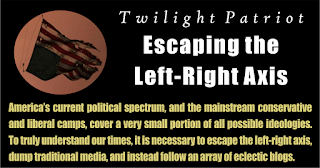