Betting on the Election - Part II

The real differences between the two dozen or so Democrats seeking the presidential nomination in 2020 are trivial. But it’s still a lot of fun to speculate on the outcome. For the benefit of anyone betting on the election, I’ll share my odds.

So far, 22 Democrats have announced their bids for the Presidency. In my last post, I described the probabilities I had assigned to the Democratic long-shots. This time, I’ll talk about the heavyweights, starting with the Senator Kamela Harris.

Harris has a strong fundraising operation and is doing well in the polls – as of my writing this post, she stands at fourth place in the RealClearPolitics national average, and I’m giving her the fourth spot among potential nominees.

Harris’ advantages are fairly straightforward: She already holds an important office – Senator from California – with more constituents than anyone else except the President and Vice President. She is also young, energetic, and female, which is exactly what a big fraction of the Democratic base wants in a champion to take on President Trump.

One of the few criticisms against Harris to come from the Left is that, in her earlier career as an attorney general, she has done things some things that anger the criminal justice reform movement. I do not think this will be a big deal; for instance, it was Hillary Clinton who came up with the concept of a ‘super-predator’ back in the ‘90s, and she still got the nomination last time around.

But even though Harris looks strong and popular at present, it’s still too far out to say whether her day in the sun will last. Overall, I rate her chances at one in twelve.

Warren, like Harris, is a female senator from a liberal state with solid Democratic credentials and a burning desire to take on the Donald. She offers a somewhat different flavour of leftism than Harris does, as Warren is older older and more willing to promise economic upheaval, but for the most part, her advantage lies in her better name recognition.

(And just in case you’re wondering, actual Democrats don’t care about the Pocahantas fiasco, just like actual Republicans don’t care how many times Trump puts his foot in his mouth.)

Bernie Sanders is in a strong position going into this primary. People know who he is and what he stands for. There is a strong suspicion among the Democratic base that if Sanders had been nominated last time, Donald Trump would never have become president. Most of the voters want a firebrand this time around, and Bernie Sanders is willing to be their man.

But Sanders also has some liabilities. Although he got a big head start with his 2016 popularity, there is also a huge number of rivals competing for the role of firebrand. Sanders doesn’t appeal to the intersectionality-mongers – apparently, ‘Jew’ doesn’t qualify as an underprivileged minority anymore – and the ‘Socialist’ label also scares some people away. It shouldn’t – it’s a meaningless label, since all Democrats want to expand the government – but it still does. With all that in mind, I estimate Sanders’ chances at one in five.

Imagine the following scenario: A man from one party wins the presidency, and he is hated by the other party’s base. The new president is accused of running the country dictatorially and wrecking American democracy at every turn. His unpopularity drives a surge in political participation by his enemies, huge rallies and protests, and record voter turnout in the midterms. All sorts of interesting characters cycle through the national stage as the opposition party’s reenergized base seeks leaders who can channel its outrage.

Then, the party nominates the most boring and conventional of the candidates on offer.

It doesn’t seem likely, from an intuitive standpoint, but it’s what happened with the Republicans in 2012, when they nominated Romney, and it’s what Biden is hoping will happen with the Democrats in 2020.

Despite all his baggage and his inability to elicit enthusiasm from his base, Biden is still leading in the polls. He has plenty of support from the monied interests and business-as-usual Democrats who just want the country to continue its march to the left with a minimum of drama.

If the Democratic voters who want someone younger and more energetic can coalesce around another candidate, then Biden will be easily beatable; if they can’t, he will likely be the nominee. With this in mind, I’m saying that Biden’s chances are one in four. 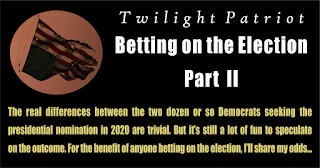