Betting on the Election - Part I

The real differences between the two dozen or so Democrats seeking the presidential nomination in 2020 are trivial. But it’s still a lot of fun to speculate on the outcome. For the benefit of anyone betting on the election, I’ll share my odds.

So far, 22 Democrats have announced their bids for the Presidency. Back in 2016, the Republicans ran 17 people and got what seemed like the wildest ride ever – but now, the Democrats have one-upped them with their own Hunger Games Primary. This shouldn’t really surprise anybody; the Democrats have been in a state of hysterical overdrive since 9 Nov. 2016, and the change to take on President Trump is the most coveted thing in the world for a Democrat.


Without further ado, here are my odds for eleven of the more serious Democratic contenders. I’ll handicap the smaller contenders in this post, and the larger ones in Part II.

Andrew Yang is a businessman who has never before held public office, but who has lapped up some media attention with his promise of a ‘Freedom Dividend’ - $12,000 per year of guaranteed income to every American over the age of 18. Despite his success as an internet meme, Yang is only polling at 1% - it seems that even most Democrats shy away from the Freedom Dividend once they realize that Yang has also called for a $2½ billion/year VAT tax to fund it. And then there is the fact that Yang never says you have to live in America to claim the money, which raises the question of whether an 18-year-old could simply move to some tropical country where the cost of living is half what it is in America and spend the rest of his life doing nothing but surf.

Also, keep in mind that when Yang first announced his candidacy, one of the issues he decided to take a stand on was… circumcision. People with a carefully reasoned policy on circumcision do not become president – they never have and never will.

My conclusion? ‘No on Andrew Yang’ is the surest bet in the history of betting.

Peter Buttigieg, the popular young mayor of South Bend, Indiana, has had a bit of a media bubble over the past few months. Some people think that his charisma and résume (he is a Rhodes Scholar and took a leave from his mayorship to fight in Afghanistan) will give him the edge, but I doubt it. Mayor of South Bend is too small of a post from which to make the jump into the presidency.

Also, Buttigieg’s homosexuality may not go over as well as most pundits are inclined to think. Acceptance of LGBT rights seems to me to be more a matter of age than of party. Obviously, the vast majority of Democrats are supportive, as are most young Republicans. But I think that there are still enough old Democrats who dislike homosexuals to scupper Buttigieg’s chances at becoming the nominee. But he isn’t a complete nonfactor like Yang, so I’ll say his chances are one in 20.

I have also placed Beto O’Rourke at one in 20. Like Buttigieg, Beto is charismatic, but his current position is too minor to propel him to the presidency under normal circumstances. He was a congressman from Texas until he ran for Senate against Ted Cruz and lost. Running in such a big state, against such and unpopular Republican, and coming so close got him a lot of attention, but to most people, he’s still just a media sensation. Nevertheless, it left him without enough money and name recognition to help in a presidential campaign, which is why I rate him at a one in 20 chance of becoming the nominee.

Booker, Klobuchar, Gillibrand, and Gabbard – 1 in 15 each

Senators Corey Booker, Amy Klobuchar, and Kirsten Gillibrand, and representative Tulsi Gabbard all have a better foothold in high office than any of the candidates I mentioned before. They also appeal to the intersectionality crowd and have solidly liberal politics. Although none has yet stood out as an individual, I think it highly likely that at least one of these four will make it into the primary’s final denouement next spring, appealing to the faction of the party that wants neither an old, white man nor inexperienced oddball. Hence, I’m giving each one a one in 15 chance in the primary.

And that will be all for Part I. Next time, I’ll discuss what I think are the major players: Harris, Warren, Sanders, and Biden. 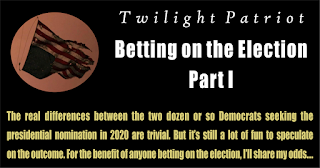