We Shouldn't Care Which Democrats Call Themselves Socialists

Republicans often express shock that so many Democrats are willing to vote for someone who embraces the label of ‘Socialist.’ But we shouldn’t let this distract us from the fact that most politicians, even in our own party, want bigger government.

When Bernie Sanders ran for President back in 2016 as a self-proclaimed socialist, he spurred a lot of discussion about just how accepting of socialism Americans are these days. Then Alexandra Ocaisio-Cortez used that same label to hog more media attention than every other freshman in Congress combined. Do her ideas, whether good or bad, actually merit such attention? Hardly, but we still give it to her.


News sites are constantly running articles about what percentage of millennials support socialism and what this says about their own outlook on life and about the future of American society. Republicans are lambasting the stupidity of anyone who wants to make the United States more like Venezuela. Sanders and Cortez are attacking the callousness of anyone who doesn’t want to make this country more like Denmark.

Right-wingers say that socialism is communism-lite. Left-wingers say that democratic socialism is the complete opposite. But there can be no definitive answer as to what, exactly, socialism means, because far too many political entities over the years have described themselves as socialist. These range from Eugene Debs’ Socialist Party of America to the Union of Soviet Socialist Republics, the National Socialist German Workers Party, and the British Labour Party under Clement Atlee.

These ideologies had very little in common, except that they all wanted a bigger role for government in their countries. And when you realize that, you’ll see the silliness of focusing our attention on the few Democrats who embrace the label of socialist. All democrats want bigger government, as do many Republicans. But when a select minority get labelled as socialists, either by themselves or by their enemies, we tend to let that distract us from the broader situation.

In 1946, George Orwell wrote an essay lamenting the unintelligent state of British political discourse. One of his complaints was that “the word Fascism has now no meaning except in so far as it signifies ‘something not desirable.’”

The word Socialism, for many years, had occupied a similar place in America, until a faction of the Democratic Party decided that, to them, it now signifies ‘something desirable.’

And so the hype over the fact that a few Democrats are now embracing this meaningless label has distracted us from the fact that all Democrats, and most Republicans, support the same long list of big-government programs. And it has also allowed an intellectually empty young woman from New York to garner more media attention than the entire class of incoming congressmen did last time around.

The hype has allowed many right-wing patriots to delude themselves into thinking that America dodged a bullet by not electing Bernie Sanders to the White House when he ran as a socialist. But in truth, America has been taking bullet after bullet as every president since Hoover has expanded the size and scope of the federal government.

The decline of American civilization is like the Blind Men and the Elephant. It is too large and multifaceted for any one observer to fully understand. Founding principle after founding principle has been undermined throughout the last century. The defenders of liberty are few and far between. And worrying about which label is or is not socially acceptable for leftists to wear will do nothing but distract us from the real issues. 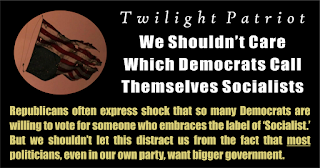