We Should Support Muslims Who Defend Their Families

A man who worships at a mosque, and also refuses to allow his children to be taught that abortion is sometimes necessary and that six-year-olds can choose their own genders, is a friend, not an enemy.

Libby Emmons of The Federalist recently published a story entitled: “Feminists Couldn’t Get Trans Ideology Out Of UK Public Schools, But Muslims Did.” She briefly described the tepid opposition which a new program to teach leftist gender theory to five and six-year-olds received from British conservatives and old-fashioned feminists – that is to say, feminists who reject the idea that anyone can be a woman. But these people didn’t make any headway, and they just ended up being labelled as bigots and ridiculed by the ruling class.


“Then,” Emmons says, “religious Muslims got wind of the LGBT+ indoctrination of their primary school students, and freaked out. According to these parents, who staged protests outside of the schools in their districts… homosexuality is not sanctioned by their religion, and they don’t want their children taught that it’s acceptable. The parents’ protests included pulling more than 600 Muslim children from school, and were incredibly effective. The lessons have stopped.”

At this point, a decently written story would have commended these Muslim parents for their forcible, and ultimately successful, resistance. Any true lover of liberty will make common cause with anyone, of whatever race or religion, who defends his or her children from indoctrination into such an ideology.

But Emmons seems to draw all the wrong lessons from these events. The next section of her story is subtitled “Moral Relativism Meets Privilege Theory,” and from there it all devolves into a lamentation of how the nonsensical ideology of the Left requires that the views of certain repressed groups – Muslims included – be given privileged status.

After spending quite a while critiquing the Left’s way of thinking, Emmons concludes by stating that “to hold the dominant Western culture to one set of standards, but to hold a culture that opposes the grounding views of Western culture to a different set of standards is to have no basis upon which to hold fast the standards that are essential for free life in a democracy. The West must hold fast to the standards of individual freedom, not group identity, as a driving factor for law making and social interaction.”

All of this leaves me with the odd impression that Emmons wishes that, for the sake of equality, the Muslim’s efforts to keep their children free of LGBT indoctrination had failed. What began as a story of people who successfully fought back against what ought to be every conservative parent’s nightmare has now wandered off into the weeds of criticizing Muslims for opposing Western culture. In other words, Emmons has let her ill feelings toward Islam eclipse her desire to protect the innocence of children.

And it is very strange for anyone to describe the Muslims in this situation as “a culture that opposes the grounding views of Western culture.” For nearly the entire existence of Western civilization, it has gone without question that children cannot choose their own gender. But nowadays, the people who most vehemently defend that principle are shunned by many conservatives because they follow an unpopular religion.

This is the sort of infighting among the opponents of tyranny that will guarantee the triumph of the Left. If you cannot see that the real enemy, in this situation, is the person who will talk a child into getting himself castrated if he feels like he was born as the wrong sex, then you are – in the British parlance – a bloody idiot.

When conservative white people read a story like this, the correct emotional response is not envy for Muslims’ place in the victim hierarchy, but shame that so few members of their own race are willing to fight just as hard to protect their own children. If white Tories, who make up about half the British population, had pulled their children from the schools en masse, they would have had an even easier time getting their way than the Muslims did.

And as for us Americans, we ought to always remember that the Founders shared a strong belief in religious pluralism among the defenders of liberty. And they left no doubt that Muslims are included in that pluralism. Consider, for instance, the passage in Benjamin Franklin’s autobiography where he describes a time when several eminent men contributed money to finance the construction of an edifice “expressly for the use of any preacher of any religious persuasion who might desire to say something to the people at Philadelphia; the design in building not being to accommodate any particular sect, but the inhabitants in general; so that even if the Mufti of Constantinople were to send a missionary to preach Mohammedanism to us, he would find a pulpit at his service.”

Religious conservatives in modern America are fighting a mostly losing battle, not against Islam, but against secular hedonism, an ideology which really is inimical to the ancient principles of Western civilization. And yet, when confronted with schools where the curriculum includes Planned Parenthood pep talks, white privilege bracelets, and Genderbread Man, most so-called conservatives will shrug their shoulders and send their children anyway.
When a Muslim refuses to do so, we are wrong to regard him as an enemy because he is a Muslim. We ought to see him simply as a man who is willing to defend his family. 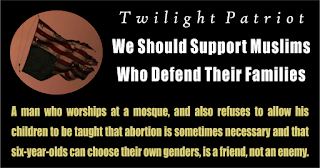