How The Federal Reserve Keeps Everyone In Debt

In a debt-backed currency system, new money is created only when the central bank lends it out at interest. The amount of money owed to the Federal Reserve will always exceed the amount in circulation, so most debts will never be repaid.

People often speak of fiat money as if its worth were purely imaginary because, unlike the gold-backed currency of the past, its value is not based on any physical substance. But that is only partially true; fiat money isn’t backed by nothing, it’s backed by debt. Everyone is scrambling to get dollars because nearly everyone has debts that can only be paid in dollars – and the scramble will, for most people, lead only to frustration, because there aren’t enough dollars in circulation to pay off all the debt.


In a debt-backed currency system like America’s, new money can only be created by the central bank, and the central bank exchanges this money for only one thing – a promise to pay back yet more money in the future. Debt created in this manner will never, on the whole, be paid off. It is mathematically impossible for it do anything but steadily grow.

America’s current problem with debt – both personal and public – is generally blamed on a lack of frugality.  And that is indeed part of the problem, as most modern Americans live beyond their means. But even in the mid-twentieth century, when the old virtues of thrift and hard work were more widespread, the middle class was kept firmly under the heel of the banking industry and was being steadily drained of its wealth.

The problem is ultimately structural. The minority of Americans who manage to pay their way out of debt can only do so by selling their goods or labour in exchange for dollars. And those dollars were ultimately borrowed, at interest, from a bank. The debt can be shuffled around, and the most talented and hardworking individuals can claw their way to the top of the pile, but the pile itself will never be diminished.

And because the amount of money owed to the Federal Reserve is always increasing, the only way to prevent the economy from grinding to a halt entirely is to steadily increase the money supply via inflation. And that is what the Federal Reserve does, by lending out yet larger amounts of money in order to cover the original debts. But central bankers know better than to set the inflation rate so high as to lose the ability to profit off the debt already owed to them. With the right balance, economic collapse can be staved off without the finance industry losing its ability to enrich itself at the expense of everybody else.

All this is not to say that individuals cannot pay out of debt if they make it a priority to do so. They need only outperform the average American – and that’s a pretty low bar. Nevertheless, America as a whole will keep sliding further into bondage, as it has been doing ever since the free coinage of silver and gold were abolished in 1873 and 1933, respectively, making bankers into the creators of money rather than mere merchants of it.

No amount of moralizing about the need to live within our means can solve the debt problem in a country whose economy is structured so that an increasing debt load is a mathematical inevitability. Abolishing the Federal Reserve, and restoring commodity-backed money, is the only way to prevent the average American from continuing to toil away as a debt slave. 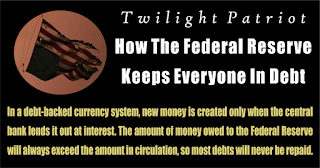