Each April 4th, we must remember Rev. Martin Luther King, Jr. on the day of his martyrdom. With his death, America lost its last major leader who was willing to defy the authorities and risk imprisonment, and worse, for his cause.

America won her independence because of the bravery of the Founding Fathers. It could not have been done without a generation of men willing to say: “We must, indeed, all hang together, or most assuredly we shall all hang separately.”


Abolitionism never would have triumphed without men and women like Frederick Douglas, Harriet Tubman, Sherman Booth, and John Brown, who risked imprisonment and worse in order to aid the escape of as many slaves as possible. And although President Lincoln professed a great respect for the laws, he would never have emancipated anyone if he hadn’t been willing to defy the Supreme Court over the Dred Scott decision, when he believed that the Justices were usurping power that rightfully belonged elsewhere.

The enemies of freedom gain power on the same principle. Lenin and Stalin both spent years in Siberia for their early revolutionary activities. Hitler and his lieutenants served time in prison after the Beer Hall Putsch. In the end, these men supplanted the old rulers because, what they lacked in decency, they made up for in courage.

The defenders of liberty cannot afford to be less dedicated to their cause than its foes are to theirs.

It is reasonable, therefore, for Americans to inquire whether such bravery has lasted into modern times. What was the most recent movement in our national politics whose leader was willing to risk imprisonment and death rather than doom his cause to failure by treading carefully? Which activist wrote a letter from a jail cell to denounce any moderate who “paternalistically believes he can set the timetable for another man's freedom?” Who, by doing such things, led his people to victory and gained near-universal acceptance for his principles?

It was the Reverend Martin Luther King, Jr., who did those things, and that’s why I believe that he is worthy of being known as America’s last great statesmen.

Some people might argue that King’s nonviolence precludes him from being on the same list with Washington, but I don’t think so. As it turned out, Reverend King's chosen strategy of nonviolent resistance was a winning strategy. Nonviolence could not have worked against any injustice, but it did bring down segregation in America, which is what King was trying to do.

The important element here lies in resistance, in defying the authorities and holding to principles which you will not give up even if you are ordered to do so. No major statesman in present-day America holds such principles; they always work within the established legal system, and will yield on anything if they sense the slightest chance of personal risk. Not so with Reverend King, who defied numerous laws and injunctions to hold his assemblies and marches. “We aren't going to let dogs or water hoses turn us around,” he said, “we aren't going to let any injunction turn us around.”

You cannot bring down the great injustices by opposing them through strictly legal means. Forms of dissent that are permitted are permitted for a reason. Only a resistor who does what isn’t permitted is a threat to the authorities.

Reverend King understood this, as should every minister in a religion whose scriptures say that “We ought to obey God rather than man.” Granted, there was always been plenty of Christians who have taken the opposite approach, and taught that it was a virtue to obey man’s laws no matter what. But the only reason they were even capable of practicing their watered-down Christianity is because people like Peter and Paul chose to practice the other form of Christianity, and got crucified for it.

On the day before his martyrdom, Reverend King gave his famous speech, “I’ve been to the Mountain-Top.” In it, he exhorted his followers to “Develop a kind of dangerous unselfishness.”

He told the story of the Good Samaritan, and speculated on why the Priest and Levite passed the wounded man by. He talked of having gone to the Holy Land and seen the road where the story was set, and how it was a winding, dangerous road. Perhaps the Levite, fearing that if he paused his journey, he might be robbed as well, asked himself: “If I stop to help this man, what will happen to me?”

“But then,” said Reverend King, “the Good Samaritan came by. And he reversed the question: If I do not stop to help this man, what will happen to him?”

And Reverend King believed that, by asking that question and standing up for their brothers’ rights, his people could win their struggle for equality. “We've got to say to the nation,” King said, “We know how it’s coming out. For when people get caught up with that which is right and they are willing to sacrifice for it, there is no stopping point short of victory.”

Americans need to remember Reverend King and the sacrifices that he made – and which no leader with his level of influence is willing to make today. And we need to tell the stories of the men and women in our history who likewise resisted despotism. The fight for freedom has taken many forms throughout the years, and it is only by remembering a diverse array of heroes, and their many tales of resistance, both violent and nonviolent, that we can prepare ourselves to struggle for liberty in our own time.

As things now stand, there is no leader of that caliber to be found in any of the modern political causes whose supporters wrongly see themselves as the successors to the revolutionaries and the abolitionists. This is not to say that the modern injustices aren’t as severe as what previous generations dealt with. Rather, the difference is that modern activists aren’t willing to make sacrifices nearly as big as those made by America’s past troublemakers.

The various political movements which presently squabble over this country’s direction are not led by the likes of Washington, Lincoln, or Reverend King. You cannot become a great statesman by moderating your positions to avoid controversy, or by never putting yourself in personal danger, or by always submitting to the law as enforced and interpreted by whoever is currently in power. Reverend King knew this, and we would all do well to remember him on the fourth day of April, and take time to contemplate his bravery, his resistance, and his martyrdom. 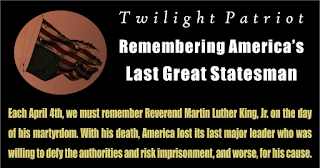