A Time To Be Brave

The father of a girl whose gender has been changed by court order could take his daughter and flee to Russia. Or he could remain in a country where speaking his child’s name is a thoughtcrime. It’s his choice.

A disturbing news story has been unfolding in Canada over the past few months. Here is how Jeremiah Keenan of the Federalist tells it:


“On 27 Feb, the Supreme Court of British Columbia, Canada ordered that a 14-year-old girl receive testosterone injections without parental consent. The court also declared that if either of her parents referred to her using female pronouns or addressed her by her birth name, they would be considered guilty of family violence.

“As previously reported, the girl was encouraged by her school counselor in British Columbia’s Delta School District to identify as a boy while in seventh grade. When she was 13 years old, Dr. Brenden Hursh and his colleagues at British Columbia Children’s Hospital decided that she should begin taking testosterone injections in order to develop a more masculine appearance.”

Keenan spends most of his article giving more details on the story and repeating the usual conservative arguments as to why what is happening is a very bad thing. Near the end of the article, he quotes the girl’s father saying: “We’re gonna fight this right up to the Supreme Court of Canada. We’re not quitting.”

What seems to go over the heads of people like Keenan is that “fight this right up to the Supreme Court,” and “not quitting,” are not the same thing. The two are only equivalent in a worldview where ‘obeying a court order’ occupies a higher place in the chain of moral imperatives than ‘not allowing your daughter to be mutilated and sterilized.’ But such is the worldview held by most Americans and Canadians.

Hence the article’s doleful conclusion: “For now, the judge’s decision stands: the 14-year-old will begin taking testosterone against a parent’s wishes on the sole basis of her own consent.”

It doesn’t have to be this way. The man could take his daughter and flee to Russia, a country which has a taken a decidedly different stance than Canada on this matter, and a country where speaking the girl’s name isn’t a thoughtcrime.

Breaking the law in such a flagrant manner is a step too far for nearly all modern conservatives, but it wasn’t a step too far for the men and women of the past whom they look up to: George Washington, Thomas Jefferson, Frederick Douglas, Harriet Tubman, Corrie ten Boom, Claus von Stauffenberg, and so forth. On the opposite side – those who chose obedience under all circumstances – you’ll find Vidkun Quisling and Adolf Eichmann. Right now, this Canadian man must decide who his heroes are.

Should he choose to resist, his prospects are good. If the Russians welcomed Edward Snowden, they will probably be equally welcoming of this father and daughter. As President Putin said, “Russia does not extradite human rights activists.”

The United States and Canada may not consider it a human rights violation for a school counselor to talk a seventh-grader into getting herself sterilized, but Russia does. The plain fact of the matter is that anybody who identifies as the sex opposite his or her actual sex is insane, and no one else ought to validate such a delusion.

In the old days, everyone knew this. But then we allowed the Left to take over and begin preying upon mentally ill children, which the present regime of factory schools, endless screen time, and behaviour modifying drugs has produced in a superabundance never before seen. But in the end, a damaged boy is not a girl, or vice versa, and living in a society that tells such children otherwise will make their lives a lot more miserable than they need to be.

I have no idea what factors played into this particular girl’s mental crisis, but whatever they were, the rulers of Russia believe that she shouldn’t be encouraged to respond by mutilating herself. The rulers of Canada and the United States have no such scruples.

Getting to Russia is well within this man’s abilities. The distance from Whitehorse, in the Yukon Territory, to Provideniya, the Russian town nearest the Bering Straits, is 1820 nautical miles. Most bushplanes can’t make that flight, but some can.

Acquiring the aircraft legally is probably beyond the man’s financial means, though this should not deter him, as planes can be stolen or hijacked. My first thoughts were that he might be able to find an Alaskan pilot willing to take him to Russia, but on further consideration I believe that to be too optimistic.

While there are no doubt thousands of bushpilots who, as gun-toting right-wingers, like to blather about resisting tyranny, such blather is usually quite empty. Just consider the fact that hundreds of children in the United States and Canada have already had their genders switched by court order over a parent’s objections, and I have yet to hear a single news story about anyone fleeing the country because of it. If fewer than one percent of Americans are willing to make such a sacrifice for their own child, then you can’t count on anyone making it for a stranger.

I now believe that the best way to pull off the escape would be for the man to get himself and his daughter onto a chartered, single-pilot plane on the pretence of going to some far-away part of Canada, then draw a weapon and demand to be taken to Russia instead.

Would doing this be difficult and dangerous? Certainly. The man would have to deal with all the challenges of leaving his home country forever and settling in a foreign land, and he would also have to somehow get a very hostile daughter to see through the delusions which the Canadian psychologists have fostered in her.

If he doesn’t choose to be brave, if he chooses to do the Eichmann thing and obey orders not matter what, nobody will judge him for it. The conservative activists who are publicizing his case will continue to praise him for fighting the good fight. But he will have lost his daughter.

It is one thing to use eloquent arguments to ask the authorities not to mutilate one’s child. It is another thing to put one’s life on the line in order to protect that child after the authorities have turned down the request.

The vast majority of modern men and women will obey unconditionally. But no one is constrained to follow the majority. Sooner or later, we all must choose for ourselves. And for this man, the choice is one of whether to resist tyranny, as did Washington and Jefferson, or to remain in a country where speaking his child’s name is a thoughtcrime. 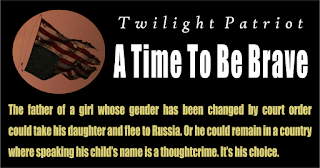