How the Federal Reserve has Replaced the American Worker

If there were no trade deficits, there would be no loss of jobs overseas. But by allowing America to export fiat money in lieu of actual goods or services, the Federal Reserve has made workers unnecessary.

A lot of Americans hold some form of the opinion that the Chinese, or foreigners in general, are taking away their jobs. The common reaction, at least among the more unthinking portion of the population, is to demand restrictions on trade so that the United States can stop losing in the trade war.


Hence the burst of popularity that Mr. Trump experienced when he declared “I am a Tariff Man.” Trump has won the support of millions of American workers by promising not to let foreign workers replace them.

But while this voting bloc at least has more sense than the conservative intellectuals of yesteryear who saw the trade deficit as a good thing, they have not, for the most part, asked the question that really matters, which is: Why do we have a trade deficit in the first place?

The basic idea behind trade is that one party gives up something for another thing of equal value. If such a principle were followed in international commerce, one country’s workers would never find themselves replaced by another’s, since any imports would have to be paid for by an equal value in exports. Any jobs lost to competition with imports would be made up for by growth in export sectors.

And that was indeed how trade once worked, back in the days of gold and silver currency when the balance sheets had to balance, and no country could run a trade deficit. But now, in the days of fiat money, America can get away with running up a $900 billion trade deficit. Our country avoids paying for its imports with an equal amount of exported goods, and it does this by exporting fiat money instead.

The Chinese are not to blame. It is the Federal Reserve that has replaced the American worker.

China, and other foreign nations, aren’t so much beating us at a trade war as they are lending us the money to buy their own products. And it’s a strategy that won’t last forever.

Foreign workers are exchanging the fruits of their labours, not for an equal value of our goods and services, but for debt that will probably never be repaid. The dollar-denominated securities that they getting in exchange are in high demand at the moment, but eventually America will cease to be the world’s dominant economy, and the dollar will lose a lot of its value.

In the long run, foreign workers stand to lose just as much as American workers. And ultimately the blame for this lays at the feet of an economic system which has taken the power to create wealth away from workers – namely, gold and silver miners and the other laborers who create things for which gold and silver can be exchanged – and put that power into the hands of central banks.

Workers in foreign countries are being taken advantage of by the Federal Reserve. And workers in America itself are becoming increasingly unnecessary, because bankers can create fiat money to be exported in lieu of actual industrial or agricultural products.

American workers don’t need a Tariff Man to advocate for their cause. Free trade is beneficial to everyone so long as hard money forces both sides to offer goods of equal value. The ideas of Ron Paul offer a way out of this mess, but at the cost of changes that neither party’s mainstream is willing to make.

The status quo, with America as a pirate state which loots other countries’ wealth by exporting its worthless fiat currency, is appealing to the monied interests which control the Federal Reserve, and which own most of Congress. But remember, pirates who live off of loot have no need for honest workers.

The choice, for the American working man, is to either support the cause of sound money, or else accept his replacement by the Federal Reserve. 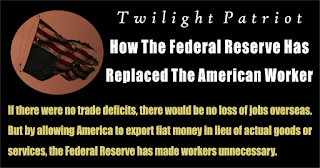