The Democrats present themselves as the party of the environment. But their rejection of nuclear power and indifference toward the problems with solar and biofuels prove their concern to be a sham.

Last November, Arizonians such as myself voted on a ballot initiative that was presented as a “Clean Power Plan.” On the surface, it looked straightforward enough: each year, an increasing percentage of the state’s electricity had to come from carbon-free sources; this would level out at fifty percent in 2030. However, not all carbon-free sources were equal, and the law specifically excluded nuclear power and pre-1997 hydropower.


The irony of this is that the Hoover Dam and Palo Verde Nuclear Generating Station together produce a third of Arizona’s power, and the Democrats’ plan would have shut them both down. The leftists had seen a state that, to begin with, had cleaner energy than America as a whole, and their response was to attack the most proven and reliable methods of producing carbon-free electricity. Thankfully, Arizona’s voters rejected the proposal by a two-to-one margin.

When it comes to nuclear power, the plain fact of the matter is that America has had the technological means to produce abundant, carbon-free electricity since the 1950s, but, from the 1970s onward, has lost interest in doing so. And all of the Democratic Party’s blather about climate change should be viewed in light of their refusal to use the one good tool at hand to stop it.

Granted, the Republicans do themselves no favours by denying that global warming exists. I myself used to be a climate denier, but I have since re-evaluated my position. The facts, as I now perceive them, are as follows:

1)      Carbon dioxide is heating the planet, but the actual dangers posed by climate change are vastly exaggerated by the press.

2)     The benefits of fossil fuels outweigh their drawbacks, as a degree or two of warming is preferable to a return to preindustrial technology.

3)     Nevertheless, mankind must adopt nuclear power in order to sustain civilization in the long term, and the sooner we make this change, the better.

And this is a change that will never be made as long as people like Al Gore have their way. The plain fact is that solar power, wind, and biofuels require far too much land, and produce energy far too unreliably, to ever provide enough clean energy to sustain a modern civilization.

Michael Schellenberger, an environmentalist who abandoned his youthful fancies of wind and solar power and now advocates for nuclear instead, explained his reasoning in a well-written article at Quillette, entitled Why Renewables Can't Save The Planet. Here is a brief excerpt:

“Solar farms have large ecological impacts. Building a solar farm is a lot like building any other kind of farm. You have to clear the whole area of wildlife.

“In order to build one of the biggest solar farms in California the developers hired biologists to pull threatened desert tortoises from their burrows, put them on the back of pickup trucks, transport them, and cage them in pens where many ended up dying.

“As we were learning of these impacts, it gradually dawned on me that there was no amount of technological innovation that could solve the fundamental problem with renewables.

“You can make solar panels cheaper and wind turbines bigger, but you can’t make the sun shine more regularly or the wind blow more reliably. I came to understand the environmental implications of the physics of energy. In order to produce significant amounts of electricity from weak energy flows, you just have spread them over enormous areas. In other words, the trouble with renewables isn’t fundamentally technical—it’s natural.

“Dealing with energy sources that are inherently unreliable, and require large amounts of land, comes at a high economic cost….

“I used to think that dealing with climate change was going to be expensive. But I could no longer believe this after looking at Germany and France.

“Germany’s carbon emissions have been flat since 2009, despite an investment of $580 billion by 2025 in a renewables-heavy electrical grid, a 50 percent rise in electricity cost.

“Meanwhile, France produces one-tenth the carbon emissions per unit of electricity as Germany and pays little more than half for its electricity. How? Through nuclear power.

“Then, under pressure from Germany, France spent $33 billion on renewables, over the last decade. What was the result? A rise in the carbon intensity of its electricity supply, and higher electricity prices, too….

“Thanks to their energy density, nuclear plants require far less land than renewables. Even in sunny California, a solar farm requires 450 times more land to produce the same amount of energy as a nuclear plant.”

Land use is, in my opinion, a bigger threat to the environment than carbon dioxide. We know from the geologic record that there were times when carbon dioxide levels were ten or twenty times what they are today. The climate was radically different, but life made it through.

On the other hand, human beings are currently occupying or utilizing some three fourths of the Earth’s land, leaving only about 25 percent as wilderness. An increase in land use by only a third would wipe out the remaining natural ecosystems. If you look at the environmentalist cause in light of this fact, then solar power and biofuels are the worst candidates to meet mankind’s future energy needs.

But even if you accept the Democrats’ thesis, that carbon emissions are the main threat, their policies still prove useless. All of the harassment which the left dealt out to American coal, oil, and gas producers during the Obama administration, and which is continuing through the judiciary under Trump, did nothing to reduce fossil fuel consumption. We just burned imported fuel instead.

Democrats have never tried to curtail fossil fuel imports. It seems they are fine with carbon emissions, as long as any new jobs go to the Arabs or the Russians instead of to the Americans.

The Democrats have done a good job building an image as the party that cares about the environment. And the Republicans haven’t even tried to look like they care. But in politics, caring about something or somebody is nearly always an illusion. You need to examine the actual policies – and on policy, the Democrats fail miserably.

They claim to be concerned about carbon dioxide and global warming, but rather than embrace nuclear power, the one way to meet mankind’s energy needs carbon-free, they just harass American industry while leaving our dependency on foreign oil in place. And Democrats completely ignore the threats to the environment posed by their own boondoggles, such as the sprawling wind farms, solar farms, and biofuel plantations which their legislation has forced on many states.

Democrats’ dead-end environmentalism doesn’t fool me, and it shouldn’t fool anyone else, either. If you’re concerned about the future of the planet, then don’t vote Democrat. 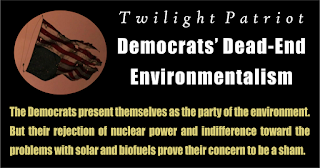