The Economy is Smaller than in 2000

The government cooks the books on inflation. If you compare economic output to actual commodity prices, you'll see that America's total GDP has decreased since the turn of the century.

According to President Trump, “we are considered far and away the hottest economy anywhere in the world,” and “our economy is thriving like never before.”

But he was going to say that no matter what. What nobody in the government will admit is that real per-capita GDP is down 25% since the turn of the millennium.

Except that it isn’t true. The government understates inflation in order to pay out less social security, and avoid the embarrassing admission that our economy peaked in the 1990s and has been going downhill ever since. To see how much the dollar has really declined, just look at the price changes in some actual commodities.

If we are to believe the Federal Reserve’s line – that a dollar today is worth 68¢ in 2000 – then prices should only have gone up by a factor of 1.47. But except for oil, all the prices have gone up way more than that. The geometric mean of those six increase factors is 2.31. By that calculation, your dollar today is worth only 43¢ in 2000’s money.

So how does the Fed get its phony numbers? It uses something called the Consumer Price Index (CPI), a big list of prices of things that urban people buy. When buying habits change, so does the composition of the index. If, due to the bad economy, people start buying cheaper and inferior products, the CPI treats those new products as equivalent and doesn’t register a decline in real income.

Example: Plantains, a fruit which looks like a banana but taste like a cross-breed of potatoes and styrofoam, might be substituted for actual bananas during a recession. So the CPI regards them as equivalent, and the lower price (which was paid in exchange for a lower-quality good) tilts the measured inflation rate downward.

Those are the facts. And remember, because of rising income inequality, median household income has done even worse. It went from $40,750 in 2000 to $61,370 today, a decline to 65% of what it once was, when you factor in actual inflation.


I started out this post by criticizing President Trump. I’m still going to vote for him next year, because Republicans are still the better of the two parties. But they’re not going to turn this country around – no one is – and people need to realize that. 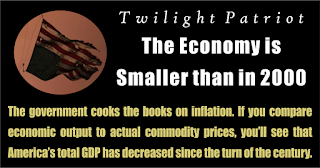